Jim Goose, more commonly known as "Goose" is the secondary protagonist of George Miller's post apocalyptic film Mad Max. He was the best friend of Max Rockatansky and is also a cop. Goose was played by Australian actor Steve Bisley.

Goose was a main force patrol officer notable for his pursuit experience on an MFP Motorcycle. Goose is first seen at a cafe, hearing some sirens wail past, he ran out to follow the pursuit. However, before Goose could catch up with the rest of the MFP, he skidded to a halt over the chassis left behind by Nightrider and the others. Despite the crash, Goose remained alive - though injured, claiming to Max jokingly: "Nothing a year in the tropics can't fix."

The next day Goose was seen to be using crutches and leg braces due to his accident. It is here that Goose and the Mechanic, Barry, enticed Max with the Pursuit Special as eye candy to keep him on the force. Later that day, Goose and Max came across a dismantled vehicle - the wreckage of a vicious encounter with Toecutter's gang. A woman remained, who seemed to have been sexually abused by Johnny The Boy, who had hung around the wreckage afterwards. Goose and Max arrest him and take him to the Halls of Justice for trial.

Goose then proceeded to violently abuse Johnny whilst he was being held captive in the Halls, mocking and humiliating him. However when it was revealed that no witnesses showed in the courtroom, the courts declared the case: "no contest" which released Johnny from imprisonment. Goose became irrational and furious with such news, attempting to beat Johnny to a pulp as he tried leaving the courtyard, but was held back by fellow officers. Goose being distressed left for drinks at a nightclub where he managed to woo one of the singers. Meanwhile, the threatened Johnny managed to sabotage Goose's bike. The following morning as Goose left for work, Goose's bike cut out, resulting in him falling from it. The ever-strong Goose didn't suspect sabotage and called for help to carry himself and his bike away. However as he drove back once more along the Outback roads, Johnny managed to finally finish Goose off in cold-blooded revenge by throwing a brake drum through his windscreen - distracting Goose and resulting in his uncontrollable careening off of the road. As Goose lay helpless and upside down, Toecutter persuaded Johnny to finish Goose off, giving into his persuasion, Johnny lit a match and threw it in the direction of Goose's leaking fuel.

Although this looked to be the end of Goose, interestingly he managed to survive the explosion although he became something completely unrecognisable by Max when he visited the hospital. It's up to debate on what happened to Goose from here on, however if civilization collapsed as the latter films speak of, it's unlikely Goose was kept in a stable condition at the hospital Max visited him and is presumed deceased as far as Max's life is concerned. 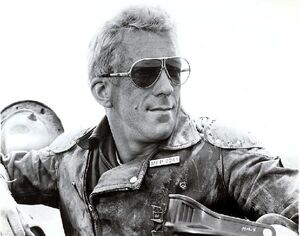 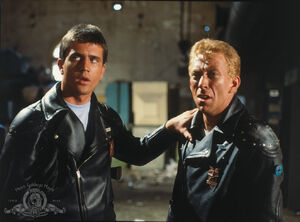 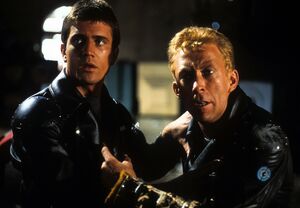 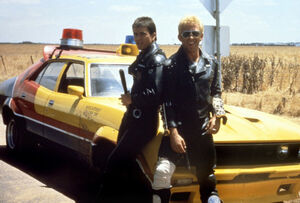 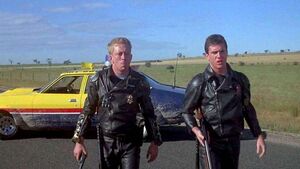 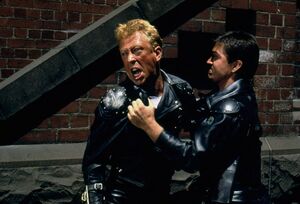 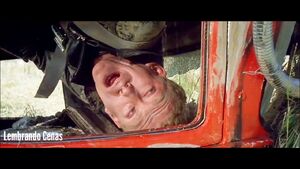 Goose gets outta the picture 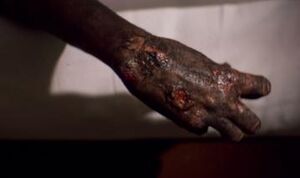 Retrieved from "https://hero.fandom.com/wiki/Jim_Goose?oldid=1796189"
Community content is available under CC-BY-SA unless otherwise noted.