Find Treasure Planet so his home can be rebuilt (succeeded).

He was voiced by Joseph Gordon-Levitt as a teenager (who also portrayed John Blake) and Austin Majors as a little boy. In the Japanese dub from the movie, he was voiced by Haruhiko Kato.

Jim is a very adventurous, rebellious, and caring young lad, as well as very handsome and attractive for a 15-year-old. During the beginning of the film, he was a stereotypical, alienated teenager, constantly in trouble and "like a stranger" to his mother Sarah. In the DVD's Visual Commentary, the directors said that to emphasize Jim's "Bad Boy" reputation, they added the black jacket, and the shadow or "eye-mask" over his eyes. By the end of the movie, however, he no longer wears the jacket, and the eye-mask is gone. At first, Jim is stoic and guarded, but as time goes on, he begins to open up, and at the end of the movie, he becomes a much more open, confident and happier young man.

Jim is also very brave, selfless, strong-willed, independent, and loyal to his allies. He is also friendly and willing to help strangers, especially if they are injured or lost; this is shown when he encountered Billy Bones, a creepy but harmless and wounded salamander-like alien pirate who was in need of help, and Jim immediately tended to the poor old alien without hesitation, and according to his mother, Jim would always find stray pets and beg his mother to let him keep them, showing that Jim is kind and compassionate towards animals. Jim is also very intelligent for a lad of his age; so intelligent that he is very skilled in technicians and mechanics and was able to build his own solar surfer all by himself when he was 8 years old, and he was able to fix up the late Captain Flint's spaceship in just a few minutes when he was 15 years old. He is also pragmatic and logical, more than people give him credit for.

Despite his great intelligence and pragmatism, he can do very reckless things, such as him breaking the law countless times, which caused him to get into trouble with the police; when he flew John Silver's space longboat into a passing comet regardless of the possible dangers the comet could have caused to the longboat or Silver or Jim himself; and when he recklessly insulted Scroop without taking any regard for his own safety or even what it would do to his mother if he were to be killed by Scroop because of Jim's reckless behaviour. Regardless of his reckless side, Jim can be very cautious and serious if the situation presented itself. At first, Jim was quite spoiled, broody and pessimistic, but in the end, he became much more mature, responsible and optimistic (he can be described as a pragmatic optimist).

He is also fun-loving, jokey, sarcastic, mischievous, charismatic, and very dreamy. He likes playing around with Morph, but he can get annoyed by the little floating pink blob of mischief sometimes, and the same can be said for B.E.N., who gets on Jim's nerves fairly often, especially when B.E.N. talks too much or touches Jim too much. Nevertheless, Jim does consider B.E.N. a good friend and a useful sidekick (also, Jim learned to accept B.E.N.'s hysterical and annoying habits somewhat and even enthusiastically hugs B.E.N. back when B.E.N. hugs him for saving everyone from Treasure Planet's destruction). He is also usually honest, yet quite private, and hardly ever lies; he only lies if he feels that he really has to. Jim can also be very sweet, innocent and polite, and cares greatly for his allies and will protect and defend them from anything and anyone. Jim is also very forgiving, shown when he forgave Silver for his antagonistic actions throughout the film and particularly when Silver chose to save Jim's life instead of Flint's treasure. Jim also allowed Silver to sneak away from the RLS Legacy, instead of informing Captain Amelia and having Silver arrested, showing that Jim has completely forgiven Silver and accepted him as his friend and father-figure again.

Ultimately, even with his few flaws and his bad-boy exterior, Jim has got a heart of gold and refuses to embrace the typical greedy and ruthless pirate life like his pirate enemies, especially his nemesis Scroop, who is the exact opposite in personality to Jim.

When he was a toddler, Jim was very energetic, lovable and obsessed with reading pirate books.

Although he is human, Jim possesses a few remarkable abilities, including one that no other human character in Disney has shown before.

As a little boy, he admired stories of the legendary space pirate, Captain Nathaniel Flint.

But then his father, Leland abandoned Jim and his mother when he felt he couldn't handle the responsibility of being a husband and father. As Jim grew older, he became a rebellious teenager, soaring a solar surfer and getting in trouble with the police.

Jim felt guilty after hearing his mother discuss her troubles with Dr. Doppler.

Then, Jim found a crashing spacer named Billy Bones who had a special chest that contained something a mysterious cyborg was after.

Jim discovered that inside Bones' chest was a map. This map led to Treasure Planet, encouraging him to embark on a life-changing adventure, accompanied by Dr. Doppler.

Jim was assigned as a cabin boy for John Silver, the ship's cook and a cyborg. At first, Jim did not trust him because of the mysterious cyborg that was after Billy Bones, and Silver drove him crazy with chores.

But as the voyage's time passed, Jim and Silver had a father-son relationship, which Jim never had.

However, Jim and Silver had some friendship flip-flops. When Jim's confidence was low about failing to keep Mr. Arrow , the captain's first mate, alive from a space storm, Silver did not tell Jim that his monstrous nemesis, Scroop murdered him.

Jim later found that out when eavesdropping on his conversation with the rest of the crew about mutiny.

Jim also learned that Silver cared more about the treasure than Jim, which left Jim heartbroken and hurt. After the pirates attacked and mutiny began, Silver tried to apologize to Jim about what he said.

He explained that if Scroop and the other spacers knew he was kind, they both would've been killed.

Even when Silver made a bargain that would make up for this whole mess, Jim refused.

When the planet's self-destruct mode was activated, Jim almost fell to his death while Silver had to choose between the treasure he's searched for years and the young man he had to come to love, deep down.

Silver chose Jim and they both had a part in saving the whole crew from destruction. Before Silver escaped, he and Jim had a heart-warming goodbye, and Silver asked his pet shift-shaper, Morph to remind Jim of him.

Before the film ended, Jim saw a cloud-shaped version of Silver, whose cyborg eye twinkled at him. 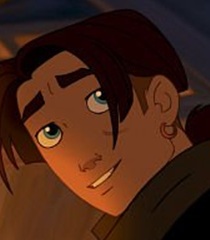 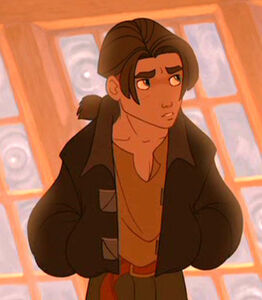 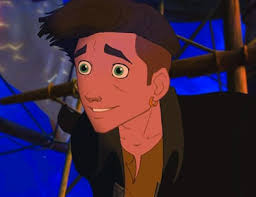 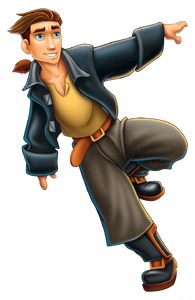 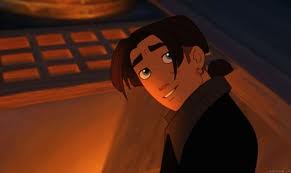 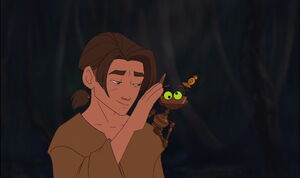 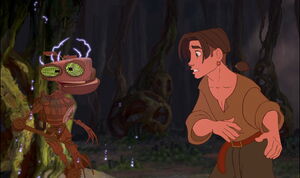 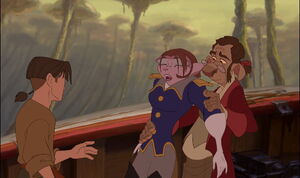 Jim with Doppler and Amelia 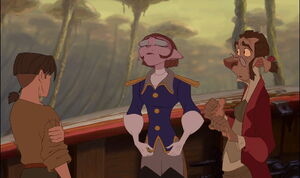 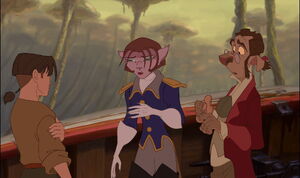