Jim is the leader of Raynor's Raiders, a rebel group fighting against the corrupt and totalitarian Terran Dominion ruled by Emperor Arcturus Mengsk, having defected after Mengsk abandoned Kerrigan to the Zerg.

He is voiced by Robert Clotworthy.

Raynor is simple, honest, direct and passionate. He does what is right, even if it's the difficult choice. He won't go looking for trouble, but he won't run if it comes looking for him.

Raynor developed a very close relationship with Tassadar, Zeratul and Fenix. His close relationship allow many protoss to consider him like a brother. From there he was one of the few terrans to gain widespread trust and respect amongst the protoss, to the point of some considering him a hero as well.

Raynor's musical preferences lie in country rock. As a teen, he wasn't fond of classical music. He doesn't hate easily, but when he does so, it's intense.

Making his debut in the very first Terran mission, Raynor is a marshal of the backwater planet, Mar Sara, and was stationed on the planet when the Zerg suddenly invaded it. While Raynor fought valiantly to protect the colony, he was eventually arrested by the very confederacy he was trying to protect due to his destruction of a confederate owned Command Center which was, at the time, infested by the Zerg.

During his time with the group, Raynor develops a bond with the female ghost, Sarah Kerrigan. Near the end of the Terran campaign, the Sons of Korhal mount a large offensive on the Confederate capital of Tarsonis with the Zerg, luring them with Psi Emitter technology. However, during this offensive, Kerrigan and her contingent of Terran forces are assaulted by the Zerg, and Mengsk abandons them to their death. This infuriates Raynor, causing him to leave the rebel group by force, hijacking Mengsk’s flagship, the Hyperion, in the process.

Raynor soon hears telepathic messages from Kerrigan in his dreams. Believing her to be alive, Raynor travels to Char only to find Kerrigan completely infested and controlled by the Zerg. Destroying his camp, Kerrigan allows Raynor and his troops to leave, though they are still stranded on the planet. Raynor and his troops eventually encounter Tassadar and Zeratul, great Protoss templars. In the Protoss campaign, a force lead by Executor Artanis rescues Raynor and Tassadar from Char. Raynor and his remaining forces then aid the Protoss in the final assault on the Zerg Overmind which recently nested itself on the Protoss homeworld of Aiur.

Raynor makes occasional appearances throughout the events of Brood War. First, during the Protoss campaign he, along with Fenix, assisted in the evacuation of Aiur, protecting the warp gate while Protoss forces used it to move to Shakuras. It is here where he and Fenix develop a strong friendship and a deep respect of each other. Later, Kerrigan convinces him and the Protoss that the United Earth Directorate invasion is a much greater threat to them than she is. Raynor and Fenix then kidnap Mengsk in order to gain his support in the campaign against the UED. Soon after, Korhal IV, the new throne world of the Terran Dominion is recaptured by the allied forces. Soon after this, however, Kerrigan betrays the alliance, casually slaying Fenix and Edmund Duke, Mengsk's second-in-command, in the process. Deeply outraged by Kerrigan’s actions, Raynor’s final words in Brood War are a vow that Kerrigan will die by his hands.

Jim Raynor and his ragtag group of rebels, Raynor's Raiders, are the focus of the Terran campaign in StarCraft II. Most of the relations between Jim and his crew are revealed on his ship, the Hyperion. While his best friend Matt Horner still has faith in him, even his old friend, a convict named Tychus Findlay, is in constant conflict with him due to their different views of the war with the Dominion.

After the events of Brood War, Raynor returns to Dominion space to wage war against Mengsk, but his forces have gradually been weakened in their struggle against the Dominion's seemingly inexhaustible resources. As a result, Raynor's Raiders are forced to take up occasional mercenary work to fund their campaign. Raynor has started drinking heavily, blaming himself for losing Kerrigan to the Zerg, and the death of his close friend Fenix, with his hatred of Mengsk constantly being fed through a stream of Dominion propaganda attacks on him and his men. A chance meeting with an old friend works to Raynor's favour, as Tychus Findlay offers him an opportunity to gain money for the Raiders by collecting a mysterious artifact. Tychus himself serves a mysterious man who is part of the Moebius Foundation, a research collective interested in acquiring Xel'Naga artifacts for a purpose not revealed until near the end of the campaign.

At this time, Raynor and Tychus lead a group to search for Kerrigan whom they find weakened in an empty Zerg hive. Although she hasn't fully been purged of her Zerg infestation, she has regained her original personality and appears mostly Human. She opens her eyes and looks at Raynor, seemingly unable to speak. It is in this moment where Tychus reveals he has been working for Emperor Mengsk all along and attempts to kill Kerrigan. He ultimately fails in this endeavour as Raynor defends her by shooting Findlay. Raynor is last seen carrying Kerrigan out on to Char telling her that everything will be okay.

Heart of the Swarm

In Heart of the Swarm Raynor was captured by Nova and was supposed to be executed but instead Mengsk keep him alive to prevent Kerrigan from attacking Korhal. Raynor was rescued by Kerrigan but was not very happy to see Kerrigan infested again. Despite this he helped Kerrigan get revenge on the man that abandoned her to the Zerg and saved Kerrigan from being killed.

Raynor became a commander in the Dominion military and was put in charge of protecting the terrans from Amons forces. Later he helped Kerrigan and Artanis launch their final assault against Amon in the Void. After the End war ended he was sitting at a bar where a human kerrigan asked if he is ready to go and he did. Raynor was never seen again afterwards. 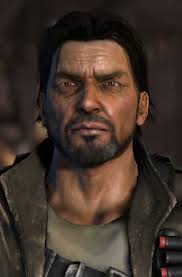 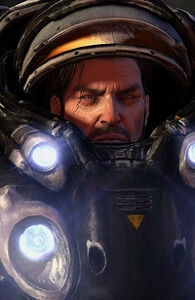 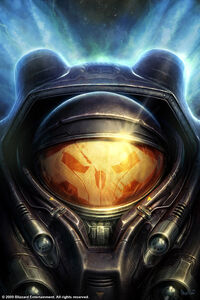 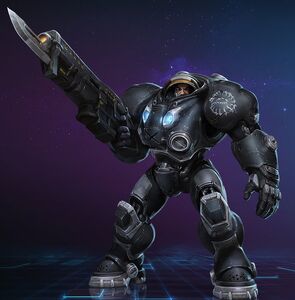 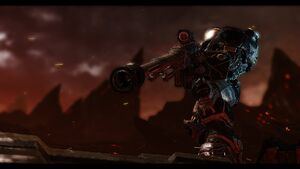 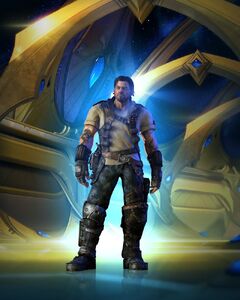 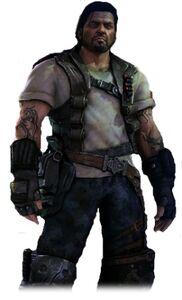 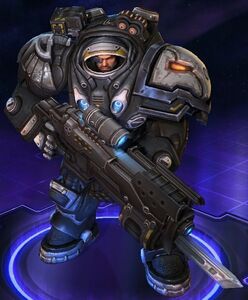 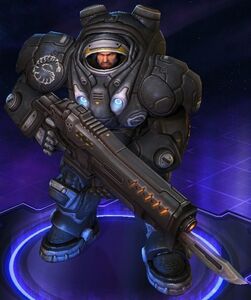 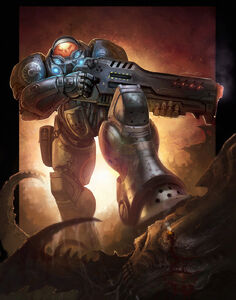 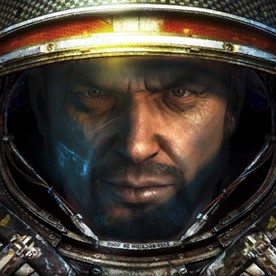 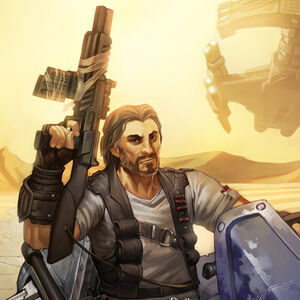 Retrieved from "https://hero.fandom.com/wiki/Jim_Raynor?oldid=1836255"
Community content is available under CC-BY-SA unless otherwise noted.