Western Lawful
Captain James T. "Jim" West is the main protagonist of the TV series Wild Wild West, and the 1999 film based on it.

He is a guns-a-blazing secret agent cowboy.

The story takes place four years after the end of the American Civil War in 1869, U.S. Army Captain James T. “Jim” West and U.S. Marshal Artemus Gordon hunt for ex-Confederate General"Bloodbath" McGrath throughout Southern America due to being responsible for a massacre in a settlement called New Liberty where many of the freed slaves were murdered, including West's parents. U.S. President Ulysses S. Grant promptly informs the duo about the disappearance of America's key scientists and a treasonous plot by McGrath; he assigns them to find the scientists before he inaugurates the Transcontinental Railroad at Promontory, Utah.

On board their train The Wanderer, Gordon examines the severed head of murdered scientist Thaddeus Morton using a projector to reveal the last thing he saw. Finding McGrath and a clue in the image, he and West head to New Orleans while pursuing a lead about Dr. Arliss Loveless, an ex-Confederate mad scientist in a steam-powered wheelchairwho is hosting a party for the elite of Southern society. During the party, Gordon roams the mansion where he comes across and rescues a caged woman named Rita Escobar. Once West, Gordon and Rita flee to The Wanderer, Rita asks for their help in rescuing her father Professor Escobar, who is one of the kidnapped scientists.

Later, Loveless hosts a reception to demonstrate his newest weapon, a steam-powered tank that uses McGrath's soldiers as target practice. Angered by this, McGrath threatens to shoot Loveless but the latter instead shoots before he could do so after accusing him of "betrayal" for surrendering at Appomattox. As Loveless and his posse head to Utah, West, Gordon and Rita find McGrath who, before he dies, reveals that he was framed by Loveless for the New Liberty massacre and that Loveless used his tank to kill his people there. The trio then pursue Loveless on The Wanderer, but having expected their arrival and using steam-powered hydraulics, Loveless maneuvers his train behind The Wanderer. West manages to disable Loveless's train, but not before Loveless uses a cannon-launched grappling hookto stop The Wanderer. Afraid of being recaptured by Loveless, Rita grabs one of Gordon's explosive rigged pool balls as protection but accidentally releases sleeping gas that knocks out West, Gordon and herself.

West and Gordon wake up as Loveless and his posse pull away in The Wanderer while taking Rita hostage and announcing his intentions to capture President Grant at the golden spike ceremony in Promontory Point and that West and Gordon will be killed should they step outside of the trap they are in. Escaping the trap, the duo stumble across Loveless's private railroad that leads to his industrial complex hidden in Spider Canyon. There, the two witness Loveless's ultimate weapon, an 80 ft. mechanical spider armed with a nitroglycerin cannon which Loveless uses to capture Grant and Gordon while West gets shot by one of Loveless's bodyguards after sneaking inside.

At his industrial complex, Loveless reveals that he intends to destroy the United States with his mechanized forces unless Grant agrees to divide the states among Great Britain, France, Spain, Mexico, the Native American people and himself. When Grant refuses to surrender, Loveless orders Gordon to be shot, but West – who had survived thanks to a chain mail vest Gordon gave him earlier – disguises himself as a woman to distract Loveless, allowing Gordon to set free the scientists. Unfortunately, Loveless escapes on his spider in the ensuing battle, taking Grant with him.

To save Grant, Gordon and West crash onto the spider via a flying machine as Loveless destroys a small town in an attempt to force Grant to sign the surrender. After West defeats Loveless' henchmen below, a fight ensues between him and Loveless, who is now on mechanical legs. Using a small gun, Gordon shoots at one of Loveless's mechanical legs, allowing West to gain the upper hand and for Gordon and Grant to defeat Loveless's guards. Pleading for his life, Loveless drags himself back to his wheelchair as the spider approaches a cliff. Loveless attempts to shoot West with a concealed gun, but instead hits the spider's steam pipes, stopping it in time before it could plunge into the canyon. The abrupt stop leaves West and Loveless hanging precariously from the spider; Loveless tries to decide whether or not he should pull the chair's lever that will release them, knowing it will send both him and West to their deaths if he does so. West decides to pull the lever himself and survives by grabbing the ankles of one of the henchmen he threw out earlier, while Loveless falls to his death.

Later, Grant promotes Gordon and West as Agent #1 and #2 of his new U.S. Secret Service. Gordon asks which of them is one and two, but Grant brushes off the question as unimportant and tells them they will have plenty of time to talk about it on the way back as he takes The Wanderer since his own train was destroyed by Loveless earlier. Once Grant leaves, West and Gordon reunite with Rita, whom they both attempt to court, but she foils them by revealing that Escobar is actually not her father but her husband. Gordon and West then ride into the sunset on the spider. 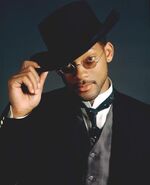 Add a photo to this gallery
Retrieved from "https://hero.fandom.com/wiki/Jim_West?oldid=1745697"
Community content is available under CC-BY-SA unless otherwise noted.