The Lightning of Fate (TK3)

Bathing in the forest.

Put an end to his Mishima family's cursed bloodline.
Find his missing mother Jun Kazama.
Kill Kazuya.
Kill Heihachi (gave up after Tekken 4 and never meet him again and ended in Tekken 7 after Kazuya killed him).
Obtain ultimate power (Tekken 3, 6 and 7).
Destroy Ogre (apparently succeeded, but implied he can regenerate in time).
Destroy Azazel (succeeded).
Keep the world in a chaotic state. (TK6)
Destroy every evil spirit he meets.
Save the world by killing Kazuya (TK7).

Jin Kazama is ultimately the main protagonist (along with Lars Alexandersson and Kazuya Mishima) of the Tekken series and is an anti-hero in Tekken 6 as well as one of two main antagonists alongside Azazel and later a supporting character in Tekken 7. He is also known as the Child of Destiny, as well as one of the characters to have wings.

Jin's actions and surroundings fit the mold of a quintessential "," except for his lack of a tragic flaw.

Jin has a very complex personality. He has the kindness of his mother, Jun Kazama, and his grandmother, Kazumi Mishima. He has the fighting spirit and determination of his half-uncle, Lars Alexandersson and his great-grandfather, Jinpachi Mishima, and also has the hidden and personal silence of his legal uncle, Lee Chaolan. He also has the anger of his father, Kazuya Mishima and his grandfather, Heihachi Mishima. He also has a slight resemblance to his cousin, Asuka Kazama, at times.

Jin's personality ranges from calm to angry at various moments, and his words and actions hint toward the bitterness within. He also has one personality trait which is common with many Japanese action heroes. Once Jin's mind is focused in any particular direction, it is very difficult to get him to change or even notice the events and people around him. People close to him, including his friends Ling Xiaoyu and Hwoarang, are always going to extremes to gain Jin's attention, and yet, he rarely seems to notice. It is known, however, that he will help them if they need it, as Ling Xiaoyu's Tekken 4 profile and Hwoarang's Tekken 4 ending have shown.

Jin's disinterest in close relations probably has one unique motivation. As a result of his family's Devil Gene, Jin knows that people close to him will likely suffer or worse if he ever completely loses control.

Jin is a Japanese male with black hair that is spiked upwards, in a style similar to the hairstyle of his father, but with the bangs of his mother. In fact, in the early screen showings of Tekken 3, many fans assumed that the yet unnamed Jin Kazama is Kazuya in his early teen years, due to their similarities. Jin is also very muscular and toned, as evidenced by his large biceps, visible abs, and pectoral muscles.

Jin has a black mark on one of his arms, which Devil has branded onto him.

Jin has worn many outfits in the course of the Tekken series. Many of these outfits feature flames on them, and with the exception of a single outfit in Tekken 6, he always wears either gloves or gauntlets.

Jin's actions and surroundings fit the mold of a quintessential "tragic hero", excluding the lack of a tragic flaw as of Tekken 6. As with many tragedies, all of the major traumatic events that occur within the hero's life are beyond his control:

First and foremost, there's the fact that his grandfather and father are two of the evilest and ruthless individuals who've ever lived on the face of the earth. Secondly, his mother was cruelly and abruptly taken from him while he was still a teenager. Third, he was betrayed by his grandfather, whom he trusted deeply. Fourth, the return of his great-grandfather, Jinpachi Mishima, has caused him to begin losing his internal struggle with the Devil within. Fifth, the appearance of Azazel prompts him to corrupt the Mishima Zaibatsu further just for the chance to face the beast and sacrifice himself to destroy it. Each of these occur to a helpless and unassuming Jin, who is simply doing what he can to set things right at every turn.

It is known that Jin used to be "sweet and nice" (as described by Xiaoyu and mentioned by other characters), before all the above-mentioned events happened, however after everything he went through, he seems to have lost all his human feelings.

Jin's personality ranges from calm to rude and arrogant at various moments, and his words and actions hint toward the bitterness within. Although he is portrayed as a monster in his Devil form, in general, he is never portrayed as evil (unlike Kazuya and Heihachi), and everything that he does, he does for what he perceives as necessary.

He also has one personality trait which is common with many Japanese action heroes. Once Jin's mind is focused in any particular direction, it is immensely difficult to get him to change or even notice the events and people around him. People close to him, including Hwoarang and Ling Xiaoyu, are always going to extremes to gain Jin's attention, and yet, he maintains an indifferent demeanor towards them.

Jin's disinterest in close relations perhaps results from the Devil Gene. As a result of his family's bloodline curse, Jin thinks that the people he loves will likely suffer, if he ever completely succumbs to the Devil Gene or becomes one with it like his father. In short, during Tekken 4, Jin planned to destroy his father and grandfather and then himself, dying without children to put an end to the Mishima curse once and for all. However, Jin could not go through it after defeating his two predecessors, so it's unknown if he has given up on this plan completely since he saw the image of his mother Jun.

In the events of Tekken 6, Jin uses his new position as the CEO of the Mishima Zaibatsu to throw the world into chaos in hopes of a cure, although his intentions are entirely benevolent, since he seeks to use this to awaken and then destroy a much greater threat, Azazel. Believing that defeating this monster could help get rid of his curse, Jin might have destroyed countless people's property, ruined many lives and won lots of enemies through his actions. This may mean that Jin (no matter how painful it is for him) is willing to go out of his morals if that is what it takes to save the world. This again shows that no matter how indifferent and arrogant Jin seems to be, he is still a good man.

In Street Fighter X Tekken, Jin is depicted as being rebellious and hostile towards most people. He prefers to be alone and does not want others to interfere in his fights (as shown in the dialogues and quotes). He also seems rude (in the dialogues) and keeps telling Xiaoyu to stop following him. In their ending, however, Jin seems to care about his friend Xiaoyu, when he gets affected by the Pandora and tells her to stay away, not willing to hurt her.

In Namco X Capcom, Jin is still in touch with a fellow cursed martial artist: Ryu from Street Fighter, who also seeks to remove the Satsui no Hado within him.

Unlike Street Fighter x Tekken, Jin doesn't seem to be so arrogant and rude in Project X Zone and it's sequel. He seems more calm and kind-hearted, (even to Xiaoyu); he avoids killing Heihachi when he had several opportunities. Jin is shown to be very reluctant to the other characters from different games when he was joining to fight off monsters or demons as well as aiding Ryu and Akira from Virtua Fighter to fight off Seth who targets both him and Ryu in order to use his BLECE machine. But towards the fight against the main antagonist and final boss, Meden Traore, his wife, Due Flabellum, and the Belanos Brothers. Jin is shown to be a serious and very determined person and can assist the other characters including his grandfather Heihachi and Xiaoyu whenever he can, especially both protagonists, Kogoro Tenzai and Mii Kouryuji, to put an end to their misery. This was carried on when having an uneasy alliance with his father, Kazuya, to save the world with the other Namco Bandai, Capcom, Sega and Nintendo heroes from Ouma's plot.

The young head of the massive Mishima Zaibatsu. Jin possesses the "Devil Gene," giving him the potential for the superhuman combat powers of a devil. He is aware that the power of the Devil Gene growing stronger within him every day. Knowing that eventually he is fated to lose control and go on a terrible rampage, he creates a plan intended to cut him free from his cursed bloodline. He has a deep hatred of his father Kazuya and his grandfather Heihachi, who both continue to hound him for their own selfish reasons. Although he learned Mishima Style Fighting Karate from Heihachi, he has since broken with the Mishima Style. He now fights using traditional karate (based on Kyokushin). 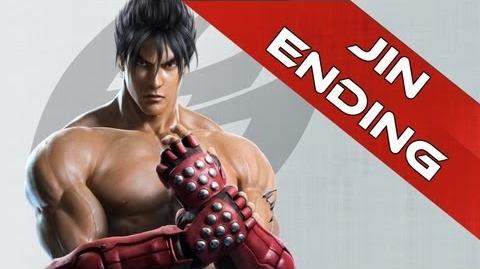 Retrieved from "https://hero.fandom.com/wiki/Jin_Kazama?oldid=1695067"
Community content is available under CC-BY-SA unless otherwise noted.