to aid all of humanity

Jinn is a magical being held inside the Relic of Knowledge. She can be summoned by the Relic-holder calling out her name, at which point Jinn can answer three questions every one hundred years. She is voiced by Colleen Clinkenbeard, who is also the English voice actress for Monkey D. Luffy, Erza Scarlet, Riza Hawkeye, and Momo Yaoyorozu.

Jinn's appearance is that of a voluptuous blue woman much larger than a normal Human. She has elongated pointed ears and long, flowing dark blue hair. Her eyes are dark blue in the sclerae and pupils and a lighter blue in the irises. She appears nude-like aside from various gold accessories, most of which have a slavery theme: a chain headdress, big hooped earrings, the right ear also having an extra earring, a choker, bracelets with chains dangling from them along with a single bracelet on her left forearm, anklets and a belt of chains around her waist that ends in a big ring with three prongs. Trailing below her waist is a veil of a wisp-like smoke resembling the skirt of a dress.

Her accessories aesthetically derive from the Relic of Knowledge. Both the choker and the anklets are shaped like the band wrapped around the Relic's orb and the rings in Jinn's ears and belt look similar to the Relic's handle.

Jinn is a wise, humble yet blunt and straightforward being, answering questions and not holding back on any of the knowledge she presents. She can also be rather stern, as when she warns Ruby to not exploit the time stopping effects of her summoning. She also appears to be playful or nostalgic, calling Ozpin 'old man' when she sees him and finding some humor in Ruby's idea to use her for borrowed time. However, it is clear that she is in no way bound to Ozpin, ignoring his pleads to be silent, and only fulfilling her duties of answering the questions she is given.

Jinn is a powerful being created by the God of Light, and though the full extent of her powers are unknown, it is clear she is an omniscient keeper of knowledge and secrets. She knows the answer to any question and knows any secret or knowledge that other people possess or have witnessed, such as Oscar being the current incarnation of Ozma.

She also appears to be able to transport others into another dimension which she can freely control and shape at will in order to show her users visions or memories from the past. However, she cannot answer questions about the future - only present or past knowledge. Jinn is also able to sense if a person has a question for her when she is summoned. Upon answering a question, time stops, with the exception of the person asking a question and Jinn herself. She implies she has some degree of control over being summoned, as she alludes to not allowing herself to be "used" unless the user intends to ask a question.

Before recorded history, the God of Light created Jinn to aid Humanity in its pursuit of knowledge. She lives within the Relic of Knowledge, and she may answer three questions every 100 years when awakened. It is unknown how many questions she has answered, but she is familiar with Ozpin, greeting him as "old man". Previous incarnations of Ozpin have asked Jinn at least three questions.

Two weeks after the Battle of Haven, Ruby Rose awakens Jinn from her lamp as the heroes watch time stop around them. She introduces herself as a being the God of Light created to help Humanity in its pursuit of knowledge. She reveals she can answer two questions in this time period. Ozpin attempts to stop her from saying it, for he had told everyone there were no available questions. She pleasantly greets Ozpin, calling him "old man".

Ozpin begs Ruby not to ask anything, but Ruby asks what Ozpin is hiding from them. Ozpin rushes at Ruby, but before he can touch her, Jinn takes them to individual alternate planes with which she can answer the question. She begins her answer by showing a Human Salem, saying she was a lonely girl in a lonely tower a long time ago.

Jinn describes the forgotten history of Remnant much like a fairy tale. She recounts how Ozma rescued Salem from her imprisonment, the two falling in love. She narrates over Ozma's death from illness and shows how it resulted in Salem tricking the God of Darkness into resurrecting Ozma, only to have Ozma killed again and herself be cursed with immortality by the Gods for her deception.

Jinn shows how Salem took advantage of the gods and the peoples of the world, turning Humanity against the gods, only for them to wipe out all of Humanity except Salem and depart Remnant. Salem, now completely alone, Jinn said, still refused to blame herself for her fate. She returned to the Land of Darkness and leaped into the Grimm pool, hoping it would end her life. Instead, the pool corrupted her, giving her the chalk-white skin and hair, black sclera and red irises of her modern self, albeit her skin lacking its red markings.

Jinn shows the heroes that in a "realm between worlds," the God of Light told Ozma that his brother destroyed Humanity and that while it would one day return, it would return to a world without their presence. Instead, he left behind the four Relics, saying that when they are brought together, Humanity would be judged, and either the brothers would return to guide Humanity again, or, if they find them still fighting among themselves, the world would be destroyed. Until this happens, he would reincarnate in a way that ensures he would never be alone. Ozma refused at first, saying he would prefer to join Salem in the afterlife, but he accepted upon being told she still lived despite the God of Light's warning that she was no longer the woman he loved.

Jinn recalls tales of a few of Ozma's many lives upon his return to Remnant. In his travels of the world, his first reincarnation heard of a woman called "the witch." Ozma and Salem reunited and used their magic to form a kingdom, which they ruled over while raising four daughters.

Jinn tells that as Ozma became increasingly concerned about the harsh means by which he and Salem ruled. One night, one of their daughters interrupted their discussion to show that she learned to do magic. Ozma finally confessed to Salem of the mission the God of Light gave him, only for Salem to respond that there was no longer any point to redeeming Humanity, but rather they should replace them with their own line. This prompted Ozma to attempt to sneak their daughters out of the castle, but Salem stopped them. Salem and Ozma fought, causing significant damage to the castle. Lamenting that "we finally had freedom", Salem killed Ozma's first incarnation.

Jinn finishes her story by saying as Ozma reincarnated again and again, he decided that Humanity could not be redeemed without destroying Salem. Knowing that this cannot be achieved by mortal means, he hunted down the Relic of Knowledge and asked how to destroy Salem, to which Jinn responded simply "you can't."

Jinn later makes another appearance when Ruby summons her after failing to channel her Silver-Eyed powers. The former, acknowledges the young girl's clever strategy to summon her to buy more time, and allows her a free summon just this once. However, she warns her she will not allow her to summon her again without a question. 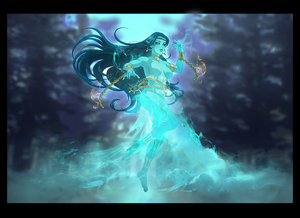 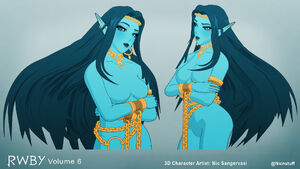 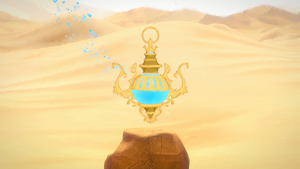 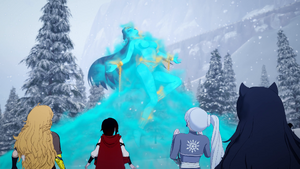 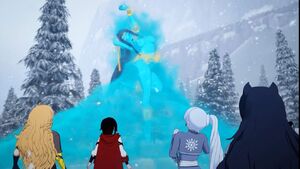 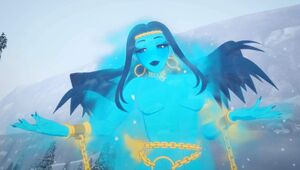 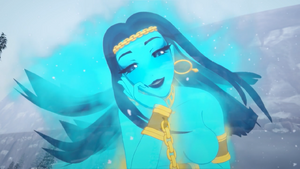 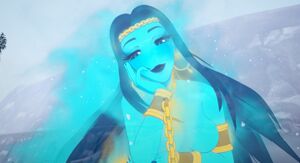 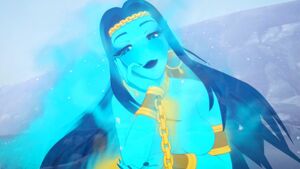 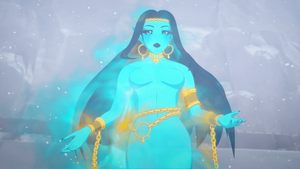 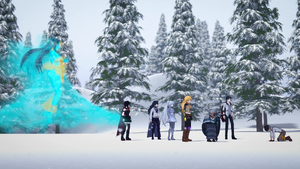 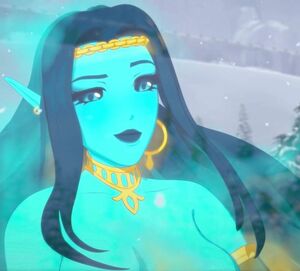 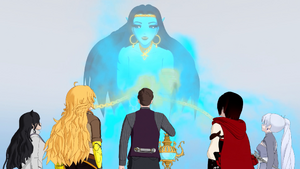 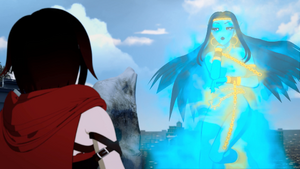 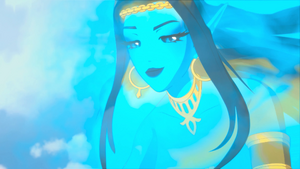 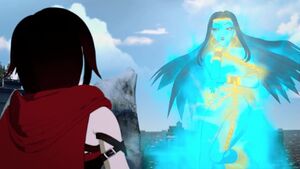 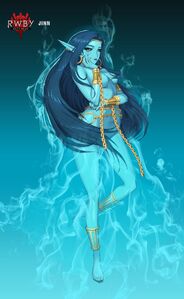 Add a photo to this gallery
Retrieved from "https://hero.fandom.com/wiki/Jinn_(RWBY)?oldid=1808758"
Community content is available under CC-BY-SA unless otherwise noted.