Jintsuu (神通 ?) is a character and one of the heroes from the Kantai Collection series who was implemented into the game on the 23rd of April, 2013.

She is the physical Fleet Girl counterpart to the Light Cruiser Princess.

Jintsuu was the second vessel completed in the three-ship Sendai-class light cruiser in the Imperial Japanese Navy, named after the Jinzū River in the Gifu and Toyama prefectures of central Japan. She was active in World War II in various campaigns including the Japanese invasion of the Philippines, the Battle of the Java Sea, and Battle of Midway . On July 13, 1943 in the Battle of Kolombangara, she was discovered during a night attack American ships and sunk in combat.

The Sendai-class wear a orange and white petaled serafuku with a black skirt and scarf. Cannons and a crane are attached to their elbow gloves. Each of them have medium-length brown hair and brown eyes.

Jintsuu herself has longer hair with hair intakes and a half updo. Thus, she has the most diverging looks of her class, resembling somewhat a certain flower girl.

For her second remodel, she wears an unsleeved and less adorned version of Naka's uniform with a white and black pleated skirt, baggy detached sleeves and thighhighs. Her fabled searchlight is attached to her left thigh and she now wears a green hachimaki/forehead protector tied to a bow. The bangs forming her hair intakes are shortened, now resembling somewhat more like a certain ninja. Her second remodeled form is often compared to samurai, in particular the Shinsengumi.

She is a quiet and reserved girl. She is also an extremely shy, she was one of the most inconspicuous ship girls until the reveal of her second remodel which also gave her the assertiveness to stand out and has an aversion to skin contact. 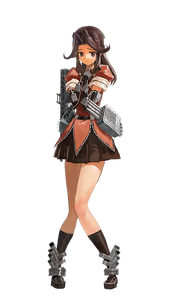 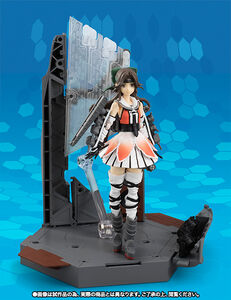 Retrieved from "https://hero.fandom.com/wiki/Jintsuu?oldid=1857346"
Community content is available under CC-BY-SA unless otherwise noted.