Checking out beautiful woman while they bathe.

Jiraiya, also known as Perverted Hermit or Pervy Sage, was one of the supporting characters in the Naruto universe. He was an legendary Sannin of Konohagakure, along with Tsunade and Orochimaru, who were trained by the Third Hokage. He was a powerful shinobi and the self-proclaimed super-pervert (although, at least in the manga, he meant it as a joke),and the writer of the popular adult fiction book series, called Icha Icha which Naruto refers it as the "naughty novel" and those are considered as young prohibited to read all of Jiraiya's novel books. He was also known as the Toad Sage (Gama Sennin), because of his signature toad summonings and his status as a sage, who was prophesied to be destined to teach the Child of the Prophecy who would either bring peace to the world, or destroy it entirely.

As a child, Jiraiya and his former team-mates Orochimaru and Tsunade, were students of the Third Hokage. Jiraiya's relation with his team practically mirrored that of the future Team 7, with Jiraiya being quite similar to Naruto. After leaving the Third's tutelage, he travelled the world. Jiraiya at some point discovered the residence of the toads, a species he proved to have a natural affinity for. In the anime this is shown to have occurred when he was still the Third's student; after seeing the Third perform the Summoning Technique, Jiraiya tried to use it himself. Since he did not have a contract, Jiraiya was reversed summoned to Mount Myōboku, where the Great Toad Sage made a prophecy concerning Jiraiya: that he would someday choose whether one of his students saved or destroyed the world. During his time with the toads, he trained in senjutsu.

During the Second Shinobi World War, Jiraiya and his former team-mates fought Hanzō, the leader of Amegakure. Hanzō was so impressed that they could survive in a fight with him, that he bestowed upon them the title of Konoha's "Legendary Three Ninja"( Densetsu no Sannin), and that they accept the title in exchange for letting them live. Once the battle was over, Jiraiya and his team-mates encountered three young orphans from Amegakure. While Orochimaru suggested they kill them to spare them the cruelty of the world, Jiraiya decided to look after them for a while and teach them ninjutsu. During the time he spent with them, Jiraiya grew close to the three children, and even wrote a book that was inspired by one of them, Nagato. Eventually, he left them so that they could pursue their own goals. Although news of their exploits reached him from time to time, he thought them to have died during an undisclosed incident. Once becoming a jōnin and capable of leading a squad, Jiraiya became the teacher of Minato Namikaze and two other unknown genin.

Jiraiya took particular interest in Minato, taking him as an apprentice, and amongst other things teaching him the Summoning Technique. At some point, he also told Minato about the prophecy the Great Toad Sage had given him, believing that Minato could be the Child of the Prophecy. Later, Jiraiya's first book, The Tale of the Utterly Gutsy Shinobi, failed to be a best-seller. Minato, now the Fourth Hokage, thought the book was excellent, and praised Jiraiya, saying that the protagonist resembled him greatly. It was then that Minato revealed that he and Kushina Uzumaki, who was pregnant at the time, wanted to raise their child to be a great shinobi, like the one in the book, and for that reason they decided to name him "Naruto", after the main character. Jiraiya jokingly pointed out that it would make him Naruto's godfather, and asked if they were sure that they would want that.

Minato replied that Jiraiya was a good example for them all and that he could not think of a finer shinobi than him. Years later, when Orochimaru betrayed Konoha and left the village, Jiraiya pursued him, trying to convince his friend to come back (similar to Naruto's efforts to bring Sasuke home). Orochimaru refused, and attacked Jiraiya. While he tried to find a reason for Orochimaru's defection, Jiraiya eventually realised that his friend wasn't coming back. Feeling that he was responsible for Orochimaru's escape, Jiraiya left Konoha so he could follow Orochimaru's movements, as well as those of "Akatsuki", an organization which Orochimaru had eventually joined. In doing so, Jiraiya was unable to fulfil the Third's wishes of him taking on the role of Hokage, feeling that tracking down Orochimaru was more important.

Jiraiya was generally light-hearted and gregarious, making jokes at his own expense and giving a mirthful laugh about it afterwards. In his interactions with others, he liked to pretend to be smug or selfish, upsetting them so that he could further rile them up with his humour. Even when entering combat he did not miss an opportunity to be flashy and over-the-top, striking kabuki poses and giving dramatic self-introductions; these intros were often interrupted in some way, and Jiraiya was quick to express his annoyance at whoever was responsible.

Although he left Konoha for many years, Jiraiya's loyalty to his village remained absolute. When Konoha found itself in need of a new Hokage after the Third Hokage's death, Jiraiya volunteered to look for Tsunade so that she could be the Fifth Hokage, after turning down the position himself. His reason for refusing the position was, among other things, that he felt unworthy to take the role, since he had failed to save either of the previous Hokage from dying, as well as him having to conduct more "research". After he found Tsunade, and began to suspect that she might be helping Orochimaru, he made it clear that he would kill her if she betrayed the village, a proof of his loyalty to Konoha. However, once it became clear that Tsunade was still loyal to Konoha, and later accepted the title of Hokage, Jiraiya served as her most trusted adviser, loyal confidant, and a spy into the dealings of Akatsuki and Konoha's enemies. Jiraiya also did not hesitate to fight Orochimaru or Pain despite his old close bond with them to stop them for good.

Jiraiya was a self-proclaimed super-pervert with no equal, and a frequent voyeur, going so far as to create the Transparent Escape Technique, to allow him to spy on naked women without being caught (doing "research" as he called it, even as a child). He never actually hid his perversion, and even seemed proud of it, as seen when he told the Third Hokage about it when he was still a child. Despite this, Jiraiya disliked being referred to as the Perverted Hermit ( Ero-sennin; English TV "Pervy Sage") by Naruto in front of others. Jiraiya's perversion had been used against him on occasions, as seen when Naruto got Jiraiya to start training him after a simple display of the Sexy Technique (though Naruto hit a roadblock when Jiraiya wanted him to use the technique around him when training). When two Akatsuki members later tried to distract Jiraiya, they used a hypnotised woman to catch his eye and keep him busy. While their effort initially succeeded, Jiraiya eventually saw through their plot, due solely to the fact that women did not typically express interest in him. His peeping habits had also caused him great injury on one occasion; when caught spying on Tsunade in his younger years, she proceeded to break both of his arms, six of his ribs, and ruptured a number of organs as punishment. As a result of such injuries, Jiraiya now retained a rather healthy fear towards his former team-mate, and usually attempted to suppress his perverted ways when in Tsunade's presence. Despite these perverted tendencies, Jiraiya was in love with Tsunade nonetheless and even as he died, he lamented the fact that he was never able to win her heart. Even though he was perverted, Jiraiya never actually engaged in sexual relationships with others, as he never had a child and would thus consider Minato as his child and Naruto as his grandson. He stated simply that a happy life with a woman was not his fate. Nor would he let his feelings for Tsunade cloud his judgment and resolutely stated that he wouldn't hesitate to kill Tsunade should she betray Konoha and help Orochimaru, which was enough that even Tsunade seemed to show some fear when he said it. Some time after leaving Konoha, Jiraiya became the author of a series of adult novels called Icha Icha. The novels were based on his personal experiences in love, that he retold in a comical way. In a filler episode of the anime, Naruto ghost-wrote one of Jiraiya's Icha Icha novels. The book was found to be very popular. This indicates that either Naruto is capable of writing on the same level as Jiraiya, or that Jiraiya's writing abilities were no better than those of a child. Tsunade seemed to suspect that the latter was true, as she noted that a report he wrote as a child, accompanied by crude crayon illustrations, was poorly written. The popularity of the Icha Icha series seemed to have paid off well, as Jiraiya's cheque book revealed that he was fairly wealthy. Despite his wealth, Jiraiya was not above taking Naruto's money and spending it on sake and women. Jiraiya frequently disappeared when Naruto attempted to make him pay.

Jiraiya also sympathized with Tsunade when Nawaki died and seemed to have been close to him as well, holding him at enough regard to make Tsunade not see Nawaki due to how mutilated his body was and defending Tsunade when Orochimaru bitterly blamed her for not being there to heal him. Also, despite Dan naturally being a rival and a far more successful one when it came to earning Tsunade's love, Jiraiya understood him and Nawaki considerably, as he also berated Tsunade for even considering to have them revived in an inhumane way as such a way would be a shame to their names, implying he bore him no ill will.

Jiraiya's bravado hid his deep-rooted sense of depreciation: he was deep down haunted and regretful over the many failures he had made: the death of his student Minato and his failure to save Orochimaru and the many deeds Orochimaru commited against Konoha, especially the death of his teacher deeply weighed on him and even though he was angry at and wanted Orochimaru to die, he still blamed himself for his inability to save his former comrade. The fact that the majority of his students proved to be evil added even more insult to injury and he lamented his failure to stop them as he was defeated and about to die at Pain's hands. Jiraiya even stated that he couldn't care if he died as long as he died in a way as glorious as the previous Hokage. However, in the end, Jiraiya's indomitable willpower and good traits eclipsed this, as he never succumbed to despair and remained a fundamentally good and well-meaning shinobi, treasuring those close to him, above all else Naruto, as he saw him as the only success he ever made and continuing to believe in peace even as he failed to find a way to overcome the cycle of hatred in the shinobi world. Even as he was about to die, he was able to force his heart to beat again to pass on the dying message that would defeat Nagato and play a hand in his student's redemption and accepted his death with honorable dignity and pride, believing his heroic death was just barely glorious but ultimately enough. 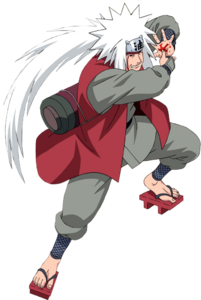 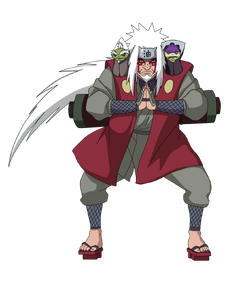 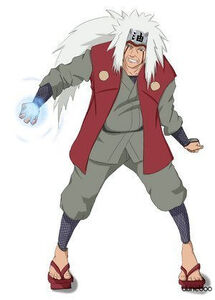 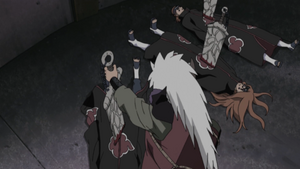 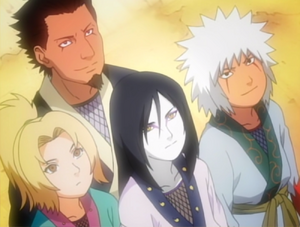 Jiraiya with Tsunade, Orochimaru and Hiruzen Sarutobi as part of team Hiruzen.