Helping others (adulthood)
Playing with toys (During her childhood)

As the player experiences the game, they will receive more information about the afterlife and discover the true meaning of the entity Aiden, the ghostly presence tethered to Jodie. It is revealed at the end of the game that Aiden is Jodie's twin brother, who was stillborn.

Jodie Holmes, a burdened and troubled woman, was born with a strange and unexplained gift, one which she often considers a curse. Her biological parents, Jonathan Nichols and Norah Gray, were both psychically gifted, and their powers were studied by the DPA. When Norah became pregnant, the DPA researchers were excited by the possibility of a child born to two psychics. It was discovered later in her pregnancy that Norah was carrying twins, a child and a little girl.

Her biological father, Jonathan Nichols, died before her birth, and her twin brother, Aiden, was stillborn.

Immediately after her birth, Jodie was removed from the delivery room, causing her biological mother, Norah Gray, to panic, Norah was given a neuro-acid shortly after, destroying her psychokinetic abilities and leaving her in a comatose state. (NOTE: Canon statements use the term coma, though her eyes are open and she is seen upright in a chair).

As a newborn, Jodie is adopted by Philip Holmes and his wife Susan (from whom she got her surname), a couple who had recently lost their infant son.

Jodie is never told of her actual parentage, leaving her to believe that Philip and Susan are her biological parents. While Susan is a warm and caring woman, Philip is distant and rather cold to her. Due to their assignment, Philip and Susan enroll Jodie in the on-base school. For the first several years of her life, Jodie is never allowed to leave the base. What sets Jodie apart from other children almost immediately is her strange connection to her "invisible friend", Aiden. 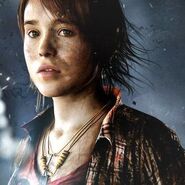 Jodie as a child, during "The Experiment".

Add a photo to this gallery
Retrieved from "https://hero.fandom.com/wiki/Jodie_Holmes?oldid=1865696"
Community content is available under CC-BY-SA unless otherwise noted.