Jodie Mason is a posthumous character who appears in the first Silent Hill videogame. She is the late wife of the protagonist Harry Mason and the adoptive mother of Heather Mason.

According to the novelization of the first game, Harry met Jodie at the beginning of his sophomore year of high school. He took the opportunity to ask her out after she broke up with her previous boyfriend. Jodie became Harry's priority as they fell in love. They were wed at a church soon afterward, and their nine years together are described as a "never-ending honeymoon".

When her husband was twenty-five, they found an abandoned baby on the side of the highway. With Harry's agreement, they adopted the baby, to which Jodie gave the name of Cheryl. It is revealed at a point in Silent Hill that Harry and his wife desired to have a child during their marriage, but were unable to conceive due to Jodie's illness.

Silent Hill suggests she died from her said disease. The game's manual confirms this.

The novel contradicts this by stating that while she was driving home from work, a car chase occurred in which a criminal crashed into her while in full speed, killing her.

In either case, her death left Harry in deep grief while Cheryl was too young to understand what had happened.

If the player gets the good ending, a radio transmission appears in which Jodie and her husband are heard finding Cheryl on the side of the highway.

In the introduction video, Jodie is seen finding Cheryl with Harry by her side. From her appearance, she has dark brown hair and dark eyes. She wears a long dress covered in a pink floral pattern, possibly cherry blossoms, and a shawl around her neck.

She is mentioned a few times throughout the game, first when Michael Kaufmann asks if she is with Harry, and Harry states that she died four years ago.

If the Good+ ending is achieved, she is replaced with Cybil Bennett in the intro. She and Harry are seen looking over Heather Mason, the reincarnation of Cheryl and Alessa Gillespie, as a baby. 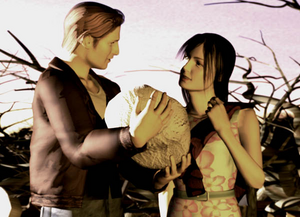 Jodie and Harry with baby Cheryl.
Add a photo to this gallery
Retrieved from "https://hero.fandom.com/wiki/Jodie_Mason?oldid=1666887"
Community content is available under CC-BY-SA unless otherwise noted.