Heroes Wiki
Register
Don't have an account?
Sign In
Advertisement
in: Article stubs, Male, Kids Next Door Heroes,
and 13 more

Joe Balooka is the supporting character of Codename: Kids Next Door. He was a hall monitor at Gallagher Elementary. He was Numbuh 2's partner before he became a KND operative.

At the first glance, Joe was the lackey of evil and certifiably insane Nurse Claiborne to infect other kids with Pinkeye in exchange for her delectable crumbles (which turned out to be made from Pinkeye crust). When Numbuh 2 began investigating the epidemic and suspected Joe, Joe was shot before he could reveal any information. Later, he rescued Numbuh 2 from Nurse Claiborne, at the cost of being shot again and badly injured in the process. After this incident, Joe was dismissed from the Hall Squad for his corrupt activities, and afterwards worked at a store owned by his father as a parking attendant. 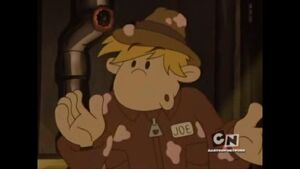