Joe Bucket is the tritagonist of the 1964 book Charlie and the Chocolate Factory by Roald Dahl and its film adaptations.

He is first seen "bedridden" with Grandma Josephine, Grandpa George and Grandma Georgina at Charlie's house. Grandpa Joe tells Charlie that he used to work for Willy Wonka at the factory until Wonka tells his workers that his factory is closed.

After the first four golden tickets were found by four bratty children named Augustus Gloop, Veruca Salt, Violet Beauregarde and Mike Teevee, Charlie has found the last Golden Ticket and Grandpa Joe, despite being bedridden for 20 years, magically decides to take him to the factory tour. During the tour, he and Charlie discover the chocolate room, a country-like edible room.

After Augustus Gloop falls into the chocolate river and is sent to the fudge room, he, Charlie, Wonka and the other children enter the candy experiment room as Violet becomes a giant blueberry. After Veruca becomes a bad nut and is thrown into the garbage chute, Mike Teevee is shrunk after being zapped into television.

Wonka tells Charlie that he has won and come to live with him to the factory, and invites his whole family to come live in the factory as well.

Grandpa Joe is the most hopeful that Charlie will find a Golden Ticket. When the boy does, the old man is so excited and happy that he gets out of bed to serve as Charlie's guardian for the factory tour. In fact, he gives up the tiny bit of money he's saved so Charlie can buy a Wonka Bar and — hopefully — find a Golden Ticket in the novel and most adaptations. In the 1971 version, Joe uses the money Charlie, having earned it on a paper route, had earmarked for the former's tobacco habit (which he's giving up anyway). In all, Grandpa Joe is a true friend who's willing to sacrifice what little money he's saved up to get Charlie a Wonka Bar in hopes of the boy finding a Golden Ticket. He also is determined, in both the 1971 and 2013 versions, to make sure Charlie gets everything he's been promised. Another sign of his inner goodness is in the sequel book, he and all members of Charlie's family ride with Charlie and Wonka in the Great Glass Elevator and assists the rescue of the Commuter Capsule from the Vermicious Knids. 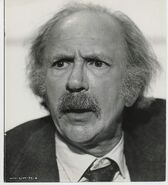 The late Jack Albertson as Grandpa Joe in the 1971 version.

Grandpa Joe and Grandma Josephine grieving over the loss of their grandson's father.

Grandpa Joe being told by Mrs. Bucket that she expects to set his feet on the floor if he wants to get of bed.

"Maybe if the floor wasn't so cold!"

Grandpa Joe telling Charlie they are having cabbage water for dinner.

Grandpa Joe amazed to see that Charlie has managed to buy a loaf of bread.

When Charlie offers him money so he can buy tobacco, Grandpa Joe tells his grandson he's decided to stop using tobacco.

However, when Charlie begs him to take the money, Grandpa Joe relents.