Master Chief Petty Officer John-117, also known as simply the Master Chief or Sierra-117, is the protagonist of the Halo franchise.

He is a Spartan-II commando of the UNSC Naval Special Warfare Command who became one of the most important UNSC heroes during the Human-Covenant war.

With over thirty years of active duty, he has become one of the most decorated war veterans in the United Nations Space Command, earning every known UNSC medal except the Prisoner of War Medallion. His goal is to save humanity from hostile alien races.

He was voiced by Steve Downes, David Wald in Halo Legends, and Alex Pccinelli in Halo 4: Forward Unto Dawn. He will be portrayed by Pablo Schreiber in Halo: The Series

John was an unknowing child who excelled at always being at the top. He never lost and this was one of the qualities that Dr. Halsey adhered for in the SPARTAN project. Even at a young age, he was exceptionally strong and fast compared to other children of his age group and fortunately, it made him stick out long enough for him to be noticed. When Dr. Halsey and Lieutenant Keyes first observed John in action on his home planet of Eridanus II in the small city of Elysium. He qualified beyond their expectations having extraordinary reflexes, physical proportions and and extremely agressive drive for success. He was chosen out of 150 possible candidates and was given one last task by Dr. Halsey to determine whether was suitable or not. He was asked to watch an old coin and choose which side it would land on. As it flew through the air, John snatched it before it even landed and chose correctly, the Eagle. Even at the young age of 6, John was referred to by Dr. Halsey of having amazing eye-sight.

Alongside 74 other children, John was conscripted and covertly kidnapped from his parents to initiate his SPARTAN training. In their absence, flash clones of the children were left behind to avoid any suspicion or cause any concern. John and the other candidates were taken to the planet Reach where Dr. Halsey informed them of the SPARTAN- II program they were to be initiated into and how they would become humanity's greatest protectors. The following morning, John awoke in his quarters and looked upon his new name: John-117.

Master Chief has returned from Requiem and regrouped with his SPARTAN Team, Blue Team. On a mission to Argent Moon to receive important data sill on the station. Once there, Chief receives a "vision" of Cortana and learns that she is on Meridian. After Chief and his team manage to destroy station to prevent the Covenant from claiming it, Chief takes his team off the grid to Meridian in search of Cortana. Once there, they travel under the planet's surface and locate teleporting pads. The team runs into another Spartan fireteam, Osiris, and learn that they are being hunted. Chief defeats Osiris' leader, Spartan Locke, and jump through the next portal. They arrive on the planet Genesis to find that Covenant forces are already there. Chief soon runs into the Warden Eternal, a Forerunner artificial intelligence assigned to defend the Forerunner Domain. Blue Team eventually fought the Warden. After defeating him, Cortana gives Chief instructions on how to find and free her. Chief and his team enter another gateway and are transported to the Domain, the first organics to enter since the ancient Forerunners.

Chief makes his way through the Domain and encounters the Warden Eternal again and after he defeats him, Cortana reveals that she intends on wiping life from the galaxy to start anew, while keeping Chief and Blue Team as her new champions. Chief is then frozen inside a Cryptum until Spartan Locke and his team can come and rescue. The Chief is then taken to Sanghelios and reunited with Dr. Catherine Halsey.

Master Chief/John-117 is a superhuman, especially with his MJOLNIR armor, and has been augmented in a number of ways designed to increase battlefield performance.

Master Chief famously appeared in the viral battle royale game, Fortnite, appearing in the game as a guest character in 2020. He is not a playable character, but rather an outfit that the player could buy from the digital shop using V-Bucks from December 11 to December 18, 2020. Memes have been created about this character regarding how ignorant little kids may be unaware that Master Chief is from a well-respected video game series, Halo, making fun of little kids by making skits of people saying that "the guy from Fortnite" was stolen by Halo Infinite, the upcoming 6th installment in the Halo franchise set to come out in 2021.

The Chief appeared in an anime series titled Halo Legends which was overseered by 343 Industries and (unusally) developed by multiple studios, meaning not every episode has the same animation. It delves into the Halo lore and then shows more about it than just Master Chief, such as his friend Frederic-104, as well as original stories of new characters and settings.

Master Chief makes a brief cameo appearance in the 2018 science fiction film Ready Player One, adapted from the best-selling novel of the same name. Multiple Spartans can briefly be seen fighting the IOI's Sixers with Halo 4 MA5D Assault Rifles, assisting the High-5 in their final fight.

Master Chief appears in the famous Adult Swim stop-motion animation series Robot Chicken, where he is parodied and made fun of. Comically, his personality is a complete opposite to his original personality, as Master Chief is shown as incompetent and distractable. Due to this, Cortana and Sergeant Johnson are not able to effectively cooperate with him, as shown when Chief has an uncomfortable conversation with Cortana instead of focusing on the battle, and forgets to bring his gun to the battlefield in a critical moment. Master Chief supposedly died from an Elite that only got him due to his inattentiveness during the short with Cortana, "Halo Dick", set in Halo 4.

Master Chief appeared as a playable character in the Nintendo Switch launch title Super Bomberman R, the first entry to the series in over 6 years. He doesn't officially appear in the game until it was ported onto the Xbox One in 2018, and Master Chief is only playable on that console. 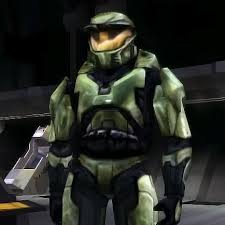 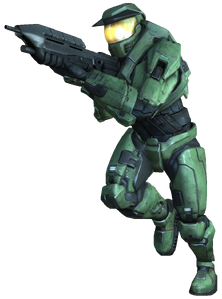 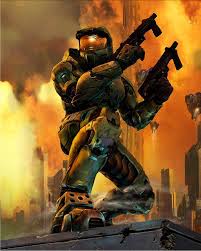 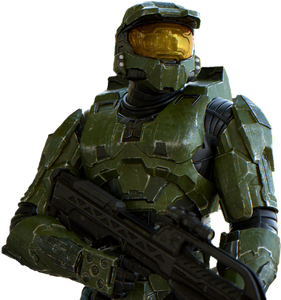 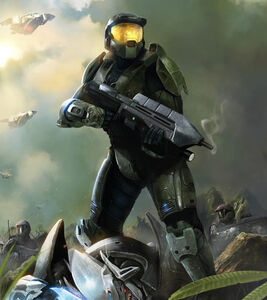 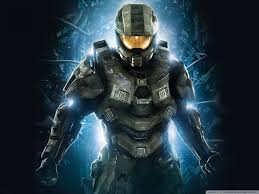 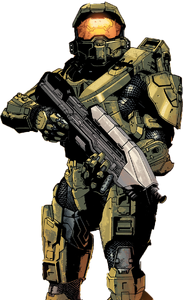 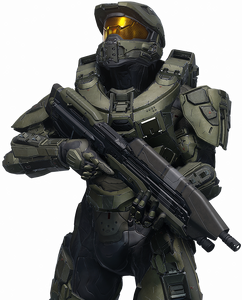 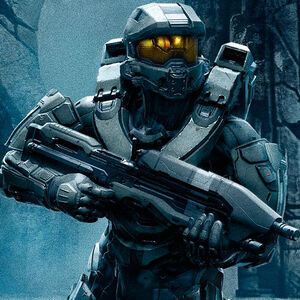 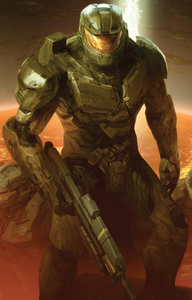 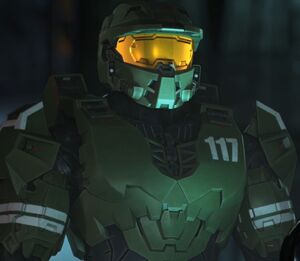 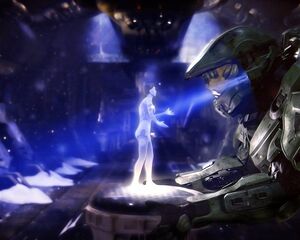 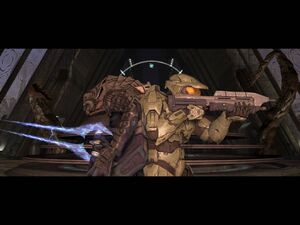 Master Chief and Cortana in Halo 4.