Be a good secret service agent and spending time with his daughter Emily.

Get the job as a secret service agent, impress her daughter Emily also reconnect with her and protect the President James Sawyer from the terrorists (all succeeded).

The Chosen One
John Cale is the main protagonist in 2013 film, White House Down. He is a father to Emily Cale and ex-husband to Melanie.

He is portrayed by Channing Tatum who also played Greg Jenko and Duke.

Cale was not a very smart student in school, but he earned a college degree later in life. He was sent to Afghanistan to fight the Taliban during the early 2000s, leaving his daughter, Emily behind. During the war he displayed heroism, and even saved a fellow soldier from a burning Humvee as a result of an IED explosion. He received the Silver Star for this. After he returned home, his wife, Melanie, and him got divorced and he discovered that his daughter, Emily, had taken an interest in politics and does not think of him as her hero anymore. This broke his heart but he understood why she was frustrated with him. Since this he tried desperately to make up to her for his absence during her childhood. One such attempt included a tour of the White House after an interview for the secret service. The interview doesn't go well at all and he is rejected, the reason being that he has potential but is too lazy to act on it. He can't break this to Emily, however, and they go on with the tour. However, the White House is taken over by a paramilitary group of mercenaries and Cale is the only one who can stop them and save the President, James Sawyer.

Cale locates and rescues Sawyer, and the two manage to reach out to command which tells Cale to get Sawyer out through underground tunnels. Cale and Sawyer find the tunnel gate rigged with an explosive and are forced to escape with a presidential limousine. After giving chase with Stenz on the White House lawn, Cale and Sawyer are flipped into the White House pool after Cale gets distracted by Killick holding Emily at gunpoint. A gunfight erupts which results in an explosion that leaves Sawyer and Cale presumed dead. Hammond is then sworn in as President.

When Cale and Sawyer reveal they are still alive, they learn Hammond has approved an aerial incursion by Delta Force to take back the White House. Knowing the mercenaries have Javelin surface-to-air missiles, Cale tries but fails to stop the mercenaries from shooting down the helicopters. Cale gets into a fight with Stenz and ends up dropping his White House passes for himself and Emily while escaping. Having already learned of Emily from the video, Stenz, knowing that she is Cale's daughter, takes her to Walker in the Oval Office.

When Cale and Sawyer reveal they are still alive, they learn Hammond has approved an aerial incursion by Delta Force to take back the White House. Knowing the mercenaries have Javelin surface-to-air missiles, Cale tries but fails to stop the mercenaries from shooting down the helicopters. Cale gets into a fight with Stenz and ends up dropping his White House passes for himself and Emily while escaping. Having already learned of Emily from the video, Stenz, knowing that she is Cale's daughter, takes her to Walker in the Oval Office.

Walker tells Cale over the White House intercom to surrender Sawyer or he will kill Emily. Sawyer ultimately surrenders himself to save Emily, knowing Cale could still save them if he was free.

Killick finds Cale and tries to kill him, but is ambushed by Donnie the White House tour guide, who bludgeons Killick to death with a clock. After freeing the hostages and entrusting Donnie to get them out safely, Cale kills Stenz with a grenade belt after a confrontation. Using updated launch codes received by an anonymous source, Walker targets various cities in Iran, but before he initiates the launch, Cale crashes into the office in a presidential escort vehicle and jumps through the sun roof, killing Walker with a minigun before he can press the launch button. Sawyer reveals himself to be alive and Finnerty calls them to reveal that the mercenaries were not called in by Walker and that there is another mastermind behind the attack. Cale realizes who it is and asks Sawyer for his help in exposing the traitor. When Finnerty arrives at the White House with Raphelson, Cale tells them Sawyer was killed. Raphelson then orders troops to be placed back into the Middle East, which would go against Sawyer's peace treaty. Cale reveals Raphelson had orchestrated the attack because of Raphelson's disagreement with Sawyer's treaty and proves it by having Finnerty call the call-back number on Walker's pager. Sawyer then reveals himself and has Raphelson taken into custody, treating Raphelson's taking of the Presidency as a coup d'état. Sawyer officially employs Cale into the Secret Service and takes him and Emily on an aerial tour of Washington, D.C. on his way to the hospital. 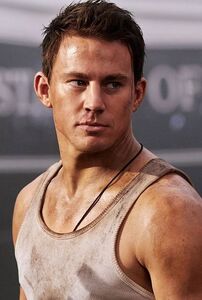 Add a photo to this gallery
Retrieved from "https://hero.fandom.com/wiki/John_Cale?oldid=2083622"
Community content is available under CC-BY-SA unless otherwise noted.