Big Good
John Egbert is a character in Andrew Hussie's Homestuck. John is a thirteen year old boy who's birthday is on April 13. He is the first kid to be revealed and one of the four kids (along with Rose Lalonde, Dave Strider,and Jade Harley).

John's hair is always up and he wears glasses. With his god tier he wears a blue hood. With his Prospit outfit he wears a yellow suit with a moon figure on it.

John first appears in act 1 trying to get a game called Sburb. Although in order to get it he had to fight his dad. Once he starts the game he expands his room so he can place a machine which created a mysterious apple, while a large meteor falls toward his house. He bites the apple, transporting him to the Medium.

John wakes up only to see everything around him has been destroyed. John also notices that his father is missing and some Imps stole him. The imps mess up John's room which angered John to kill them all. Soon bigger imps known as ogres started attacking John. John joins his friend Rose Lalonde game session and they both take down All the ogres. Before this happened Rose's Internet crashed making her unable to join John. John called Dave Strider for help but Dave just rapped nonstop. It is also revealed that John pranked Dave into drinking his pee

In this act John's Nanna, NannaSprite, helps John by getting rid of some ogres and imps. Nannasprite bakes some cookies for John as well. Whenever John seems to get weakened Nannasprite puts him to full health. John also tries to get presents for Jade Harley, Dave Strider, and Rose Lalonde since there birthdays were on the same day.

John meets a troll named Terezi who told John to enter a portal called a second gate. Terezi did not tell John that the second gate will have a strong enemy in it. So when John would go into the second gate he did not know what he was in for. Luckily though before he went into the second gate Dave Strider went back in time to make sure John didn't die. When Dave went back in time he told John not to listen to Terezi unless he wanted to be killed. John didn't listen to him and went into the second gate. Surprisingly it only led to him crashing into Roses house. Even though John made a loud enterance Rose did not wake up. John snuck into Roses computer and pretended to be Rose when texting to a troll named Kanaya Maryam, who had contacted Rose at the moment. John also meets two other trolls which were Karkat Vantas and Vriska Serket. John became good friends with Vriska and didn't know what to think about Karkat. While John was sleeping so was his dream self. Because his dream self didn't wake up he had no idea that he was underattack by Jack Noir.

In Act 5 Act 2 John accidentally created The Demon's third form AKA Bec Noir. John manages to get on his Quest bed before getting killed by Bec Noir. Because he died on his quest bed he revived as a God Tier. John wanders around a battlefield and finds a lone solider. John helps this solider out by getting into a car with him and using his wind powers to lift the car from the ground, taking the solider to a safer area. John then sees a dark storm and decides to see what it is causing it. He finds out that Rise was causing it and Rose told John that she knew where his dad was. John joined Rose and Rose lead John to his fathers dead corpse that was slain by Bec noir. When Rise and John start to fight Bec Noir, Bec Noir stabs John "killing him". John passed out from the stabbing long enough that Bec Noir went away after killing Rose. John wakes up and is asked on a date by Vriska. It took John to answer but when he did Vriska was killed by Terezi. John then reunites with Jade Harley. Jade seems to have reached God Tier as well. John watches as Jade breaks the fourth wall.

John thinks his pranks are awesome but he doesn't realize that his pranks sometimes go to far (like how he peed in a lemonade bottle and gave it to Dave). John is however strong and manages to beat down Caliborn.

John has realationship towards Poppop as Poppop is johns pre-scratched self. He also has relationship to Nanna as she is his grandma. 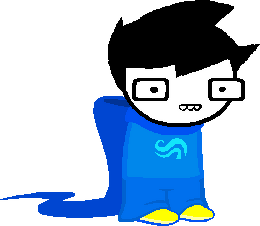 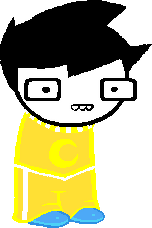