Fix the gravititional anomaly, even at the risk of his life. (suceeded)

Jonathan "John" Goodspeed was the husband of Sheryl Goodspeed, the father of Gary Goodspeed, and the posthumous overarching protagonist of the 2018 adult comedy Sci-Fi animated series Final Space.

He is voiced by Ron Perlman, known for interpreted Clarence "Clay" Morrow in Sons of Anarchy.

John was a tall man with a muscular build, brown combed back hair with gray temples, a square jawline, and a cleft chin. He wears an Infinity Guard captain uniform: a teal body suit with gray shoulder pads, gloves, and boots, along with a white triangular collar supporting the Infinity Guard insignia over the chest. He wears a gray belt, which supports a gun holster strapped over his right leg.

He was first seen in Gary's flashback, handing a little Gary a jar with a caterpillar inside named Mooncake. He was originally a member of the Infinity Guard. John and Gary shared a very close bond, and John went so far as to say there was nothing he would've liked more than to go on adventures with his son in space. Selected to investigate a gravitational anomaly, John left Gary with a little caterpillar he named "Mooncake" as a pet to keep the boy occupied until he got back. Before he left, he made Gary promise that one day he would find a crew and go on adventures, just as they'd talked about. Sadly, John and Gary would never see each other again, as John's ship exploded under unknown circumstances just after launch. John's death greatly effected Gary, making the young man desperate to block the memories out.

When Gary was sent back in time by the outcast Titan Bolo, he encountered his father moments before his vessel exploded. John was skeptical on Gary’s identity as his son until Gary repeated the last words he said before he left for his mission. As time was frozen for them thanks to the Titan’s power the two caught up and discussed the past and future. John’s mission as it turns out was to close a breach in space connecting to Final Space. His navigator ironically turned out to be no other than the Lord Commander or Jack, who he knew for twenty-nine years. When he learned from Gary that his friend Jack will rip his son’s arm off and cause the death of his son’s best friend he was skeptical. However he trusted his son and offered Gary the chance to beat the future tyrant up. The two bonded beating the temporally frozen alien to a pulp. Satisfied, John told Gary how to seal the breach in his future. The two worked together to prepare to manually launch a bomb that would seal the anomaly. However John willingly sacrificed himself, taking the bomb into the rift despite his son’s pleas. He informed Gary that a second bomb existed and it was located on Earth, in New York. 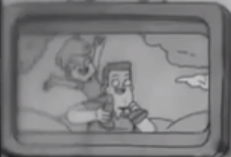 A photo of John with his son, Gary. 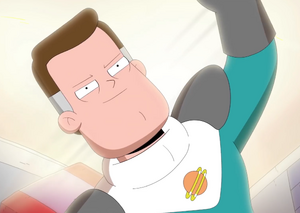