NOTE: This article is for the film series version of John Hammond where his portrayal was changed into a heroic character, while his portrayal in the novel is a villainous character.

Making sure everything is under his control.

Protect and rescue his grandchildren via Dr. Grant's aid (succeeded).

Get rich through his park and to protect its existence in any cost (failed).
Turn Isla Sorna into a wildlife preserve (succeeded).
Overthrow Peter Ludlow (succeeded, but with a heavy price).
Redeem himself and fix his past mistakes (partly succeeded).

In the films, he was portrayed by the late Sir Richard Attenborough.

All it is known about John Hammond's early life is that he attended university, possibly, but he developed a hatred of universities. John Hammond scoffed at academia and said that action was happening in laboratories not universities, so he recruited several famous intellectuals, including Robert Muldoon and other scientists, through this university/laboratory lecture.

In the 1993 movie based on the original novel, Hammond's personality was changed from a cold-hearted and eccentric CEO to a more caring and sympathetic grandfather, and unlike in the novel, Hammond survived the downfall of his park and redeemed himself by helping the survivors (including his grand-children) escaped Isla Nublar. His intention why he build Jurassic Park was similar however, though during his conversation with Ellie, he revealed that though he initially built the park to be rich, he also wanted anyone to see the dinosaurs in the world instead only seen in the movies or books, revealed that he also cared with his dinosaurs as much as with his family, visitors, and workers at the park. When the park suddenly fell into chaos, his conversation showed that he wanted to fix everything up, only for Ellie Sattler to bluntly tell him that he "never had control" and that the only thing that mattered now is the survival of the people they loved. Hammond was visibly struck by Ellie's words and spent the remainder of the film doing whatever he could to make sure that they all survived Jurassic Park. His determination to redeem himself with the disaster that roots from his dreams was apparent when he agreed with Dr. Grant that the park was a failure and should not be endorsed, though he was understandably depressed of the park's failure.

During his life in working on the park, he was also criticized by Ian that he couldn't/never meant to control the genetically-engineered dinosaur's life as "life always finds a way", a critique that he humbly accepted in the sequel after he found out that despite the heavy damage in facility that used for nursing dinosaurs due to the storm in Isla Sorna, nature had taken over the job and dinosaur ended up surviving without any need of mankind's help anymore.

He also made a major appearance in the 1997 film The Lost World: Jurassic Park, based on the novel's sequel, where he had lost control of his company InGen to his ruthless nephew Peter Ludlow, who intended to reinvigorate his uncle's past dream by opening a theme park filled with dinosaurs in San Diego. Fearing of any danger of Ludlow's plans as he already experienced the said danger himself in Isla Nublar, Hammond contacts Dr. Ian Malcolm to lead an expedition to Isla Sorna, where much of Hammond's work originated, in order to document the dinosaurs and their habitats to make the island a natural preserve. In one of his more ruthless, nearly villainous turns, he manipulated Malcolm into doing this by revealing that he had already sent Ian's fellow scientist and girlfriend Doctor Sarah Harding to Isla Sorna. Malcolm, knowing that Harding did not understand the danger she was in, made his opinion of this scheme plain to Hammond, including the now-iconic rebuttal to Hammond's assertion that they wouldn't be making the same old mistakes that time.

The mission succeeded, though Ludlow and much of his men fell victim to the carnivorous dinosaurs during the mission because he was unaware that some of Ian's friend's attempted to free dinosaurs from antagonistic humans has disastrous consequences. Ludlow also died from his own hubris, but they were deeply estranged by this point, and it was implied that Hammond briefly took back control of InGen to undo Ludlow's work.

John Hammond died shortly after the events of the second film. He was briefly mentioned in Jurassic Park III by Dr. Grant who stated how he still disagrees with his creations. His legacy still lives on in Jurassic World. Simon Masrani, CEO of Masrani Global Corporation & son of Hammond's personal friend Sanjay Masrani, acquired InGen in 1995. He later opened a now fully functioning park in 2005 on Isla Nublar: Jurassic World. Two decades after the events of the first film, Hammond's dream had finally come true in a now fully functional dinosaur park. The island's cloning facility had been named in honor of him, as well as a statue erected in the lab's entrance in a form of remembrance. But unfortunately, the history repeated itself once it was revealed that Vic Hoskins and Dr. Wu masterminded the Indominus rex's creation to be use in wars, where both Hoskins and the hybrid monster caused damages that surpassed that of what Nedry done, and eventually it also caused Hoskins' own death where the situation worsens more than he could used as his advantages, though Wu was able to escape with documents and samples of dinosaurs' DNA including the I. rex's.

It was revealed in Jurassic World: Fallen Kingdom that he was partners with Benjamin Lockwood to make the technology to clone the dinosaurs. However, they broke off their partnership when Hammond found out about Lockwood's plan to do human cloning. There is also a painting of him in Lockwood's manor.

This portrayal of Hammond is more sympathetic, noble and benevolent than his literature counterpart in many ways. First of all, Hammond is a genuinely loving grandfather for Tim and Lex more focused on create a sense of wonder for the world and wished that his park to be enjoyed by many people in the world than making profit of it, which led him to reintroduced extinct dinosaurs so everyone can see those creatures in front of their eyes aside merely recognized them from books, internet and TV.

He also had more friendly relationships with other people in the park, and more accepting to Malcolm's chaos theory regarding park's future and fact that men cannot truly under control over nature in spite of skeptical on it at first, and willing to take responsibility over his actions where he prioritized to save everyone in the end after seeing his park comes into chaos and beyond saving. It's also appeared that he also developed soft spot for his cloned dinosaurs that drove him to take extreme measures to preserve Isla Sorna without human interference.

Even so, he still have many flaws that more that often made him criticized by others that viewed him as somewhere between likable and unlikable person. When Nedry instigated the chaos on the park by shutting down security system and indirectly unleashed dinosaurs in the process, Hammond tried his best to undo the damage done on the park not only because it will ruin his dream, but also threatened lives of dinosaur and everyone in it until Ellie calling him out by telling him that the park has beyond the hope of saving and what matter now is saving his loved ones, which made him realized that he had to sacrificed his dreams for sake of greater good. Also, in his attempt to ensure that Isla Sorna become natural preserve for dinosaurs, he resort to manipulate Malcolm to aid him in saving Isla Sorna through his girlfriend Sarah without revealing full extent of danger she was in, resulted Malcolm criticized him for it.

His clearly good intentions and redemption makes him a better person than Ludlow, who wanted to bring dangerous dinosaurs to San Diego, but his methods were very extreme and not a perfect success as Ludlow and many of his hired hunters killed by dinosaurs and their short-lived success resulted Buck the T-Rex went on rampage on San Diego. Not only that, Dr. Grant stated that instead of fulfilling his dream to reintroduced the dinosaurs to modern world, Hammond created horrible monsters when reflected on Isla Nublar incident in 1993. Indeed, while he had better redeeming qualities than his book counterpart, his naivety more than often made him not account human error and unpredictability of wild animals.

A portrait of Hammond at Lockwood Manor in Jurassic World: Fallen Kingdom. 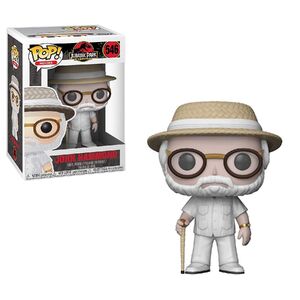