John Herbert is an elderly pedophile who lives on Spooner Street with his old, crippled dog, Jesse. He has a high-pitched, very soft, effeminate voice and with a slight whistle lisp. He is often seen wearing a light blue robe and slippers and uses a zimmer-frame walker to get around. He is a retired United States Army veteran. He becomes fixated on Chris in "To Love and Die in Dixie" when Chris took up a paper route and developed an unhealthy obsession with him. When the family returned from the South, he left 113 messages asking what had happened to the paper boy. Herbert frequently seems to make inappropriate, sexually-tinged comments to teenage boys. It is revealed later on that he is the eldest member of the Skull and Bones secret society. John is shown to be Roman Catholic and goes to the same church as the Griffins in "Boys Do Cry". Despite being a hero, he can also be an antagonist at times. 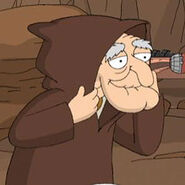 Add a photo to this gallery
Retrieved from "https://hero.fandom.com/wiki/John_Herbert?oldid=1805316"
Community content is available under CC-BY-SA unless otherwise noted.