Spending time with kids at the kindergarten.

Defeat Cullen and Eleanor Crisp also defend his former wife and son from them (all succeeded).

John Kimble is the main protagonist of the 1990 movie, Kindergarten Cop.

He is portrayed by Arnold Schwarzenegger, who also portrayed Ray Owens in the 2012 movie The Last Stand, Terminator in Terminator 2: Judgement Day, and Conan in Conan the Barbarian.

After years of pursuing drug dealer Cullen Crisp, Los Angeles Police Detective John Kimble has him on a murder charge after Crisp shot and killed an informant who has given him information regarding the whereabouts of his ex-wife, Rachel Myatt Crisp, and his son Cullen Jr. However, the informant's girlfriend is unwilling to testify in court.

Kimble, accompanied by detective and former teacher Phoebe O'Hara (Pamela Reed), go undercover in Astoria, Oregon, to find Crisp's ex-wife. It is believed that Rachel stole millions of dollars from Crisp before fleeing. The detectives are going to offer her a deal to testify against Cullen in exchange for immunity. O'Hara is to act as the substitute teacher in the son's kindergarten class at Astoria Elementary School. Kimble will discover the identity of the mother.

Unfortunately, O'Hara, who is hypoglycemic, gets a terrible case of the stomach flu and falls ill at the last moment so Kimble takes the teacher's job. The suspicious school principal, Miss Schlowski (Linda Hunt), is convinced he will not last long before quitting. Kimble adapts progressively to his new status even though he has no formal teaching experience. Using his pet ferret as a class mascot, his police training as a model for structure of the classes, and positive reinforcement, he becomes a much-admired and cherished figure to the children. In turn, Kimble begins to like his cover job and his young charges. He also deals with a case of child abuse. Miss Schlowski witnesses his actions, the principal assures him that even though she didn't agree with his methods, she can see that he is a good teacher.

Kimble becomes fond of Dominic's mother Joyce Palmieri (Penelope Ann Miller), who also works at the school. Joyce, like many other of the students' mothers, is on terms of estrangement from her husband, so that she will not speak of him. This excites the suspicions of Kimble. In a series of conversations with the gradually more trusting Joyce, Kimble slowly deduces that she has to be Rachel Crisp and that Dominic is Crisp's son.

Meanwhile, back in California the murder witness dies after using spiked cocaine provided by Eleanor Crisp (Carroll Baker). The case is over because the prosecution has no further evidence. Crisp is freed from prison and immediately heads to Astoria.

Crisp and his mother arrive in the town and immediately begin looking for the child, after which Crisp starts a fire in the school in order to get the boy. Upon being witnessed, he takes his own son hostage but Kimble manages to kill him before he can hurt Dominic. Crisp's mother then discovers her dead son but before she can shoot Kimble, O'Hara arrives and knocks her unconscious with a baseball bat.

Eleanor is arrested, while the unconscious Kimble (much to the sadness of the children) is hospitalized. During Kimble's recovery, O'Hara and her chef fiancée announce their marriage, inviting him to it. After Kimble recovers, he visits the school, and Joyce kisses him in front of all the kids. 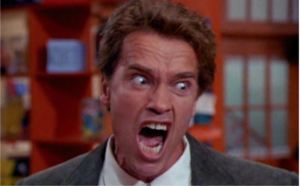