Adventurer
One of Ratcliffe's soldiers (formerly)

John Smith is the deuteragonist of Disney's 33rd full-length animated feature film Pocahontas, and a supporting character in its 1998 sequel Pocahontas II: Journey to the World, due to having a few scenes of screen time.

In the first film, he was voiced by Mel Gibson, who also played Rocky Rhodes in Chicken Run, Martin Riggs in the Lethal Weapon franchise, Max Rockatansky in the Mad Max trilogy, Thomas Craven in Edge of Darkness, William Wallace in Braveheart and Graham Hess in Signs.

John Smith is a 26-year-old explorer who is shown already be a legend at when he first appears, as Thomas mentions that there are "amazing stories about him." He is well known for his exploits as an explorer, not to mention his success at fighting savages. At the beginning of the film, he initially assumes that the voyage to the New World will be the same as the other voyages he has taken. By the end of the film, though, many of his views about the natives have changed.

At the beginning of the film, John is shown to have some prejudiced views regarding Native Americans, as he believes them to be savages. Despite these views, he is regarded for his courage and heroism. An encounter with Pocahontas changes his opinions, and he comes to believe that the natives can help his men. He is shown to be selfless, as he is willing to take the blame for Thomas, when Thomas kills Kocoum.

John Smith in Young Pocahontas is portrayed as a scraggly clumsy 16-year-old redheaded teenager, but he still has as much courage as in the Disney film. He's not afraid to care for Pocahontas and tells off his assistant when he tries to shoot anyone.

Smith plays a smaller role in the sequel. Instead, John Rolfe takes over as the deuteragonist. Smith is assumed to have pushed off a roof to his death by the old foe Ratcliffe, so Pocahontas grieves for him and then meets Rolfe in Jamestown,  Much later, Smith appears to have survived the deadly river. He then realizes that Rolfe is in love with Pocahontas. After getting rid of Ratcliffe, Smith invites Pocahontas to travel the world with him.  Pocahontas refuses, citing that they now have their own paths to follow. When Smith realizes this, he decides to let her go, even if it meant that they would never be together again, but wishes her happiness in the future, and she wishes him the same. 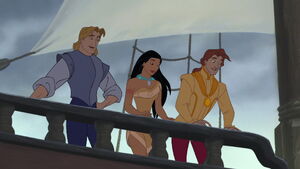 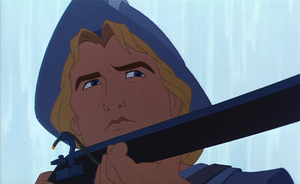 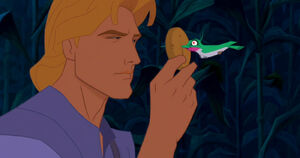 Retrieved from "https://hero.fandom.com/wiki/John_Smith?oldid=2178879"
Community content is available under CC-BY-SA unless otherwise noted.