John Tanner (b. October, 1973) was a police officer and a main protagonist from the Driver series. In Driv3r, he was voiced by Michael Madsen.

Tanner was a retired race car driver & he was in the Miami Police Department after finishing his conversation from the police in New York and asking him to investigate the gangsters while talking to the police chief and tells Tanner to do some driving training in order to become a fast driver to be fit for the job. Later in the parking lot Tanner was driving a purple Buick GSX and completed his first training and move on to the next assignment. In Miami Tanner went undercover by robbing banks with the mobsters, heisting cars & assassinating mobsters.

Tanner chases Jesse after Rufus was been shot Tanner captures Jesse and interrogates her that she was working with a Italian mafia named Castaidi who was in San Francisco. In San Francisco Tanner was working with the Mojo at the Casino and framing his rival named Slater with his own car during the car chase. In Los Angeles Tanner was now working with Castaldi by stealing guns to the warehouse & assassinating a FBI agent named Bill Maddox and saves Castaldi's men named Granger.

Tanner was back in New York Tanner was driving the stolen Police car to pretend to get the gangsters out from the bank they robbed and complete his own mission. Tanner was being disgraced from the police that Tanner was working with the Castaldi's work now Tanner must weaken Granger and find false photo crimes before taking on Castaldi. In the final job Tanner must drive with the president to safety while the police are going to apprehend Tanner when Tanner walks away from being a disgrace to the police department.

Tanner is an undercover officer back in—you guessed it—San Francisco with Tobias Jones, now driving a yellow 1970 Dodge Challenger R/T. While they are chasing Charles Jericho in the beginning of the story, Jericho rams Tanner out of the alley in a stolen police S.W.A.T. van and onto the road where the car gets t-bone rammed by a tractor trailer, putting Tanner into a coma.

In his coma, Tanner takes over people's bodies, causing him to drive their cars, which can be used in mission events around San Francisco. Jericho does make a few appearances in Tanner's coma. Tanner and Jones chase Jericho and ram his car. Tanner is about to cuff Jericho but it turns out it was just a vision and that it's just the other person who was actually driving the car. When Tanner shifts into Leila's driver, they pursue Tanner's car. She realises that Tanner is in the body and Jericho then shifts into Tanner's real body and rampages, causing Tanner to take Jones. Jericho then shifts back to his real body causing Tanner and Jones to escape the police. Tanner sees Jericho driving in a alleyway and follows him. Tanner escapes a gang of Jericho's into the alleyway where he was in a coma. Jericho rams them and they begin to race through the alleyway. Tanner realises that this is the only way to wake him up, so he stops the car and Jericho rams Tanner into a truck. Tanner falls back into his coma and begins to chase Jericho. Tanner defeats Jericho and wakes up.

Discovering that the bomb is a cover for a prison breakout, Tanner and asks Jones to steal pants and a car, but Jones has to tell Taner that his car was wrecked in the earlier event, and he "would have to steal his own pants." He is forced to drive Jones' 2010 Chevrolet Camaro SS to catch up with Jericho. Tanner and Jericho meet up in the depot warehouse at the Hunter's Point, with Jericho driving a Dodge RAM SRT-10. The two drive to each other before Jones t-bone rams Jericho in a Cadillac Escalade, while telling Tanner whose car he was driving. Jericho was apparently sent into a coma on the impact. 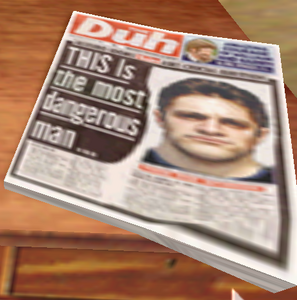 This article contains content derived from the "John Tanner" article on the Driver Wiki, licensed under CC-BY-SA.