Playing with his dog.

Hunt down and kill Iosef Tarasov in revenge for stealing his car and killing his dog (succeeded).

He is portrayed by Keanu Reeves, who also played Neo in The Matrix series, as well as Ted Logan in the Bill & Ted series, Jack Traven in Speed, Johnny Mnemonic in the titular film, Jonathan Harker in Bram Stoker's Dracula, Kevin Lomax in The Devil's Advocate, John Constantine in the titular 2004 film, Johnny Utah in Point Break, and voiced Johnny Silverhand in Cyberpunk 2077.

John Wick was born under the name Jardani Jovanovich, and was a Ruska Roma orphan from Belarus before being taken in by the Director. The Director brought him to the United States, and under her tutelage, Jardani developed martial art skills and basic training. At some point, Jardani adopted the name "Jonathan "John" Wick", and left the Ruska Roma for undisclosed reasons. In the comics, John was a thief in an impoverished Mexican village, who was almost killed by a group of gunmen led by a woman named Calamity, due to John having stole from them.

Wick served in the United States Marine Corps, as evidenced by his tattoos. It was in the Marine Corps, he met Marcus. Though it appears that he was part of the military, it hasn't been confirmed.

After leaving the Marine Corps, John put his skills to use as a professional hitman, joining the Continental, a hotel catering exclusively to criminals. Gaining a reputation for his efficiency, making him highly respected and feared within the criminal underworld.

At some point he began a business relationship with Russian mobster Viggo Tarasov. Viggo valued Wick as an associate for his skill, witnessing him kill three men with a single pencil.

Wick met a woman named Helen, whom he fell deeply in love with, seeking to leave his life as a criminal to be with her. He asked Viggo's permission to leave, Viggo agreed to let Wick leave, on the condition he complete "an impossible task", killing all of his rivals.

Needing assistance, Wick sought the help of Santino D'Antonio, in exchange for making a blood oath with him. Upon completing the task, Wick was freed from his service to Viggo, and retired from his life of crime.

Santino D'Antonio arrives at the John Wick's house asking him to pay his debt. When he refuses, Santino destroys his house. Afterwards John goes to the Continental Hotel where he is confronted by Winston who tells John to fulfill his debt, otherwise his life is forfeit. John then confronts Santino who tasks him to kill his sister Gianna D'Antonio. Reluctantly the Norman accepts and completes his mission after Gianna orders his subordinate Cassian to he left alone.

Once the mission is complete, Santino orders his men to kill John, who manages to survive the attack from both Santino's men and Cassian, when he together with John Wick crashes at Continental. In the bar, John apologizes for killing Gianna, while Cassian vows revenge. Later Santino tries to make peace with John, but he is ignored and places a 7.000.000$ bounty in his head.

A lot of hitmen attempted to kill John, including Cassian. But John kills them all, except Cassian who is left alive for professional respect. John Wick arrives at the Bowery King where his wounds are treated. John convinces the Bowery King to help him kill Santino, who provides him a gun with only seven bullets, and information about Santino's location. John manages to kill most of Santino's henchmen and leaves Ares badly injured, while Santino escapes at Continental Hotel.

Santino demands Winston to revoke John Wick's membership, but he decided and tells him that Continental is his kingdom and John hasn't broken any rules yet. In the same time, Winston tells Santino that he has privileges in the Continental. However, John Wick arrives and kills Santino while he is rating, despite Winston's warnings. The next day, Winston tells John that the bounty has been doubled and placed international. He also tells him that he is excomunicado, but gives John Wick one hour head start and provides him with a Marker for future use. John then runs while he is suspicious about the possible hitmen that surround him.

Presumably after the events of the first movie, Wick saves Chains (a comrade from the army) from the Swedish police. Afterwards, he is hired by Bain and joins the Payday gang. Some time in early 2017, Wick contacts the Payday Gang and asks them to help rescue Charon in Brooklyn.

Fighting off Charon's captors and the police force, Wick and the gang successfully get Charon escorted to safety. Out of gratitude, the Continential lobbyist repays them by offering intel on Bob McKendrick hosting a party about his re-election on a yacht, which would allow the Payday Gang to "repay" the politician by stealing all the money from McKendrick's foreign bank accounts and ultimately prevent him ever being re-elected.

John Wick, now internationally a marked man, is on the run. Before his excommunicado status is initiated, Wick travels to the New York Public Library and gets a marker medallion and a crucifix. There, he gets attacked and defends himself from an assassin who tries to kill Wick early. Wick visits a doctor to treat his injuries, but his 1 hour head start is finished and his status as excommunicado is initiated, just before the doctor can finish. Wick treats his injuries on his own and leaves. On the way, he's attacked by a gang but manages to defeat them all.

John visits The Director, the head of the Ruska Roma, and uses the crucifix to ask her help in aiding Wick a safe passage to Casablanca. Aware that aiding Wick will be a violation to her peace treaty with the High Table, the Director reluctantly agrees, knowing that John is a former protégé.

In Casablanca, John meets Sofia, a former close friend, and asks her help in locating the Elder, the mysterious head of the High Table, whom Wick can receive penance from, as well as removal of his excommunicado status. Sofia takes John to Berrada, her former boss, who tells John he may find the Elder by wandering through the desert until he cannot walk any longer. In exchange, Berrada asks for one of Sofia's dog. Sofia refuses, and Berrada shoots the dog, which is saved by a bulletproof vest. In retaliation, Sofia tried to kill Berrada, but John prevents her from doing so. Sofia then wounds Berrada and both her and Wick fight their way out.

Sofia takes Wick to the desert and leaves him there. After an amount of time wandering in the desert, John collapses and is found by the Elder's men. They take him to the Elder, where he asks John why he wants to live. John replies that he lives to earn the memory of the love he had with his wife. The Elder agrees to forgive him and revokes his excommunicado status, on the condition that he; assassinates his friend Winston and continue working for the High Table until his death. John agrees, and to show his commitment, he cuts off his ring finger and offers his wedding ring to the Elder.

John travels back to New York City. There, he is ambushed by Japanese assassins, lead by Zero and hired by the Adjudicator, an enforcer agent of the High Table. John survives the encounter and heads to the Continental for protection. John meets Winston, who earlier was informed by the Adjudicator to step down as general manager of the Continental as punishment for aiding John Wick by delaying his excommunicado status by one hour.

The Adjudicator arrives at the Continental. With John refusing to kill Winston, and Winston refusing to step down as general manager, the Adjudicator declares the Continental as "deconsecrated", which permits killing in the hotel. With the help from the hotel concierge Charon, John is able hold off against the High Table forces and ultimately defeat them, before being confronted by Zero's gang again. Wick fights them and eventually defeats them by mortally wounding Zero, but sparing his two students.

The Adjudicator contacts Winston to negotiate, ultimately retaining his position as general manager as well as gaining a fealty to the High Table due to his rebellion being seen as a "show of strength". However, when she asks what they're going to do with John Wick, Winston draws his pistol and shoots at John several times. John's ballistic coat manages to protect him, but the force pushed him off the building and he falls down to the streets, hitting several structures on the way.

As the Continental hotel is restored and cleaned up, the Adjudicator reveals to Winston that John is missing, and that he'll be a serious problem for them. Winston smiles, knowing what really happened.

A seriously injured John is taken to the Bowery King, who earlier got heavily scarred by Zero on the Adjudicator's order as punishment for aiding John. When the Bowery King expresses his anger at the High Table and asks John if he is pissed off, John replies "Yeah". 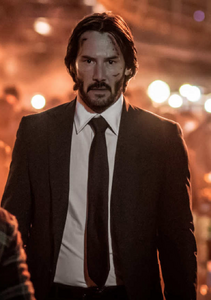 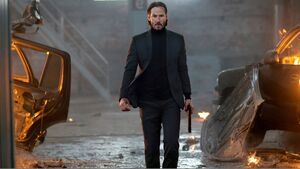 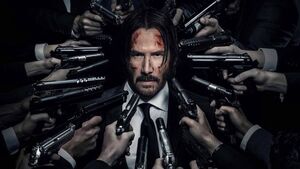 John Wick in the second film. 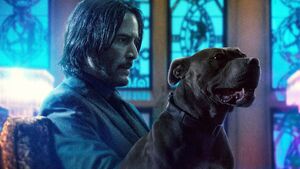 John Wick in the third film. 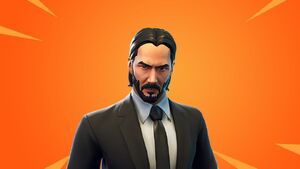 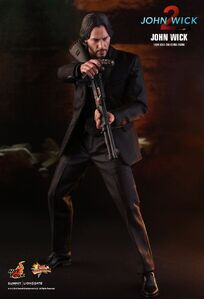 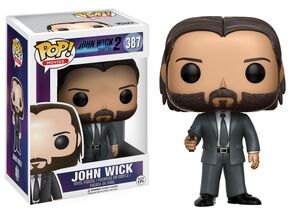 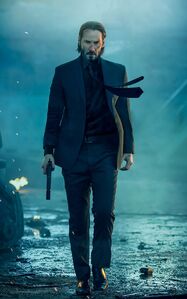 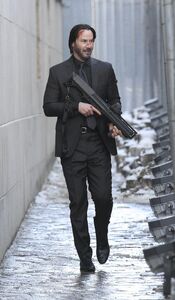 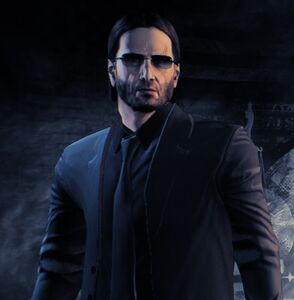 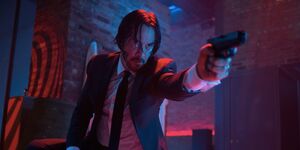