Johnny 5 (originally called "S-A-I-N-T Prototype Number 5") is the main protagonist of the 1986 film Short Circuit, its 1988 sequel Short Circuit 2 and a TV special called Hot Cars, Cold Facts. He is a former military robot whoose life is suddenly changed forever, when he was struck by a bolt of lightning, which caused him to become sentient and self-aware.

He is both puppeteered and voiced by Tim Blaney.

Johnny 5 is very curious, friendly and inquisitive with an almost insatiable thirst for “input” of just about any kind, but he is especially fond of books and television. While he started life as a military prototype he has a great respect for life and refuses to use his capabilities to harm others, even when they have no such compunctions towards him. He is very intelligent and inventive with an encyclopedic knowledge, but can be quite naive and child-like at times and can be too eager to trust people that he shouldn’t. His innocent nature has been taken advantage of on several occasions.

He has a fondness for old movies and comedy shows, from which he quotes extensively. Favorites include Jackie Gleason, The Three Stooges, old gangster movies, Tarzan movies and assorted television commercials. He does occasionally quote from sources with more gravitas too, including William Shakespeare, Francis Bacon and various philosophical texts. His favorite books are Mary Shelley’s Frankenstein and Carlo Collodi’s Pinocchio, probably because he feels empathy for the protagonists of those books. He finds humans to be bemusing and is sometimes frustrated by their behaviour and their failure to recognize him as a sentient life form, but seems to like them on the whole and has several close friendships with humans. His closest friendships are his creators Ben Jabituya, Newton Crosby, and human companion Stephanie Speck. 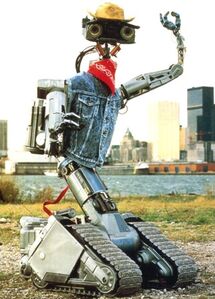 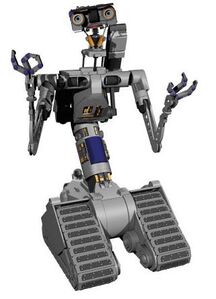 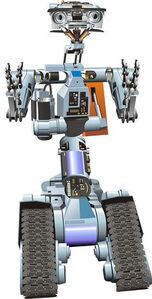 Johnny 5 S-A-I-N-T In Short Circuit 2
Add a photo to this gallery
Retrieved from "https://hero.fandom.com/wiki/Johnny_5?oldid=1751488"
Community content is available under CC-BY-SA unless otherwise noted.