Johnny English is the titular protagonist of the Johnny English film trilogy. He is a MI7 Intelligence agent, who is a combination-parody of James Bond, Austin Powers, and Mr. Bean.

Johnny English is an inept MI7 agent with dreams of being their most trusted employee. After Agent One dies in a submarine accident (courtesy of English making a mistake on checking the submarine hatch code), the remaining agents are assassinated via a bombing at Agent One’s funeral (again courtesy of English's incompetence at security), leaving English as the lone survivor. English is assigned to follow a plot to steal the Crown Jewels, which are on display at the Tower of London.

At the display, English is head of security, and meets the mysterious Lorna Campbell. The power is cut, and the jewels are stolen. During the chaos, English knocks out Col Sir Anthony Chevenix, Head of Royal Security in the process and pretends to fight the assailant (in reality fighting himself).

He later makes up a false description of the assailant to Pegasus. English and his assistant Bough find the jewels were removed via a hole dug beneath their display case. The two follow a tunnel, confronting the two thieves Dieter Klein and Klaus Vendetta. The two escape in a hearse, with English trying to pursue them, but he mistakes another hearse for the escaped vehicle, gatecrashing a funeral until Bough comes to his aid by pretending he is from the Lunatic Response Unit and that English is a patient named Gunther who wasn't supposed to be released until 2028 but was accidentally released due to "a most monumental cock-up".

English connects the thieves to Pascal Sauvage, a French prison entrepreneur who helped restore the Crown Jewels. Pegasus, head of MI7, finds the claims of his involvement absurd and warns English not to involve Sauvage. In the car park, English and Bough are attacked by Vendetta, but are unharmed beyond Bough getting a nose bleed (courtesy of English mistaking him for Vendetta and covering up for himself by saying that there could have been other thieves and adamantly insisting that Bough drop the issue and move on).

English again encounters Lorna Campbell in a sushi restaurant as he recognized her motorcycle. During their meeting English is suspicious of her since he has seen her at two of their crime scenes and her records cannot be found on any government computer. English and Bough decide to break into Sauvage’s headquarters via parachutes, but English lands on the other twin tower containing the City Hospital by mistake taking hospital employees hostage until he sees the "SAUVAGE" sign from the building with Bough inside.

He then covers for himself by telling the employees that the holdup was just a test of their emergency response systems while telling Bough that he merely did a precautionary sweep of the immediate environment. Going to the correct building, the two learn Sauvage, who is a descendant of Bonnie Prince Charlie, plans on making himself king, using an impostor to impersonate the Archbishop of Canterbury. Lorna arrives, revealed to be an Interpol agent tracking Sauvage. With evidence of Sauvage’s involvement, English crashes a reception hosted by Sauvage but he is suspended from work by Pegasus for breaking into Sauvage's office, assaulting his staff and insulting the foreign secretary.

With English knowing their plans, Sauvage scraps the fake Archbishop and instead sends his minions to force Queen Elizabeth II to abdicate by threatening her corgis, causing the entire line of succession to be swept clean for Sauvage to become king. Lorna, now in charge of the assignment by Pegasus, visits the depressed English and convinces him to travel with her to Sauvage’s French Château to investigate.

Eavesdropping on Sauvage’s meeting with renowned criminals, English and Lorna learn Sauvage plans to turn the United Kingdom into the world’s biggest prison when he becomes king. English and Lorna are exposed when the former accidentally activates a microphone, and they are taken prisoners. English tries to steal the DVD of Sauvage’s plan, but accidentally drops it onto a tray of identical discs and takes the wrong one without looking. Bough rescues the two and they race to stop Sauvage’s coronation.

English crashes the coronation and discovers the Archbishop is the genuine article. Undeterred, English orders Bough to play the DVD, only to find it is camera footage of himself dancing in his bathroom in his underclothes to “Does Your Mother Know” by ABBA, Sauvage having bugged English’s flat beforehand, much to Pegasus' disgust. English sneaks away but swings in on a wire to steal St. Edward’s Crown from Sauvage. Sauvage angrily shoots at English with a pistol, causing him to drop the crown. Moments before Sauvage is crowned king, English drops from the wire after being shot, lands on the throne, and is crowned instead. In his singular act as king, English has Sauvage arrested and restores the Queen to the throne, requesting a knighthood as a reward.

In the final scene, English and Lorna drive to southern France for a romantic holiday, only for English to accidentally launch Lorna out the car by pressing the ejection seat button. Lorna lands in a hotel swimming pool, where Bough happens to be vacationing as well as a man identical to the assailant that English described to Pegasus earlier in the film.

Johnny English was in Tibet training for his balance for his reincarnation. Johnny was done training, but the sensei tells English to go back to London for an important mission. In London, English was briefed and given the mission by Pegasus, and meets Tucker who was going with him as his partner to Hong Kong to collect the keys. In the gadgetry, English was given a Rolls Royce and was off to Hong Kong. English and Tucker were in Hong Kong for the keys, but the lady kills a civilian for giving answers to the Chinese man. English was in the hotel talking to a man who has a key, but the cleaner lady assassinates the man, a Chinese assassin subsequently grabs the key and English chases him. English eventually fights the Chinese assassin and some assassins assist him, but English neutralizes them and retrieves the key. English eventually made it back to Pegasus' house, but unfortunately, loses the key, due to one of the Chinese hitmen stealing it, so English stays put.

English looks around, but an assassin appears that turned out to be the mother of Pegasus, but not the Chinese maid. English goes in the kitchen to apologize to Pegasus' mother, but it turns out to be the real Chinese maid killer, who attacks English and runs away. English pursues her, but he ends up attacking Pegasus' real mother due to mistaking her for the maid, and she hits English in retaliation. Thanks to Kate Sumner, MI7's behavioral psychologist, helping Johnny access his suppressed memories of the Mozambique mission using hypnosis, he's able to identify the Russian spy Artem Karlenko as another Vortex member, who is masquerading as millionaire Sergei Pudovkin. English and Tucker then went to his the golf club to meet Karlenko for golfing. Johnny tried to ask Karlenko what he knew, but the female Chinese assassin shoots him before he can say everything.

Johnny, Tucker and Karlenko escaped in Karlenko's helicopter safely back to the hospital, and though Karlenko dies of his wound, he reveals the other member of Vortex is a mole in MI7. English then meets Simon Ambrose to find out who it is, and he tells him he suspects Quartermain. Tucker then confronts Ambrose and accuses him of being the traitor, but Johnny naively dismisses his accusations and lets Simon go with Karlenko's key. Johnny then goes to the church to confront Quartermain, but it soon becomes apparent that Ambrose has framed him as the final vortex member. MI7 agents then ambush Johnny and chase him. Johnny was injured by one of the MI7's agent with a Walther PPK silencer, but he manages to escape in a stolen wheelchair in a chaotic pursuit through London.

Johnny eventually finds refuge and lays low in Kate Sumner's flat, who he manages to convince of his innocence. However, Simon subsequently picks Kate up to go to Switzerland where his Outpost is, and Johnny was sad. Johnny was still staying at Kate's apartment, but the Chinese assassin ends up coming along to vacuum and notices him. Thankfully, English escapes in the shoot. English then goes to apologize to Tucker and persuades him to join in infiltrating Le Bastion, a fortress in the Swiss Alps where the talks are to be held, and they're off. In Switzerland, English and Tucker were at first successfully infiltrating the fortress, but English accidentally activates a distress beacon, alerting the guards to their presence. English then commands Tucker to knock him out and put him inside a body bag so they will be taken into the fortress. Inside, English manages to escape the body bag and warns Pegasus of the threat, but accidentally consumes a drink spiked with the drug, and subdues Pegasus on Ambrose's command.

Assigning English as the Prime Minister's bodyguard in place of Pegasus, Ambrose orders him to assassinate the Chinese Premier using a pistol disguised as lipstick, initially designed for Pegasus; English tries to resist the drug. Tucker interrupts Ambrose's communication feed with music before Ambrose resets it, exposing himself as the traitor. English resists again and shoots Ambrose, who escapes while the drug enters its lethal stage and English loses consciousness.

Thankfully, Sumner arrives and revives English with a passionate kiss, after which he goes after Simon. He pursues him down the mountainside and eventually engages in a fistfight with him in a cable car. Johnny manages to eventually overpower him, but falls out of the cable car, after which Simon shoots at him. English tries to uses an umbrella missile launcher as a bulletproof shield, mistaking it as such, and closes it in frustration when it doesn't work, which launches a missile at the cable car and kills Simon by blowing it up. Back in London, English was rewarded for his heroics by having his knighthood reinstated, but the Chinese lady attacks English again in the disguise of the Queen. English finds and apprehends her, but he only finds out it's the real Queen Elizabeth when he finds out the Royal guards captured the real Chinese assassin.

Though English sees himself as an accomplished agent, he proves to be incompetent, clumsy, dim-witted, cold-hearted (usually out of incompetence) and plain silly. Yet he does not seem to regret or think about what he had done wrong. In 2006, he was head of security at President Chambal's Inauguration Day. He was then distracted by a seductive woman who was paid by Vortex to distract him while President Chambal was killed. This resulted in him being stripped of his knighthood and his exile to Tibet for five years. 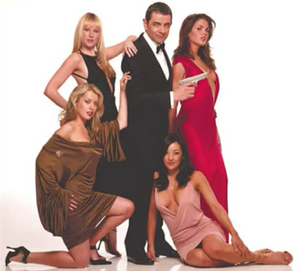 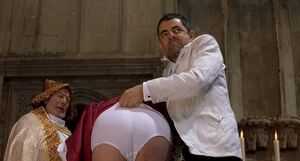