Funny Valentine and His Agents

Diego Brando (a Rival & an Enemy)

Johnny Joestar (ジョニィ・ジョースター Joni Jōsutā?) is the main protagonist of Part VII: Steel Ball Run. He also appeared in Part VIII: JoJolion. A paraplegic ex-jockey, drawn by Gyro Zeppeli's mystical abilities, Johnny develops an aim to redeem himself with a victory in the Steel Ball Run race. Johnny starts out as a supporting character to Gyro. When Steel Ball Run was announced as Part VII in Volume 5 (a turning point for the whole series, switching from Weekly Shonen Jump to seinen magazine Ultra Jump) Johnny gradually comes to stand as the main protagonist alongside Gyro. Johnny is alternate counterpart to Jonathan Joestar, protagonist of Part I.

Johnny is a young man of average to above-average height and slim to medium build. He has light eyes, and light, shoulder-length hair curling upwards at its ends. Johnny always wears a knit cap, printed with many small five-pointed stars. His hair sticks out of holes on either side of the top, taking a shape like short horns. A seemingly full-size horseshoe hangs from the front; framing an image of the dark silhouette of the profile of a horse's reared head. Johnny wears similarly star-patterned pants; of a piece with footwear bearing spurs. He commonly wears a light-colored, hooded, short-sleeved top; printed with thick lines in the approximate formation of a harness (later, with patches in the shape of hearts adorning both shoulders). A long feather (bordered by black with one black spot at its tip) emerges from under the back of his collar; and he wears wrist cuffs patterned with stars and stripes. In cold weather, Johnny wears a longer-sleeved top of a similar design. His collar is outlined with fur, and he keeps several feathers at his back. As a paraplegic, before the beginning of the race he is seen using a wheelchair; but during, he is usually mounted on his horse, Slow Dancer. During the course of the series, Johnny gradually changes into a more realistic appearance; with slightly wavy hair and a slightly fuller build.

Johnny first seeks Gyro Zeppeli's tutelage in the ways of the Spin in order to regain the use of his legs. Most often, Johnny channels the Spin by the use of his Stand, Tusk; developed first with the power of the Corpse's left hand, and further with Gyro's help. Its form varies, depending on the sort or style of Spin Johnny chooses to employ. 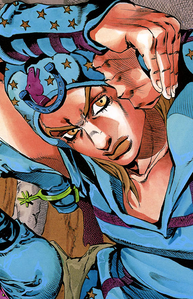 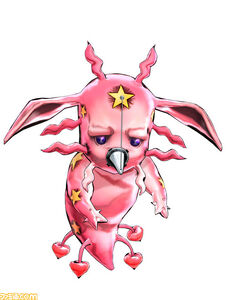 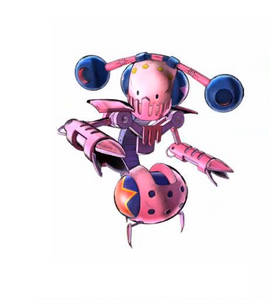 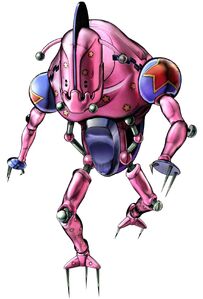 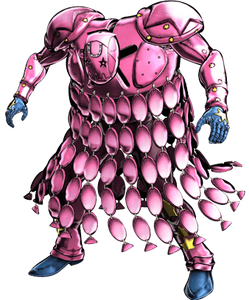 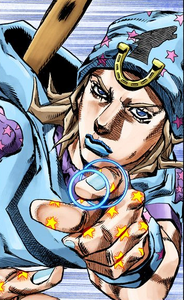 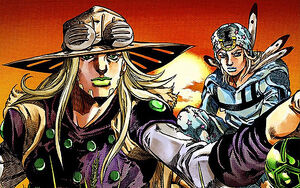 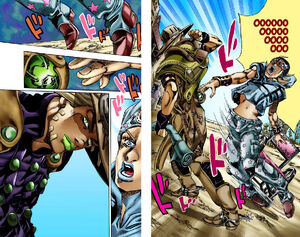 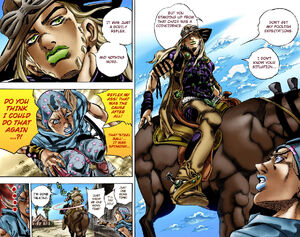 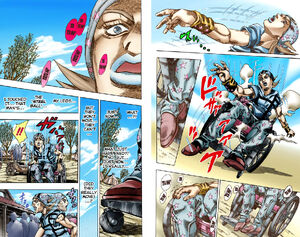 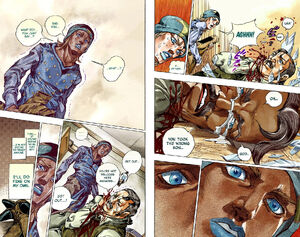 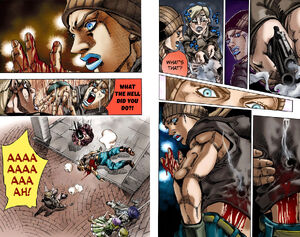 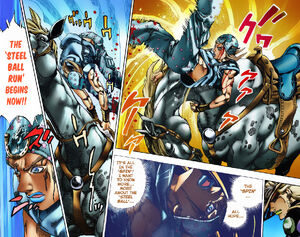 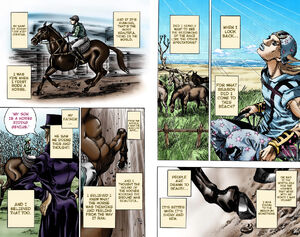 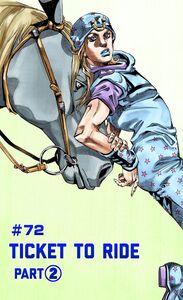 Retrieved from "https://hero.fandom.com/wiki/Johnny_Joestar?oldid=1749861"
Community content is available under CC-BY-SA unless otherwise noted.