Johnny Lawrence is the tritagonist of The Karate Kid series. He serves as the central antagonist of the 1984 film The Karate Kid, a minor character in The Karate Kid II. He later returns as one of the two main protagonists (alongside Daniel LaRusso) of the Netflix series Cobra Kai.

He is portrayed by William Zabka, and Owen D. Stone and Thomas Parobek as a child.

Johnny was the best student of John Kreese's Cobra Kai Dojo and the leader of the gang of bullies representing the dojo, as well as the ex-boyfriend of Ali Mills.

Throughout the film, Johnny torments and bullies the protagonist Daniel LaRusso. But when Kreese told Johnny to "sweep the leg" in order to beat Daniel at the All-Valley Karate Tournament, Johnny gives Kreese a frightened glance (while also possibly realizing that Kreese had gone too far).

After he lost to Daniel, Johnny shows respect to Daniel and gives him the first-place trophy. With that, he and Daniel patch things up and became former rivals.

At the beginning of the second film, while Johnny was perfectly fine with winning second-place, Kreese was not as he broke the trophy in two after Johnny called him a sore loser. After an argument between Kreese and Johnny (which Daniel and Miyagi take notice of), Kreese violently berates Johnny, but Miyagi stops him. After that, Johnny and the rest of the Cobra Kai students left Kreese in the parking lot, now seeing Kreese for the kind of man he really was.

34 years after losing the tournament, Johnny is down on luck. When he meets his new neighbor Miguel, he is hostile with him; he later beats up a group of bullies who were harassing Miguel, who asks him to teach him karate. At first, Johnny refuses, but later changes his mind and decides to train him. He reopens the Cobra Kai dojo and managed to have it reinstated, which causes his rivalry with Daniel to get reignited. He later gets more students at the Cobra Kai thanks to Miguel. He teaches all of them to strike first, and act merciless to their opponents, which is what Kreese taught him. While Cobra Kai was initially banned from the All Valley Tournament because of the actions of Kreese, Terry Silver and Mike Barnes in 1985 (in The Karate Kid Part 3), Johnny convinces the committee to reinstate Cobra Kai.

During the tournament, his students Miguel and Eli (Hawk) make it to the semifinals, but Johnny's son Robbie also makes it to the semifinals. During the semifinals, Hawk commits an illegal move by kicking Robbie in the shoulder while they weren't fighting, which got him disqualified. Johnny got angry at Hawk for what he did, and was worried for Robbie. In the final round, Miguel attacks Robby's shoulder which is dislocated, thanks to Hawk, and even yanks his shoulder after losing the point. When Johnny tells him not to fight dirty, Miguel said there is nothing dirty about winning, which makes Johnny realize what he has turned Miguel into. While Miguel wins the tournament for Cobra Kai, Johnny is upset at what happened, and even apologizes to Robby for it as well.

While drinking his sorrows upon looking at the winning trophy, Johnny is visited by an arriving Kreese (who has bigger plans of putting Cobra Kai up to the top by all means, much to Johnny’s distress). In Season 2, he briefly fights his former sensei John Kreese who tries to be let back in Cobra Kai which Johnny refuses. Johnny berates Miguel and Hawk for their dishonorable techniques at the tournament. After Kreese apologizes and gives him a fixed second place trophy, Johnny agrees to give Kreese another chance. However, this does not go well, as Kreese teaches his ways to the Cobra Kai students behind Johnny's back with actions such as vandalizing the Miyagi-Do dojo.

One day Johnny goes on a motorcycle trip with his old friends from the first Karate Kid film (except Dutch, who is mentioned to be incarcerated at a state penitentiary) and leaves Kreese with the Cobra Kai students, corrupting them with the idea of "no mercy" unbeknownst to Johnny. During the trip, Johnny's friend Tommy who is suffering from terminal cancer, dies overnight. When Johnny realizes Kreese is corrupting his students, he expels him from the Cobra Kai dojo. Johnny tries dating through a dating app, but is unsuccessful.

When he hears Miguel's mother Carmen Diaz's boyfriend talk about how he plans to dump her, Johnny beats him up and asks Carmen on a date, which she accepts. They go on a date in the penultimate episode of Season 2 where they wind up at the same table next to Daniel LaRusso and Amanda which both him and Daniel are opposed to but wind up having a great time. When his son Robby and his girlfriend Samantha (Daniel's daughter) get drunk at a party, they stay the night at Johnny's house, which Daniel finds out about and they fight until being stopped by Robby and Samantha.

Johnny drops Robby off at school, where a big brawl breaks out consisting of a fight between Miguel and Robby where Miguel wins and takes Johnny's lesson of showing mercy but is kicked off a balcony by Robby. Johnny visits him at the hospital as Carmen sends him away from herself and Miguel. Johnny visits the Cobra Kai dojo to see Kreese took over Cobra Kai legally while he was away and all of his students turned on him for Kreese. He goes to the beach and heavily drinks throwing his phone in the ocean, where he misses a Facebook friend request from Ali, his high school ex-girlfriend.

In Season 3, while Miguel is in a coma a drunken Johnny starts a fight with two men at a bar over changing the channel where he is too uncoordinated from being drunk where he loses and gets arrested. After leaving jail, he visits the hospital and is unable to see Miguel as only family, doctors, and patients are allowed in the ICU. He intentionally injures himself to get into the ICU. Meanwhile, Robby is on the run after kicking Miguel off a railing and Daniel visits Johnny at his home as they team up to look for Robby but eventually go their separate ways after an argument where Johnny is too aggressive with a person who knew where Robby was.

Miguel wakes up from the coma, but is unable to walk. Johnny walks him through irregular methods of physical therapy to try to get him to walk again; it starts off slow, but he is eventually able to get Miguel walking again. He finally sees Ali's friend request and makes an over effort to make himself look good for her. He opens up a dojo called Eagle Fang with Miguel and former Cobra Kai students that were kicked out by Kreese. He attempts to convince his other former students, including Hawk, to leave Kreese but they refuse. Ali arrives back in town and spends an entire day with Johnny where they share a brief intimate moment but is interrupted by a phone call. They go to a party together which Daniel is attending, where Ali convinces them to lay their past issues aside.

Unbeknownst to both of them, the Cobra Kai students invaded the LaRusso house and fought against Miyagi-Do's students. The Miyagi-Do students won, as Hawk decided he'd had it with being a bully (after he realized the kind of person he'd become, and also recalling that Johnny and Miguel were right and that Kreese's methods were wrong) and chose to leave Cobra Kai for good by attacking his fellow Cobra Kai's, while also reconciling with Miguel and Demetri, thus forming an alliance between Eagle Fang and Miyagi-Do. Johnny learns of this and goes to the Cobra Kai dojo to confront Kreese, but sees he has taken Robby under his sleeve as his new student. This angers Johnny to the point where he attacks Kreese, and has the significant upper hand before being stopped by Robby. Robby unsuccessfully tries to hurt Johnny as Johnny accidentally throws him into a locker, hurting him. Kreese then has the upper hand on Johnny until Daniel arrives at the dojo and beats Kreese. Robby stays with Kreese, but the three agree to finally settle it once and for all at the upcoming All Valley Tournament.

At the Miyagi-Do dojo, Daniel and Johnny are officially allied with the students of Eagle Fang and Miyagi-Do taught from both of the sensei's.

In the original movie, Johnny is the leader of the Cobra Kai and the meanest of them. He bullies and harasses Daniel due to the latter becoming friendly with Ali. He doesn't show the enemy any mercy which is what Kreese has taught him to do. In the final round of the tournament however, when Kreese tells him to sweep Daniel's leg Johnny is shocked, and he express reluctance to do so which shows that Johnny knows that things are going too far. After Daniel defeats Johnny, the latter shows respect to Daniel by handing him the trophy and saying you're alright.

34 years later, Johnny is still bitter over losing to Daniel. He is initially hostile with Miguel when he meets him. When he begins training him in karate he teaches him to be merciless. However, when Miguel's mom stops Johnny from seeing him, Johnny realizes that he really cares about him, and that Miguel is the only person that still hasn't given up on him. After more students enroll in the dojo Johnny makes several negative remarks to them which causes several of them to quit. After realizing his mistake, he stops being so harsh with them.

His relationship with his son Robby is strained due to Johnny neglecting him his whole life, which has made Robbie resentful towards his father, and bent on doing everything he can to make Johnny suffer. While Johnny has expressed desire to make amends with Robby and Robby himself did seem to want to work things out with Johnny after Shannon tells him Johnny wanted Robby to live with him, Robby goes back to disliking him after seeing Johnny hugging Miguel, though Johnny was unaware that Robby saw him. Despite their failed relationship Johnny does care about Robby, and Robby in turn does show that he does care for Johnny by accepting his apology following his loss in the all valley tournament.

After reopening the Cobra Kai dojo his rivalry with Daniel is reignited. Daniel raises his rent just so Cobra Kai gets closed down which angers him. He tries to prevent Cobra Kai from getting reinstated in the All-Valley tournament which angers him. After Daniel's cousin Louie burns his car, Johnny confronts Daniel and the two almost get into a fight. However, he two bond together on a car ride where they end up visiting Daniel's old apartment and reveal their stories before they met. However, they go back to being rivals after Johnny finds out that Robbie has been training with Daniel, though Daniel was unaware that Robbie was Johnny's son.

After his student Hawk gets disqualified in the semifinals of the tournament for making a cheap move against Robbie, Johnny gets angry at him for going far. When attacking Robbie's injured shoulder in the finals, Johnny tells him not to play dirty, and then realizes that he has gone too far. Despite Miguel winning the tournament for the Cobra Kai, Johnny expresses guilt for what has he turned Miguel into. 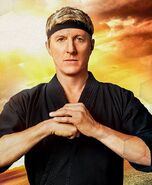