Hanging in the sisters' lab

Dependent on each episodes.

Arrogant Delinquent
Jonathan Xavier "Johnny" Test is the titular main protagonist of the series that has the same name. He is a heroic, albeit troublesome, narcissistic and widely disrespectful 11-year-old boy who is the brother of Susan and Mary and the son and Hugh and Lila. His best friend is a talking dog, Dukey.

He is voiced by James Arnold Taylor who also voices Crash Nebula from The Fairly OddParents, Ratchet from the Ratchet and Clank franchise, and Willy Wonka in the 2005 video game version of Charlie and the Chocolate Factory.

He is very hyperactive, and often messes with his sisters' inventions, causing trouble and mayhem, but just as often proves himself to be extremely clever such as by frequently tricking his genius sisters or saving the day from whatever danger happens to show up. Johnny can be considered very spoiled and stubborn, as he gets what he wants through deceit, blackmail, or manipulation, though he does love his sisters in a way only a brother can. Despite his flaws, Johnny is a very caring person, even if the situation he's in allows him to be selfish. A running gag for him is that he often feels bad about and hates seeing people cry, and tries to help them, knowing that will lead to pain and embarrassment. He has felt bad for the numerous occasions he's come out on tops, such as when he defeated a desperate penguin army or the time he helped his arch-nemesis return to his home planet, despite the threat of being double-crossed and the Earth's destruction. Even when a problem is solved, Johnny doesn't like bittersweet endings and will usually sacrifice as much as he needs to end an adventure happily, or at least in a way that benefits others more than himself.

He is frequently called the "kid with the flaming hair" due to having fiery red highlights in his blond hair, which styled up like Calvin's (of Calvin and Hobbes). He has blue eyes. As well as this, he is most often seen wearing green cargo pants and a black shirt with a radioactive symbol on it, which he wears under a navy blue jacket and a watch that he rarely uses. He sometimes wears orange and red swimming trunks and his disco outfit was a black shirt, dark gray pants, a black cap, black glasses, a yellow collar, and black shoes.

Johnny has an alter ego that he calls "Johnny X", who is a superhero that has different types of superpowers. A running gag for this form is that his hurricane hands never work, due to either the target being immune to it or other unforeseen factors. His most recurring superpowers include his ability to shapeshift, hurricane hands, and his most famous power: "lower posterior energy bursts" or "power poots," which are farts that turn into powerful flames. These powers have no status quo on usage.

In one instance he managed to keep his "power poots" for a couple of weeks, while his other powers were neutralized, and in another, his mutant powers ran out due to exhaustion, despite this not happening previously or thereafter. Though not a superpower, Johnny has been hardened by so many of his sisters' experiments gone-wrong that he has a high threshold for pain. He considers himself to be a master of "Say, Uncle," not relenting despite being punched in the face and having his arm twisted behind his back. Whenever his group suffers heinous injuries, he is usually the one with the least amount of bandaging. He is also able to fall off his roof or from similar altitudes without suffering a serious injury.

Though he doesn't know any of his family a challenge, Johnny is a cunning manipulator, especially towards them. He is adept at reverse psychology, guilt-tripping and ego-mongering. He frequently cons his sisters into leaving their lab by feigning the attention of their crush who lives next door to them. He is also not above manipulating his best friend into helping him or sharing his embarrassment or pain, if not taking all of it. He also tends to use the same excuse of adopting his best friend as a means of coaxing, even though said excuse has more than run its course.

Due to his gaming behavior, Johnny is also a master strategist, often being the one who nails down the final solution to a situation. His experiences in solving problems also tend to come from living the situation within the same episode, except on a smaller scale. An example of this is when he stopped an animated monster truck by introducing it to a girl, after teaching the same lesson to his sisters with their hamsters.

One obvious aspect of Johnny's life is that the experiments he's the test subject often lead him into trouble. Some of the outcomes have proved to have the most astounding circumstances and be the defining moments of his character. 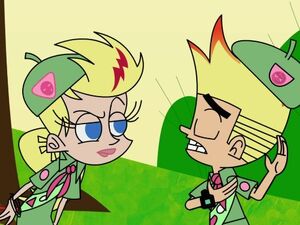 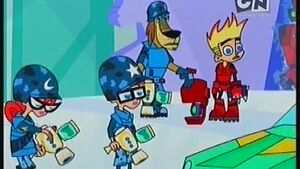 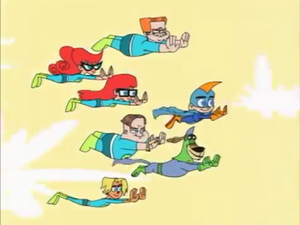 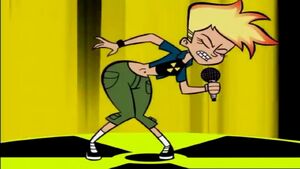 Johnny Test as a teenage girl.