Johnny Utah is the main protagonist in the 1991 action film and its remake Point Break.

He was portrayed by Keanu Reeves in the 1991 film, who also portrayed "Ted" Theodore Logan in the Bill & Ted films, Jonathan Harker in Bram Stoker's Dracula, Officer Jack Traven in Speed, Johnny Mnemonic in the 1995 science fiction film of the same name, Neo in the The Matrix franchise and John Wick in the film series of the same name.

Former Ohio State Buckeyes quarterback and rookie FBI. Agent Johnny Utah is assigned to assist experienced agent and Vietnam veteran Angelo Pappas in investigating a string of bank robberies by the "Ex-Presidents", a gang of robbers who wear face-masks depicting former US presidents Ronald Reagan, Richard Nixon, Lyndon B. Johnson, and Jimmy Carter to disguise their true identities. They raid only the cash drawers in the banks that they rob—never going for the vault—and are out within 90 seconds.

Pursuing Pappas' theory that the criminals are surfers, Utah goes undercover to infiltrate the surfing community. He persuades orphaned surfer Tyler Endicott to teach him to surf after she saved him from drowning during his first attempt at surfing. Through her, he meets Bohdi, the charismatic leader of a gang of surfers consisting of Roach, Grommet, and Nathaniel. The group are initially wary of Utah, but accept him when Bodhi recognizes him as the former college football star. As he masters the art of surfing, Utah finds himself increasingly drawn to the surfers' adrenaline-charged lifestyle, Bodhi's philosophies, and Tyler. Following a clue retrieved by analyzing toxins found in the hair of one of the bank robbers, Utah and Pappas lead an FBI raid on another gang of surfers. Despite their criminal records, these surfers turn out to not be the Ex-Presidents and the raid inadvertently ruins a DEA undercover operation.

Watching Bodhi's group surfing, Utah begins to suspect that they are the "Ex-Presidents," noting how close a group they are and the way one of them moons everyone in the same manner one of the robbers does when leaving a bank. Utah and Pappas stake out a bank and the Ex-Presidents appear. While wearing a Reagan mask, Bodhi leads Utah on a foot chase through the neighborhood, which ends when Utah causes an old knee injury to flare up again after jumping into an aqueduct. Despite having a clear shot at Bodhi, Utah does not shoot and Bodhi escapes.

At a campfire that night, it is confirmed that Bodhi and his gang are the Ex-Presidents. Shortly afterwards, Bodhi aggressively recruits Utah into going skydiving with the group and he accepts. After the jump, Bodhi reveals that he knows Utah is an FBI agent and has arranged for his friend Rosie, a non-surfing thug, to hold Tyler hostage. Utah is thus blackmailed into participating in the Ex-Presidents last bank robbery of the summer. As a result, Grommet, along with an off-duty police officer and a security guard—who both try to stop the robbery—are killed. Angered by Grommet's death, Bodhi knocks Utah out and leaves him at the scene.

Defying their senior officer who arrests Utah for armed robbery, Pappas and Utah head to the airport where Bodhi, Roach, and Nathaniel are about to leave for Mexico. During a shootout, Pappas and Nathaniel are killed, whereas Roach is seriously wounded. With Roach aboard, Bodhi forces Utah onto the plane at gunpoint. Once airborne and over their intended drop zone, Bodhi and Roach put on their parachutes and jump from the plane, leaving Utah to take the blame again. With no other parachutes available, Utah jumps from the plane with Bodhi's gun and intercepts him. After landing safely, Utah's knee gives out again, allowing Bodhi to escape Utah's grasp. Bodhi meets with Rosie and releases Tyler, who reunites with Utah. Roach dies of his wounds, and Bodhi and Rosie leave with the money.

Nine months later, Utah tracks Bodhi at Bells Beach in Victoria, Australia, where a record storm is producing lethal waves. This is an event Bodhi had talked about experiencing, calling it the "50-Year Storm." Utah attempts to bring Bodhi into custody, but Bodhi refuses. During a brawl in the surf, Utah manages to handcuff himself to Bodhi, who begs Utah to release him so he can ride the once-in-a-lifetime wave. Knowing Bodhi will not come back alive, Utah releases him, bids him farewell, and sees him step towards the wave. While the authorities watch Bodhi surf to his death, Utah walks away, throwing his FBI badge into the ocean.

Johnny Utah is an extreme sports athlete in this iteration. One day him and his friend Jeff were transversing a steep ridgeline on motorbikes. The run ends with a jump onto a lone stone column, where Jeff overshoots the landing and falls to his death, scarring Utah emotionally.

Seven years later, Utah is an FBI agent candidate. He attends a briefing on a skyscraper heist, in which the criminals stole diamonds, escaping by parachute, in Mumbai. A similar heist happens over Mexico where the criminals unload millions of dollars in bills, then disappear into the Cave of Swallows. Utah's research concludes that they were done by the same men, who are attempting to complete the Ozaki 8, a list of eight extreme ordeals to honor the forces of nature. They have already completed three, and Utah predicts they'll attempt the fourth on a rare sea wave phenomenon in France. After presenting his analysis, Utah is sent undercover to France under a field agent named Pappas. They reach France and Utah gets help from others to surf the tall tube wave.

As he goes in, there is already another surfer riding the wave, leaving Utah unstable. Utah gets sucked into the wave and faints, but the other surfer bails and rescues Utah. He wakes aboard a yacht with the surfer, Bodhi, and his team Roach, Chowder and Grommet. They leave him to enjoy the party and he gets acquainted with a girl, Samsara. The next day, Utah finds the men in an abandoned Paris train station after he overhears them talking about the location. Bodhi gives him an initiation fight and soon he is accepted into the circle. They travel to the Alps for the next ordeal: wingsuit flying through "The Life of Wind" cliffs. The four succeed in their attempt and spend some time together with Samsara. The next day, they climb the snow peaks for the sixth ordeal, snowboarding down a steep mountain of snow. They reach their spot, but Utah decides to extend his line, so the others follow him. Chowder slips and falls to his death, and Utah becomes depressed about it.

After a party, Samsara explains that she and Bodhi both knew Ono Ozaki when they were young, that her parents died in an avalanche accident and Ozaki gave her a home after. She explains further that Ozaki actually completed his third ordeal, despite what was widely believed. He did not die attempting the ordeal, but was actually killed by a whaling ship crashing into his boat while he was trying to save humpback whales. On his boat, a young boy, Bodhi, decided not to tell the truth of his story but to finish what Ozaki started.

Next they travel to a gold mine where Bodhi detonates explosives Grommet and Roach planted. After blowing his cover, Utah chases Bodhi, managing to trip his bike. Bodhi escapes because Utah cannot stand up after the crash. The FBI freezes Bodhi's sponsors' assets; Bodhi plans to rob a nearby Italian bank on a mountain top. Utah and the police intercept the group, resulting in a crossfire that kills Roach. As the group flees, Utah chases and shoots one of them to death, who is revealed to be Samsara and not Bodhi.

Utah finds the location of the next ordeal: free solo climbing with no safety beside Angel Falls in Venezuela. He finds Bodhi and Grommet and chases them on the climb, but Grommet falters, falling to his death. Utah catches up to Bodhi, but he falls backward down the waterfall, completing what would have been the last ordeal; Bodhi has to redo the fourth ordeal because he bailed out on the wave when he chose to save Johnny. Seventeen months later, Utah finds him in the Pacific facing another giant wave. As Utah tries to get Bodhi to come back with him and pay for his crimes, he eventually lets Bodhi attempt to surf it, both knowing that he will not come back. The wave engulfs Bodhi, and Utah continues his career in the FBI and begins going through his own eight ordeals. 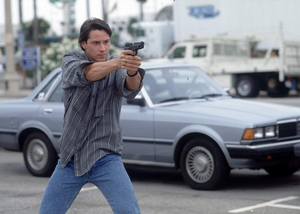 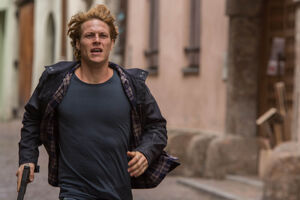 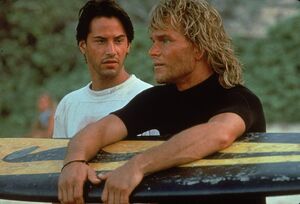 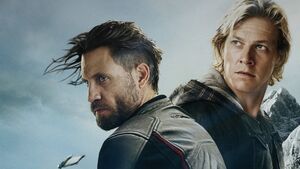 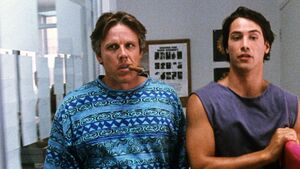 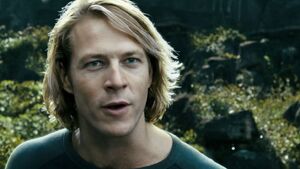 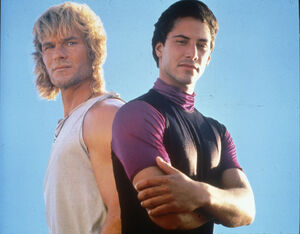 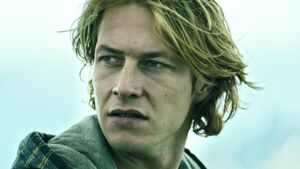 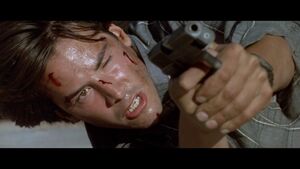 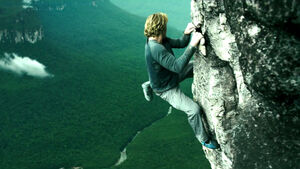 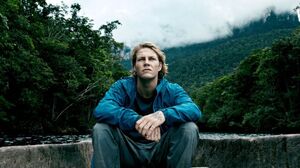 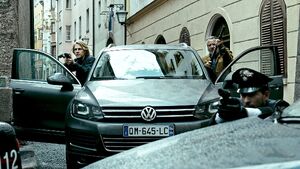 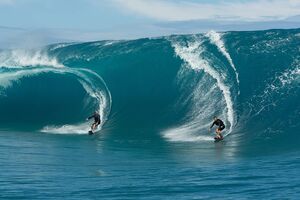 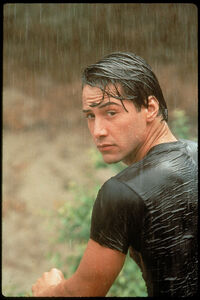 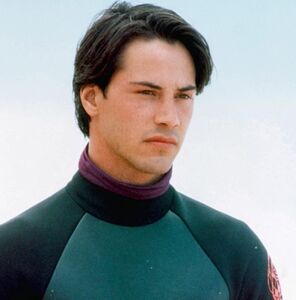 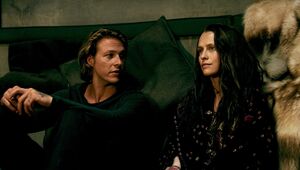 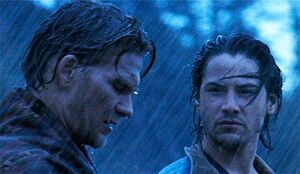 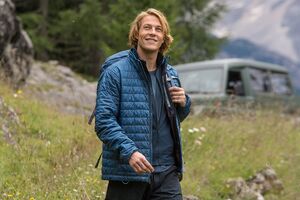 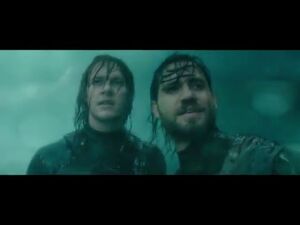 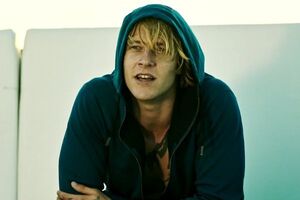 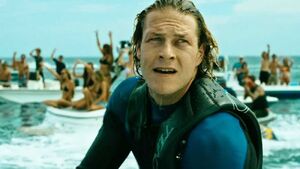 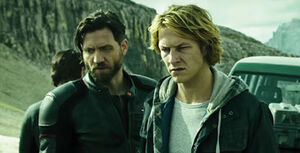 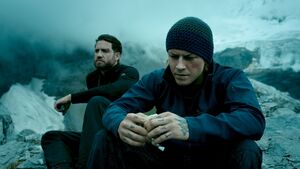 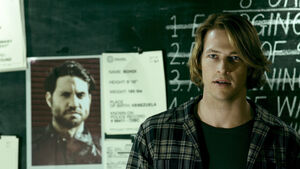 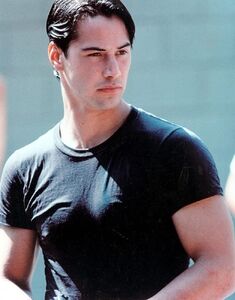 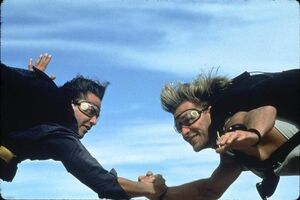 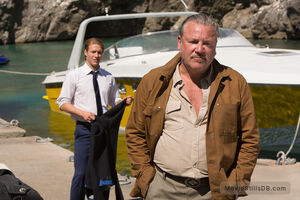 Add a photo to this gallery
Retrieved from "https://hero.fandom.com/wiki/Johnny_Utah?oldid=2228114"
Community content is available under CC-BY-SA unless otherwise noted.