Alien, Giant Robot, Medic
Jolt has a tendency towards mischief making. Like any prankster, he's pretty impulsive, and if trouble rears its head, you can bet Jolt is going to try to be in the middle of it. (Though he more often ends behind it, mostly out of focus, as luck would turn out.) Luckily, he's got the fighting ability to make sure his head stays on his shoulders, utilizing electric whips in battle.

When the Autobots mobilized in response to a sudden surge in Decepticon activity, Jolt rolled into action at the head of the pack, but he was not among the Autobot team who fended off Megatron and Starscream after the two Decepticons killed Optimus Prime in a forest brawl. Jolt reunited with the other Autobots before they headed back to the NEST base on Diego Garcia, but the team was scarcely given any time to mourn Prime's passing; as soon as they returned, they were accosted by military forces under the command of Theodore Galloway. The emotionally brittle Autobots did not take this show of force well, and charged their weapons; Jolt began emitting bright sparks of electricity in anticipation of a fight, but things soon calmed down as Galloway announced that NEST was being disbanded by presidential order.

Jolt later accompanied the Autobots and their human allies to Egypt, for a climactic battle against The Fallen's Decepticons. He is seen shooting at Decepticons behind Sideswipe. During the course of the battle, Sam Witwicky used the Matrix of Leadership to bring Optimus Prime back to life, at which point the aged Jetfire volunteered to sacrifice himself, so that Optimus could use his parts to give himself a power boost. Following Ratchet's directions, Jolt used his electric whips to link Prime up with Jetfire's remains, generating an electromagnetic field that levitated and bonded the necessary parts to Prime's body, giving him a powerful new flight-capable form which he then used to destroy The Fallen.

Note: this comic strip functions also funtions as a prequel to Dark of the Moon, which does not follow the continuity of the IDW comics.

While Jolt goes unmentioned in Dark of the Moon, he does appear in the prequel comic "Rising Storm". Jolt learned that Bumblebee was defending Sam Witwicky from a Decepticon attack all alone, and was eager to get out there to help him. To his disappointment, Optimus Prime instead ordered him, Knock Out and Dune Runner to remain on Diego Garcia and keep an eye on the captive Fearswoop along with a number of confused Autobot refugees liberated from Carter Newell's control. Jolt took to guarding Fearswoop, but while he was making himself busy telling the prisoner off and reading comic books, the corpse of Knock Out suddenly crashed through a wall, courtesy of Shockwave. He prepared to take the intruder on with his electric whips, but Shockwave was unimpressed and shot him down. Jolt desperately tried to contact Optimus Prime for help, but his message failed to get through and he was killed by Shockwave.

Jolt's head was seen in The Last Knight at Cade's junkyard next to Wheelie, thus confirming his death in Rising Storm. 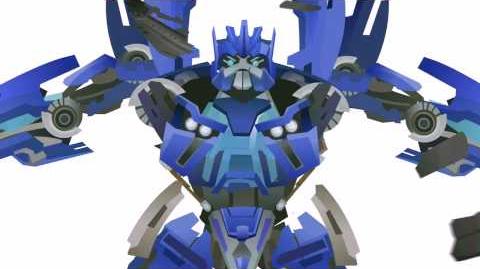