Heroes Wiki
Register
Don't have an account?
Sign In
Advertisement
in: Mature, Protectors, Protector of Innocence,
and 72 more
English

Having walks with Ghost

Jon Snow is one of the main protagonists of the A Song of Ice and Fire franchise, in both the book series and its television adaption Game of Thrones. He is introduced as Lord Eddard (Ned) Stark's illegitimate son. From infancy, Jon is raised by Eddard as his own alongside Eddard's lawful children at Winterfell and the identity of Jon’s mother is unknown to all but Eddard. Jon has five half-siblings: an older brother Robb Stark, two younger sisters Sansa and Arya Stark, and two younger brothers Bran and Rickon Stark.

Later, after the television series continues where the novels leave off, it is revealed Jon is the son of Lyanna Stark, Eddard's younger sister, and Prince Rhaegar Targaryen, making Jon not only the nephew of Eddard and cousin of Robb, Sansa, Arya, Bran, and Rickon but also the true heir of the Iron Throne. This also makes him the nephew of Daenerys Targaryen and Stannis Baratheon's second cousin once removed. Jon did not know his real parentage with only Eddard knowing the truth. However, Eddard claimed Jon as his illegitimate son to protect him from the Baratheon regime. Unaware of their blood connection, Jon and Daenerys fall in love and become lovers. However, as of the fifth book A Dance With Dragons, this revelation of Jon's parentage is not yet confirmed. Jon is Lord Commander of the Night's Watch, a thousands of years old organization that guards the Seven Kingdoms of Westeros against any threat that comes from north of the Great Wall protecting them.

In the sixth season of the television series, Jon is resurrected and later elected the new King in the North after his late brother (revealed to be a biological cousin) Robb Stark. In the seventh season, Jon Snow's real name is revealed to be Aegon Targaryen and the heir to the Iron Throne, ahead of Daenerys.

He is portrayed by Kit Harington.

Due to being raised by Ned Stark in Winterfell, Jon Snow has a strong sense of honor, duty, and morality, striving to do the right thing when faced with difficult choices. Like his father, Jon is solemn, somber, with a drive to protect. He has a deep love for his family and is close with his father, his uncle, and his half-siblings, particularly Robb and Arya. Jon is also mature and perceptive beyond his age. However, despite being more mature than the other Stark children, he initially possesses a childish arrogance when he first arrives at the Night's Watch due to his privileged upbringing, resulting in him being a more skilled swordsman than the other recruits. This attitude attracted him the nickname "Lord Snow". However, after he is scolded by Donal Noye and made to realize his advantages, Jon reaches out to the other recruits, teaches them how to fight, and becomes more open towards people. Despite a solemn nature, Jon is empathetic and possesses a protective streak, particularly showing his compassionate side to other outsiders, such as his little sister Arya, Samwell Tarly, Grenn and Pyp.

Though Jon grows up with loving relationships with most of his family, the societal stigma of his illegitimate status and the cold treatment by his father's wife results in Jon feeling like an outsider among his family. His illegitimate status also results in a strong desire to prove himself, believing that a good way for a bastard child in his position to gain honour and respect is to join the Night's Watch as status means less among the Watch's ranks. Jon dreams of emulating his uncle Benjen, First Ranger in the Night's Watch, and initially aspires to become a ranger like his uncle. Jon's sense of duty is shown as strong when he grows remorseful of breaking his celibacy vows with Ygritte, as seen in Jon's thoughts in the novels.

Jon is also fairly shy around women, as shown during his first encounter with Ygritte, and as revealed to Sam, he was a virgin at the time he joined the Night's Watch. Snow did not try to have sex with women of wary that he could father an illegitimate child himself: having lived his life as a bastard, he felt that it wasn't a life another child should have to go through. When he is ordered to learn of Mance Rayder's plans to attack the Wall, Jon meets the spearwife Ygritte, who becomes his first love and Jon breaks his vow of celibacy with her. However, though their love conflicts Jon, he ultimately does his duty to the Night's Watch as he leaves Ygritte to return to Castle Black and warn his sworn brothers of Mance Rayder's planned invasion of the Seven Kingdoms.

Having grown up with a preconceived idea about the wildings as enemies in the past, Jon's time with the Free Folk changes his mind. He grows more fond of the wildings and develops compassion for them to the point that in both novels and series, he makes peace with the Free Folk after the Battle of Castle Black. In the novels, Jon allows the wildings to join the Night's Watch or take shelter at Castle Black, while in the TV series, he fights among them against the White Walkers at Hardhome.

Jon Snow is a recurring character in Telltale Game of Thrones video game.

He debuts in Episode 3: The Lost Words, after Gared gets into a fight with Finn. He tells Frostfinger he needs another man atop the wall and Gared accompanies him to the top of the wall. While in the elevator, Jon reveals that his brother was Robb Stark and tells him that there were 3,000 men at the Red Wedding and not one could save his brother from being butchered by Lord Walder Frey's men. 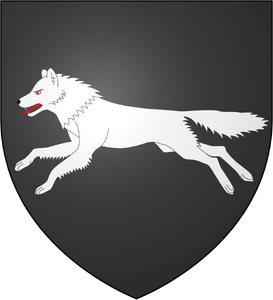 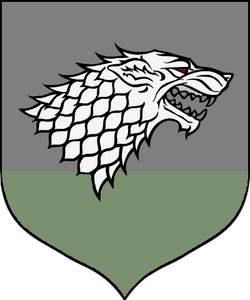 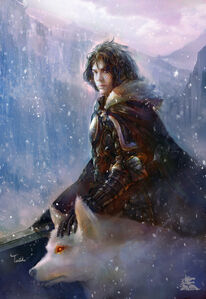 Jon Snow in the novels (with Ghost). 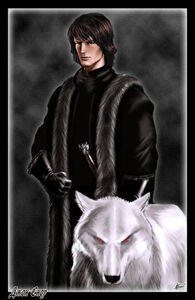 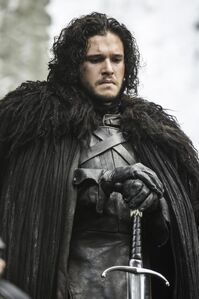 Jon Snow in the TV series. 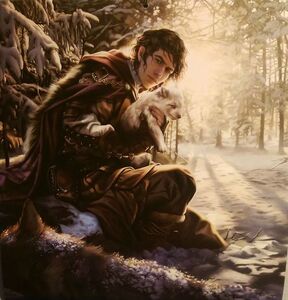 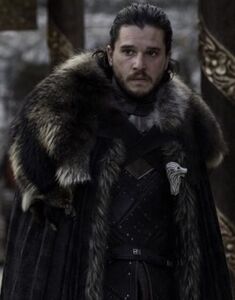 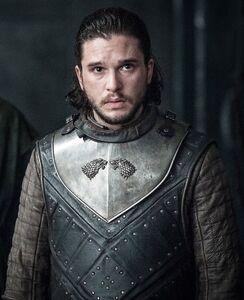