Looking out for children

To control his werewolf powers.

Jon Talbain is an English Werewolf from Darkstalkers. He is a loner trying to live a peaceful life.

Originally born from a human mother and a werewolf father, Jon's mother passed away right after giving birth to him, while Jon had no connection with his dad.  He was usually alone, he had lived a peaceful life as a human. Then, one full-moon night, the beast within him awoke and he turned into a werewolf. The transformation caused him to be shunned from human society. Though shocked by discovering he was a Darkstalker, Talbain harboured no animosity towards his parents, whom had never been a part of his life. Talbain cursed his fate, but was determined not to let the his primal instincts consume him. Following his inner voice, he devoted himself to fighting and pushing himself past his limits, believing that if he retained his inner humanity, he might regain his physical humanity as well.

After Pyron was defeated, Talbain's curse was lifted and regained his human form. Despite this, the adults of society still rejected him, and he found acceptance only amongst children. Although he sustained his human form for many years, he often felt that the beast still dwelled within him. One day, he heard a voice in the back of his mind and he turned into a werewolf once again. It was then that Talbain discovered it would be impossible for him to be rid of his curse.

Later on, he went face-to-face with his evil encounter, Dark Talbain. After the heated battle, he defeated his copied doppleganger, then Jon finally embraced his wolf counterpart and live his life as one. Despite being a werewolf, he takes care of orphans (As it's shown in his Darkstalkers 3 Ending).

Jon Talbain is a very skilled fighter in both hand-to-hand combat as well as ki-based attacks in his normal state. As a Werewolf, all of his powers are far greater. He also has a great sense of smell like most canids. He can transform into a Werewolf at night anytime by will power alone, it is also hinted in the UDON Comics that he can become stronger under a full moon. 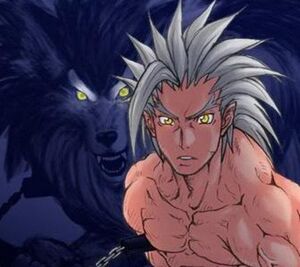