Jonah Woodson Hex is a Western comic book antihero created by the late writer John Albano, and the late artist Tony DeZuniga and published by DC Comics. Hex is a surly and cynical bounty hunter whose face is horribly scarred on the right side. Despite his poor reputation and personality, Hex is bound by a personal code of honor to protect and avenge the innocent.

His marksmanship is nearly superhuman and he is likely the best marksman ever shown in DC comics long history. In his movie he had the ability to talk to the dead while touching their corpse but they are in extreme pain and desire for him to allow them to return to the afterlife.

The majority of Jonah's adventures were never given actual dates, however, some significant events were given year references. The ones listed here are actually mentioned or calculated using dialogue or other references.

July 1851: Jonah's father, a physically abusive alcoholic, sells him into slavery to an Apache tribe in exchange for either a pile of pelts (Jonah Hex vol. 1, #7) or safe passage through Indian land (Jonah Hex vol. 2, #14). The two Jonah Hex series have different explanations, and it is unclear which is the canonical version of the story, if either.

1853: At age fifteen, Jonah saves the tribe's chief from a puma. The chief expresses his gratitude by adopting Jonah as his second son. Jonah eventually exceeds the chief's son, Noh-Tante, in the chief's eyes. (Jonah Hex vol. 1, #7)

1854: Jonah and rival Noh-Tante, in a tribal ritual of manhood, raid a nearby Kiowa village to steal ponies. Noh-Tante ambushes Jonah and leaves him to the Kiowas and tells the chief that Jonah is dead. Jonah is either 'rescued' by scalphunters who slaughter the Kiowas and shoot Jonah, leaving him for dead before a trapper finds him and nurses him back to health (Jonah Hex vol. 1, #7), or Jonah manages to defeat the Kiowas but does not return to the Apache village. (Jonah Hex vol. 2, #14) Once again, the story is conflicting.

1859: Jonah is engaged to Cassie Wainwright but she is killed by Indians the day before their wedding. (Jonah Hex vol. 1, #65)

January 1863: Jonah surrenders to the Union forces at Fort Charlotte. Jonah's platoon is subsequently captured and then slaughtered during an attempted escape known as the Fort Charlotte Massacre. Jonah is accused by the survivors of being a turncoat. (WWT #29, Jonah Hex vol. 1, #35)

May 2, 1863: Jonah accidentally shoots Stonewall Jackson as the General returns from a reconnaissance, inflicting the wound which cost him his arm & precipitated his death shortly after due to sepsis. (Jonah Hex vol. 1, #37)

April 23, 1865: Jonah surrenders (once again) to Union forces at the federal stockade in Lynchburg, Virginia, two weeks after Lee surrendered to Grant. (Jonah Hex vol. 1, #30) It is assumed, but not yet chronicled, that Jonah returned to the Confederacy after the Fort Charlotte massacre.

1866: Jonah locates his old tribe and tells the chief how Noh-Tante betrayed him years before. The chief decrees that this must be settled by a tomahawk battle. Noh-Tante secretly sabotages Jonah's tomahawk so that the handle will break. In an act of desperation during the fight, Jonah pulls a knife and kills Noh-Tante. As punishment for breaking the rules, Jonah is bound and the chief presses a heated tomahawk to the right side of Jonah's face giving him "The Mark of the Demon." The tribe then banishes Jonah. (Jonah Hex vol. 1, #8)

1874: While tracking down the kidnapper of Laura Vanden, Jonah once again comes in contact with the Apache chief and is captured. The chief admits to taking Laura and announces that he will kill Hex at sunrise. Jonah is rescued by White Fawn, his former girlfriend and widow of Noh-Tante. The chief kills White Fawn and Jonah kills the chief before he rescues Laura Vanden. (Jonah Hex vol. 1, #8)

1875: Jonah marries Mei Ling and promises to give up bounty hunting and gunfighting. (Jonah Hex vol. 1, #45)

August 1878: Jonah is transported to the year 2050 by Reinhold Borsten. Several documents reference the date of the time travel to be 1875, but a careful examination of events, dates, and corresponding timespans, place this event closer to 1878. (Jonah Hex vol. 1, #92)

1880: Jonah's mother dies and he learns that he has a half brother, Joshua Dazzleby, who is the sheriff and preacher in the town of Heaven's Gate, Colorado. (Jonah Hex: No Way Back)

1899: Jonah meets his grown son, Jason, in Mexico. Jonah learns that Mei Ling has died, but leaves before finding out that he now has a grandson, Woodson Hex II. (Jonah Hex vol. 2, #25)

1904: Jonah is gunned down and killed by George Barrow. Despite some reports to the contrary, Jonah was not killed during a gunfight, nor was he shot in the back. Jonah was sitting playing cards in a local establishment. As he took off his glasses to clean them, George Barrow stormed into the establishment and shot Jonah in the chest with both barrels of a shotgun. Barrow was then confronted by the local law. Barrow dropped his weapon and surrendered but the local sheriff killed Barrow in cold blood. (Jonah Hex Spectacular)

Being a "non-superhero", Jonah did not have a "Rogues gallery" comparable to costumed comic-book heroes, though he had a few adversaries who returned from time to time. The first and most notable of these to date was Quentin Turnbull, known at first as simply the man with the eagle-topped cane.

Turnbull was the father of Hex's best friend, Jeb Turnbull. During the American Civil War, Jonah actually surrendered himself to the Union forces after the passage of the Emancipation Proclamation, but he refused to betray where his fellow soldiers were camped. A Union soldier was able to determine the location of that camp by examining the dirt in the hooves of Jonah's horse. The Union soldiers captured all of Jonah's fellow soldiers and then later massacred most of them, inexplicably choosing to frame Jonah as a turncoat. Turnbull's son was one of those slaughtered, and Turnbull vowed his vengeance upon Jonah.

Turnbull hired an unnamed stage actor to impersonate Hex and help "destroy" him. This actor, naming himself "the Chameleon", was eventually hideously scarred in a fire started by Hex, and he vowed vengeance.

El Papagayo was a Mexican bandit running guns. Hex was hired by the United States Secret Service (actually a man hired by Turnbull to pose as a Secret Service agent) to infiltrate El Papagayo's band and bring him to justice. Hex was unsuccessful, and he and Papagayo met several more times over the years.

Tallulah Black is a character introduced in 2007. As a young woman she was savagely raped and mutilated by the men who murdered her family. She was saved by Hex, who helped her gain vengeance. She would go on to become a bounty hunter herself and eventually Hex's lover. Tallulah eventually became pregnant by Hex. However the child, a girl, was killed before being born. (Jonah Hex vol. 2, #50).

Joshua Dazzleby is Jonah's half-brother and is introduced in the graphic novel Jonah Hex: No Way Back. (2010)

In most of his stories, Jonah Hex displays no supernatural or superhuman powers; however, he does possess some exceptional abilities, acquired through a combination of talent and training.

Despite being blind in his right eye, Hex is an outstanding marksman who rarely misses his target. He is extremely fast on the draw and can be seen in many stories gunning down multiple foes before any of them can get off a shot. He can wield two guns, one in each hand, with equal proficiency. He is also a resourceful combatant, often relying on stealth, tricks, and improvised weapons and traps to defeat enemies akin to fellow DC Comics character Deathstroke (who is also blind in his right eye). Hex was taught to shoot by the legendary gunslinger Windy Taylor. His reflexes are strong enough that he has proven to be faster on the draw than both Wild Bill Hickok and Batman. Hex became an expert at driving various motor vehicles during his time in the 21st Century.

In the DC Universe, he is known as having almost superhuman ability and marksmanship with 19th-century weapons, mostly revolvers. After Jonah Hex is transported to the future in Hex, he acquires a pair of Ruger Blackhawk .357 Magnums. He chooses these because they are single action revolvers like the ones he used in the Wild West, but he still manages to outshoot everybody armed with more modern weaponry.

Hex is an exceptional tracker, able to follow trails several days old through rain and mud in spite of his quarry's best efforts to cover their tracks. Hex often displays a keen danger sense which warns him of ambushes and traps. This is not a supernatural ability: it is simply an instinct honed through years of experience in battle and hunting dangerous foes. Hex is also extremely tough and has been known to continue fighting even after suffering torture or severe injury.

Jonah Hex has a reputation throughout the West as a ruthless and prolific killer, but like Batman, he is bound by a personal code of honor to protect and avenge the innocent. On many occasions, his reputation by itself has proven enough to deter potential foes. Knowing that the infamous Jonah Hex is pursuing them often unnerves Hex's targets so badly that they make fatal mistakes, such as wasting ammunition, falling into traps, or turning and engaging Hex in a desperate stand-off.

In Superman/Batman #16, when Batman & Superman have ended up being catapulted through various earths after a conflict with Darkseid, they ended up meeting Hex and other Western superheroes. While Superman was attending to Batman's wounds, Jonah ambushed him and manages to kill Superman using Kryptonite bullets, and blowing his brains out. Although Superman wasn't really killed, it was heavily implied because in that story arc, the only way for Superman and Batman to be transported to another dimension is for them to be killed.

Jonah Hex has, in many timelines, met and fought Batman. In Superman/Batman #16, Hex overpowered Batman in hand-to-hand combat (albeit Batman had been heavily wounded). In Batman: The Return of Bruce Wayne, Hex and Batman face off in a showdown. Even though being skilled in throwing batarangs and disarming gunmen, Batman was still outdrawn by Hex, and Hex shoots him in the stomach.

In the live-action movie, he was able to raise the dead and force them to speak truthfully, a power he never possessed in the comics. 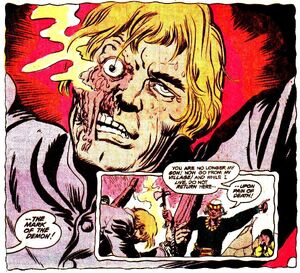 Jonah being branded with the Mark of the Demon by the Apache Tribe. 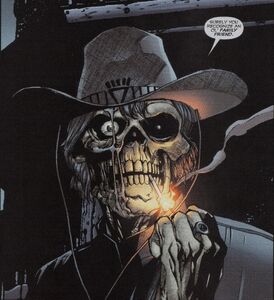 Jonah Hex as a Black Lantern. 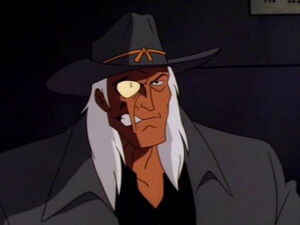 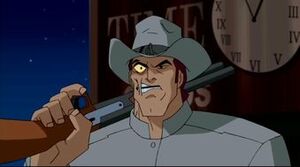 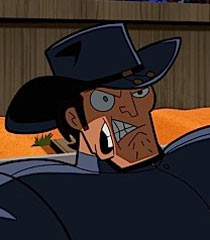 Jonah Hex appeared in Batman The Brave and the Bold 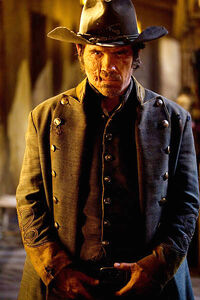 Jonah Hex appeared in a 2010 film played by Josh Brolin. 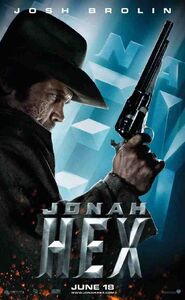 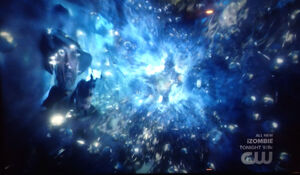 Jonah Hex appeared in The Flash played by Johnathon Schaech 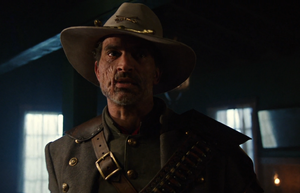 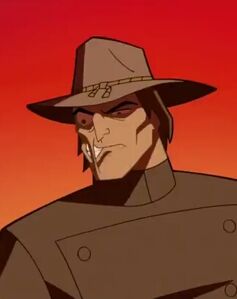