Heroes Wiki
Register
Don't have an account?
Sign In
Advertisement
in: Articles under construction, Article stubs, Superman Heroes,
and 22 more

Jonathan Kent, also known as Pa Kent, is a fictional character in DC comics and universe, and is adoptive father of Superman. Originally a rural farmer from Smallville, he and his wife, Martha Kent, discovered an infant Kal-El in his rocket, and decided to adopt him as their own son. Jonathan and Martha raised Clark, teaching him the importance of morality, humility, and compassion.

He was created by the late Jerry Siegel and the late Joe Shuster, and made his first apperrance in Superman #1 in June of 1939.

Jonathan Kent was born in the mid-1920s in the rural town of Smallville, Kansas to Sam Kent and a unnamed woman, and is the brother to Harry Kent. His mother died when he was young, and he helped his father and brother take care of the Kent Farm. During his youth, Jonathan met and fell in love with Martha Kent, who also liked him back, but the two never had the chance to start a romantic relationship. When he was old enough, Jonathan enlisted in the United States Armed Forces to fight against the Japanese in World War II.

Jonathan was later captured by Japanese forces in 1944, and was listed as missing in action until he was released. Upon returning home, Jonathan learned that his brother had died, and that Martha had married Daniel Fordman, a wealthy businessman. Though heartbroken, Jonathan respected Martha's decision, and was later greeted by Daniel in a private meeting, who reveled that he was dying of cancer. Fordman wanted Jonathan to take Martha away from him, so she wouldn't see him waste away from his disease, but Jonathan declined.

Fordman would later die from cancer, and Martha decided to leave the Fordman families' squabbles and his fortune that was left for her in his will. Jonathan and Martha began a relationship, and later married after the death of Jonathan's father. Jonathan inherited the Kent Farm and his father's passing, and he and his wife decided to move there, and take care of it. Jonathan and Martha later attempted to start a family, but Martha suffered from numerous miscarriages.

When Smallville suffered from the a terrible blizzard, the Kent's were driving down a highway when they discovered an alien ship that crash-landed. Inside the rocket was the infant Kal-El, who was saved from the destruction of his home planet by his parents, Jor-El and Lara-El. The two decided to take the infant into their home, and had to stay in the farm for six months due to the blizzard. Afterward, the two presented Kal-El to the community as their biological son, and named him Clark after Martha's surname.

Jonathan and Martha raised and loved Clark, and taught him to have a strong sense of justice, humility, and morality. Jonathan eventually realized that Clark had powers unlike everyone else, seeing him survive (and not having a mark on his body) nearly being trampled to death by a neighboring farmer's prized bull. When Clark was seventeen years old, Jonathan confessed to him that he was not his biological father, and showed him the rocket ship. Shortly thereafter, Clark left the family farm and traveled to Metropolis, and soon became a superhero known as Superman.

On Prime Earth, Clark and Martha were killed in a car accident on night of Clark's senior prom, but it was revealed in the Doomsday Cock that their death was caused by the actions of Doctor Manhattan. In the past, Doctor Manhattan caused the death of Alan Scott, thus preventing the formation of the Justice Society. Doctor Manhattan later undid this after being inspired by Superman's words, and realizing that Clark never became inspired to become a superhero as a kid, and undid his actions to allow Alan Scott and Kent's to be alive.

It was later revealed that Batman kept Jonathan and Martha in hiding, and Superman met with them after revealing to the world that he was Clark Kent. Upon meeting with them, they asked for the whereabouts of their grandson, Jonathan Samuel Kent. 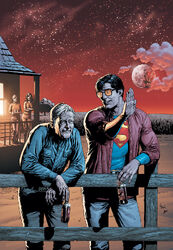 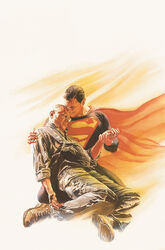 Jonathan being cradled by Clark. 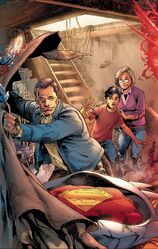 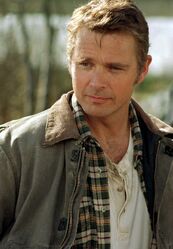 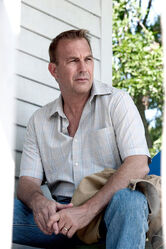 Kevin Costner as Jonathan Kent in Man of Steel.