Make sure the Kryptonians will survive through Kal-El and to guide him into a great path of becoming a hero for Earth and possibly the universe (all succeeded).

Jor-El is the secondary tritagonist appearing in the 2013 superhero film Man of Steel, based on the character of the same name appearing in DC Comics.

He is portrayed by Academy-Award winner Russell Crowe, who also portrayed Maximus Decimus Meridius in Gladiator, and Dr. Henry Jekyll in The Mummy (2017).

At the start of the movie, Jor-El helps his wife Lara Lor-Van give birth to a son they name "Kal-El." Kal-El, as it turns out, is the first Kryptonian to be naturally conceived and born in centuries against present Kryptonian law, which forbids natural reproduction (Kryptonians are instead genetically engineered in Genesis chambers).

Not long after, Jor-El meets with the planet's governing council and tries to persuade them that Krypton is doomed due to their people exhausting the planet's natural resources, rendering the core unstable. The session is interrupted by General Zod and his soldiers, who are staging a coup against what Zod sees as the corrupted and foolish leadership of the council. Jor-El confronts Zod and refuses to help him create a new Kryptonian order, prompting Zod to place Jor-El under arrest. Jor-El, however, manages to subdue his captors and escape. He then retrieves the Codex which contains the genetic code of every Kryptonian yet to be born.

Once he has the Codex, Jor-El escapes from Zod's forces who arrive to apprehend him and makes his way back home, where he and Lara prepare to send their newborn son to Earth. Before placing Kal-El into a spacecraft, Jor-El infuses the Codex into his son's cells.

When Zod and his men approach the citadel, Jor-El dons Kryptonian armor and arms himself to take on Zod. When Zod enters the citadel, Jor-El reveals that he and Lara had a son through natural means. Zod is outraged at the revelation, leading to a violent fight between the two former friends. Lara manages to launch Kal-El's capsule into space; not long after, Zod, in a fit of rage, stabs Jor-El, killing him.

Thirty-three years after Krypton's destruction, Kal-El, now named Clark Kent, finds and activates a Kryptonian scoutship that crash-landed on Earth centuries earlier, coming into contact with a hologram programmed with Jor-El's consciousness. Jor-El tells Clark about his heritage and Krypton's history, explaining that he sent Kal-El to Earth to bring hope to humankind before presenting Clark with a Kryptonian uniform.

Later, when Zod makes his way to Earth and begins terraforming the planet into a new Krypton, Jor-El confronts Zod aboard the scoutship and unsuccessfully tries to convince his old friend to stop his genocidal plan. Zod responds by eliminating Jor-El's programming from the ship's systems. 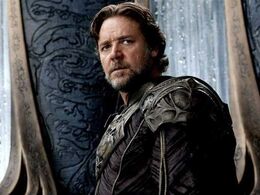 Jor-El seeing the destruction of Krypton.

Jor-El's death by Zod's hands.
Add a photo to this gallery

Retrieved from "https://hero.fandom.com/wiki/Jor-El_(DC_Extended_Universe)?oldid=2129919"
Community content is available under CC-BY-SA unless otherwise noted.