Comedy Live show Hero
Jorge Ortiz de Pinedo- Jorgito del Mazo Geis: he is the main character, usually comes late and gives him to be playing in class, is the most disrespectful with his teachers and classmates like for example, the teacher tells them jokes of bad taste to them or telling them all companions of Jorge together saying: The teacher is Burro or the teacher is mule, usually gives the "joke of auction" with which part of the sketch or program is finished. It is usual that after the teachers announced an activity, he responded with a "No"; when one of the teachers asked "No Que?" Jorgito replied, "No sé, usted es la maestra/el director"  In the last episode, he failed 3rd grade once again, while his classmates finally passed and moved up to 4th grade.

He returned in La Escuelita VIP, this time, with new classmates. 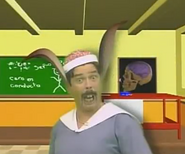 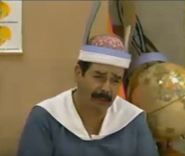 Add a photo to this gallery
Retrieved from "https://hero.fandom.com/wiki/Jorgito_del_Mazo_Geis_(Cero_en_conducta)?oldid=1568863"
Community content is available under CC-BY-SA unless otherwise noted.