Fighting.
Being with his friends.

Assist Alex Mason and Frank Woods in their missions (succeeded).

Stop the Soviets (posthumously succeeded by his allies).

He was a U.S. Navy officer, CIA agent, and Frank Woods' right-hand man. He appears in almost every mission played by Alex Mason up until Payback, in which he is killed by a Spetsnaz Operative, for resisting interrogation. His death is avenged by Mason and Woods when they escape and kill the Spetsnaz Operative, both declaring it was "For Bowman", and Mason manages to stop the Soviets from launching Nova 6 gas across the west.

He was voiced by and modeled by O'Shea Jackson (more famously known as American Hip-Hop artist/actor Ice Cube), who also portrayed Craig Jones in the Friday series and Captain Dickson in 21 Jump Street and 22 Jump Street.

Bowman was born on November 10, 1940 to a World War II veteran father and mother, with the former inspiring him to join the U.S. Navy at the age of 17. Bowman was also trained in the Underwater Demolition Team school, and later met and befriended U.S. Marines Alex Mason and Frank Woods.

Bowman's first appears in "Operation 40", a mission to assassinate Fidel Castro amidst the Bay of Pigs invasion. Alongside Mason, Woods, and their informant Carlos, they escape the Cuban police and make it to Castro's compound. After Woods and Mason kill Castro (later revealed to be Castro's double), Bowman and crew escape via plane. Mason stays behind and uses a ZPU to let them escape, but is captured by Nikita Dragovich and sent to a Russian labor camp called Vorkuta.

Years later, Bowman later fought alongside Mason and Woods when assigned to stop a missile launch by former Nazi scientist in Baikonur. The mission was successful despite their ally Grigori Weaver being captured and losing an eye, but the team assumed they killed Dragovich in his limo, but he survived. In 1968, Bowman would join the team SOG lead by Woods and Mason after they battled in Khe Sanh and fought in the Tet Offensive in Hue City.

Bowman would later take part in the clean and sweep operation in Viet Cong, and was later captured by Dragovich, Kravchenko, and given to the Viet Cong. According to Mason, Bowman began sobbing amidst their capture, implying he had given up (something Mason states that he doesn't blame him). Mason meets Bowman when they are told to play Russian Roulette by the Spetsnaz Operative, but the latter instead angers the operative and is killed by him. Mason is angered by his death, and later Woods states that their gonna make them pay, doing so by escaping and killing the operative.

Bowman is mentioned through the story by the interrogators (later revealed to be Hudson and Weaver) about Mason's pass operations that connect with Dragovich and Kravchenko.

Though Bowman won't appear in Call of Duty: Black Ops Cold War, it's been revealed however that he has a son named William Bowman whom had with a woman named Angela (currently unknown if she was Joseph's wife or lover), who appears in the "Pawn Takes Pawn" clips. William appears to want to learn more about his father and who killed him, and proceeds to kidnap Bruce Harris to gain more information. Harris reveals that he knew his father and his mother, and gives him a bag that contains Joseph's belongings. 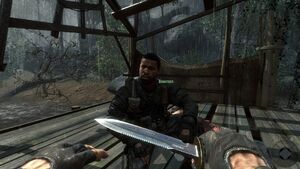 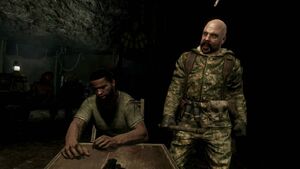 Bowman being interrogated by Spetsnaz Operative. 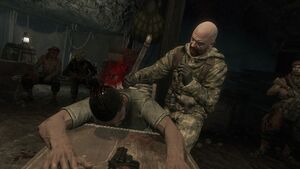 Bowman's death by the Spetsnaz Operative. 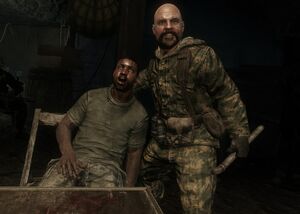