First mate of the Black Pearl

Joshamee Gibbs is a major character of the Pirates of the Caribbean series. He is a skillful sailor who navigated his way through many deadly situations. He is played by Kevin R. McNally. Like Jack and many other pirates, he's very fond of rum, and it's hinted that his alcoholism is one of the reasons he resigned from his former position of a Royal Navy sailor. He's Jack's best friend.

Gibbs was once a member of Great Britain's royal navy, during which his friend, the infamous pirate Edward Teague and his son Jack, were both arrested by the navy. However, Gibbs, being a friend of Edward Teague, helped him and Jack from the cells and kept the supply of rum he received from them.

At some point, Gibbs became part of the crew of HMS Dauntless, under the command of Lieutenant James Norrington and joined Norrington, Weatherby Swann and Swann's daughter Elizabeth, on the voyage to the Caribbean from England. Along the way they encountered a destroyed ship, whose only survivor was a boy named Will Turner, who was brought aboard the Dauntless, then when Gibbs heard Elizabeth sing a pirate's song, he discouraged her from continuing to sing because he was against piracy at the time. However, in the last eight years, at some point Gibbs deserted the navy and decided to become a pirate himself and he became aware about how Jack lost his ship, the Black Pearl, in a mutiny led by his first mate Hector Barbossa.

The Curse of the Black Pearl

Gibbs is first seen sleeping with pigs. Jack wakes him up by throwing a bucket of water on him, and the superstitious Gibbs is initially scared because "waking a man that sleeps is bad luck", but Jack says he knows how to break the bad luck by offering to buy him a drink, Gibbs accepts. Jack tells Gibbs his plan for getting the Black Pearl back: he will trick Barbossa, making him believe he will tell him the true identity of Bootstrap Bill Turner's son, but will maroon Barbossa on a desert island and escape with his beloved ship. Gibbs loves the plan, but Will believes Jack wants to betray him (which is not true).

Jack, Will and Gibbs recruit a crew on Tortuga and sail with the stolen ship. Gibbs reveals to Will that Jack was the captain of the Black Pearl once, but Barbossa (who was his first mate) mutinied and left Jack on a desert island with only a gun with one shot for suicide before dying from hunger, but Jack escaped from that island and wants to kill Barbossa for revenge with the one shot, which he's conserved for ten years. However, when Will asks him how Jack escaped from that island, Gibbs comically lies and tells to him that Jack bounded a couple of sea turtles to make a boat and bounded them with his hair. Gibbs helps Jack and Will to arrive to Isla DeMuerta and he waits on their ship for the moment when they come back. However, during the battle Gibbs betrays Jack and steals the Black Pearl, leaving Jack on Isla DeMuerta where Jack, despite having saved Port Royal, is unfairly arrested by James Norrington and unluckily condemned to a neck loop.

However, Gibbs sincerely regrets having abandoned his best friend and decides, alongside the rest of the crew they assembled, to save Jack from the execution in Port Royal. Meanwhile, Jack escapes alive from the execution with the help of the redeemed Will Turner, and then Jack falls in the sea, but survives the fall and re-emerges on the surface. Jack begins to swim away, but at that moment, Gibbs arrives with the Black Pearl and rescues Jack, taking him on the board of the Black Pearl with the help of the crew. After Jack has arrived on board of the ship, Gibbs apologizes to him and the two go back to being best friends. At that wonderful moment, Jack goes back to being the captain of the Black Pearl and Gibbs becomes his loyal first mate.

Gibbs reunites with Jack after the captain finds his pistol. However, Gibbs and the crew are disturbed by them having not doing piracy acts for much time, to which Jack tells them that he must find a key, which he has a drawing of. Gibbs asks Jack what the key opens, but Jack refuses to reveal that to him and answers with strange puns and confusing speeches, leaving Gibbs confused. At night, Jack comes back from the basements of the Black Pearl and is very scared and nervous and can't even can give orders to his crew, but Gibbs and the crew decide to sail in secure waters.

However, Jack and Gibbs end up on Palestegois's Island along the Black Pearl and the crew, where cannibals capture them; They adore and love Jack as they believe he is a God trapped in his human body and they want to "free" him from his "prison of meat" by eating him alive. They eat most members of the crew and the survivors, Gibbs, Marty, Leech, Mr. Cotton, Cotton's parrot and other members of the crew are trapped by the cannibals in a cage made with the bones of the deceased members of the crew. Later, Will Turner, who was searching for Jack for unknown reasons, is imprisoned in the cage as well. Gibbs explain to Will that Jack can't save him because he is a prisoner like them because he was forced by the cannibals to prison his friends, but plots of escaping and make the survivors stay in that cage because so he can take time and meanwhile they can escape. Gibbs, Will and the crew escape from the cage, while Leech and everyone in his cage end up dying after having tried to stage a mutiny due to falling to their deaths.

Jack also escapes from the cannibals, who chase him onto the beach, but Gibbs escapes with Jack and all the survivors of the crew, and at that point, they sail to Tia Dalma's house to get information from the soothsayer about the evil monster-pirate Davy Jones and how they can use the Dead Man's Chest to defeat him and set Jack free from his deal and the horrible fate that Jones wants to condemn him to.

They discover that inside that chest is Davy Jones's heart, and if they stab the heart, they kill Jones. Jack has a plan: He will pretend to give Will and 100 souls to Davy Jones, tricking him, but in reality, after having recruited his crew and having killed Jones by stabbing the heart, he will free Will and they will go back to their respective lives.

In the plan, Jack and Gibbs recruit a crew in Tortuga, and there they recruit the dishonorable James Norrington and Elizabeth Swann. During the travel, Gibbs and Jack discover that Will was working for Lord Cutler Beckett, an old hated enemy of Jack and his former boss, and on that point, Jack discovers that and believe that Will is only a coward and a traitor, so he decides to leave him to Jones as punishment for his betrayal, but also because if Will comes back he will try to steal his magical compass and give it to Beckett, who will use that for killing them all, However, they are pressured to save him by Elizabeth, who pleads with them to do so.

On Isla De Cruces, they find the chest, but the vengeful and treacherous Will arrives and James Norrington betrays them. Jack manages to get the heart during the ensuing three-way battle, put it in a jar of dirt and make it back to the crew, and Gibbs is happy that they have found the heart, but when Jones arrives when Jack and Gibbs try to act out their plan, the jar of dirt falls and the two discover that Norrington stole the heart from the jar sometime beforehand.

Gibbs and Jack fight the Kraken, but at the end, they are forced to leave the ship to the Kraken, but the treacherous Elizabeth bound Jack to the ship, who was captured by the Kraken and taken along with the Black Pearl to Davy Jones's Locker.

Gibbs and the others save Jack from Davy Jones's Locker and help him to get back in the real world along with the Black Pearl. Gibbs helps Jack during the war against Davy Jones and Lord Cutler Beckett, who wants to kill them all. They also discover the betrayal of Will. In the battle, Gibbs and Jack, after having killed Davy Jones, destroy the Endeavor and kill Lord Beckett, and Gibbs parties with Jack over their victory. 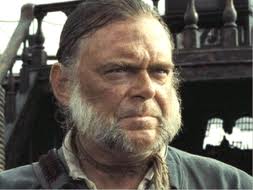 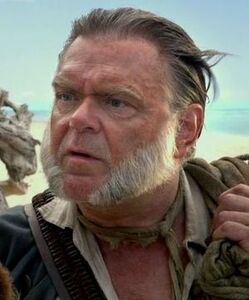 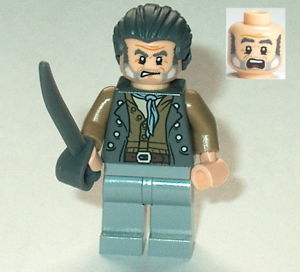 Gibbs as a Lego figure 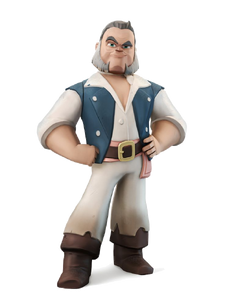 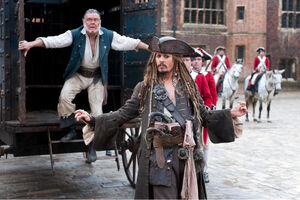