Josie is portrayed by Nina Dobrev, who also portrays both Elena Gilbert and Katherine Pierce in The Vampire Diaries. 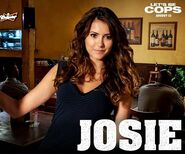 Josie with her clever masterpiece.
Add a photo to this gallery
Retrieved from "https://hero.fandom.com/wiki/Josie?oldid=1926052"
Community content is available under CC-BY-SA unless otherwise noted.