To collect and harvest the Rokakaka fruit

Josuke is a young man afflicted by retrograde amnesia, lacking any memories prior to being discovered by Yasuho Hirose near the Wall Eyes in Morioh Town. According to Karera Sakunami, Josuke's true identity is Josefumi Kujo (空条 仗世文 Kūjō Josefumi), and became his current self after fusing with the man Yoshikage Kira (吉良 吉影 Kira Yoshikage).

Josuke is a young, handsome and physically fit man of above-average height.

He wears a tasseled "Dixie cup" sailor cap (in multiple illustrations, it is adorned with the same palm as Jotaro Kujo's hat). He wears a sailor suit, cut with a wide neck and above the navel, a neckerchief with a button resembling a slotted screw head, large emblems of an anchor on his right side and a compass rose on his left, fitted pants with a belt, and a pair of high-top athletic shoes.

Josuke has a diastema between his upper incisors, a star-shaped birthmark on his left shoulder. He has two sets of irises, four testicles and two tongues, all joined as one, differing in texture and color. 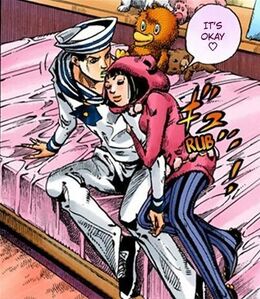 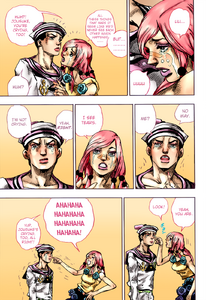 Retrieved from "https://hero.fandom.com/wiki/Josuke_Higashikata_(JoJolion)?oldid=1518586"
Community content is available under CC-BY-SA unless otherwise noted.