Having group hugs, bouncing around, being positive, listening to music, dancing, having fun, watching horror films, going to Goofball Island and grossing out Disgust

To keep Riley happy all day long, also functioning, and return to Headquarters (all succeeded)

Joy is the main protagonist, heroine, and narrator of the 2015 Pixar film, Inside Out. She is the yellow emotion and one of the five emotions inside the mind of Riley Andersen. As her name implies, she is eternally optimistic and appears to be happy all the time and thus could be the leader or enthusiast of the group, hence her name. She can sometimes be miserable about the important memories in Riley's mind, though.

She is voiced by Amy Poehler who also did the voice of Bessie Higgenbottom from The Mighty B.

Joy was the first emotion introduced inside Riley's mind during her childhood. When Riley grew up, she and the other emotions (Sadness, Disgust, Anger and Fear) have a gallery of orbs to use as memories. Eventually, she and the other emotions disagree on which emotion's turn it is to to control Riley. When the inner core lost all of Riley's memories, Joy and Sadness get out of the headquarters and land in a vast area.

Joy is also very insistent on keeping Sadness from touching the most important orbs Riley has in her memory. When Family Island crumbles, she, along with Bing Bong, fall into the memory dump. Joy ends up releasing her stress on Riley's most important memory orbs, but Bing Bong encourages her to not give up on hope. The two of them search for his wagon which had fallen into the dump earlier and use it to return to the surface of the mind. After two failed attempts, Joy manages to succeed in reaching the surface after Bing Bong sacrifices himself to lighten the weight of the wagon so that it manages to return to the surface. As Bing Bong fades away (dies), Joy uses the remains of Imagination Land and brings Sadness as well as the core memories back to the inner core in the headquarters after reaching it. Joy was supposed to save the day, but it was Sadness instead.

With Riley is back home at San Francisco, Joy and Sadness began creating a new Family Island. When Riley adapts for a new life, Joy and the other emotions begin to work together on coping with her new environment. 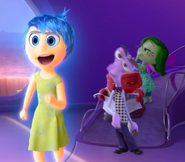 Joy with Fear and Disgust

Joy as she appears in Disney Infinity 3.0

Joy with a memory orb in Disney Infinity 3.0
Add a photo to this gallery

Retrieved from "https://hero.fandom.com/wiki/Joy_(Inside_Out)?oldid=838381"
Community content is available under CC-BY-SA unless otherwise noted.