Jubei Yagyu Mitsuyoshi is the female protagonist of the series and Muneakira's first Master Samurai, with the contractual mark on her chest. She also has a power level of five million when she transforms, but in this state she has shown a sadistic side, yet she is an honorable warrior who gives respect to those whom have earned it.

She was voiced by Aoi Yuuki in the Japanese and Emily Neves in English.

Jubei is a red-haired girl, with blue eyes in her "normal form". In her master samurai mode, her eyes color changes to gold, and her pupil form changes to a dragon-like form.

Jubei's normal personality is a child-like personality, which she demonstrate by giving people nicknames and calling Muneakira by big brother (onii-chan). In her master samurai mode, Jubei shows a sadistic, however, she is still an honorable warrior who gives respect to those whom have earned it.

The power of Jubei in her samurai mode is 5000000. She is incredibly fast and strong and her swordsman skills are on the highest level. She controls an black aura around herself to attack.

She fights with a two katanas, one being black and red and able to detach into smaller blades. She can transform, (by kissing her contractor Muneakira) and become far much stronger than her regular state. 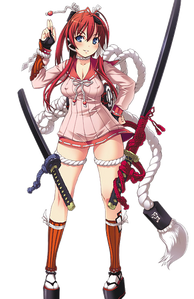 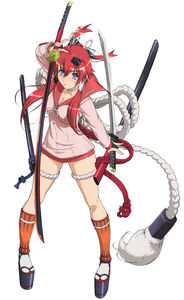 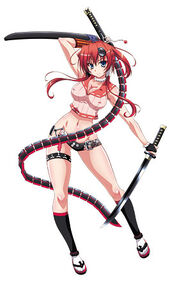