In Samurai Shodown V, Jubei teaches the Tokugawa clan swordsmanship, and Yoshitora Tokugawa is his last disciple. After Yoshitora's father (indicating Tokugawa Ieharu) death, he went through to find the arrears heirs. At Samurai Shodown, he can decide to become a ronin (a lordless samurai), abandon the strict and regulated life of the dojo and the Japanese aristocracy, and pursue personal enlightenment. Throughout the series, Jubei was hired by the shogunate to kill demons and other threats that might wander around Japan.

His role in Shinsetsu Samurai Spirits: Bushoudou Retsuden is a feeling for his own dojo and the agent of the then bakufu (the Japanese government). When he asked the party to continue his investigation, because he must teach the Lord's sons swordsmanship. In the second chapter, he let us suffer a fatal blow from A servant of Mizuki Rashojin, whose spirit was sucked into an evil bell.

Jubei is also the protagonist of Yagyu Kachou, an official story. In another reality, the Samurai Shodown characters are placed in the modern world. In this story, he is a struggling salary man (standard Japanese businessman), he is already in trouble. He is often selected by various roles in the series, although Hanzo and Tam Tam are his closest friends.

He is a hardened and experienced warrior who is loyal to the Tokugawa shogunate even as a ronin. He can also likes to see potential in younger warriors and encourages them to one day overcome him. Unlike his comrade in arms, Hanzo, Jubei is a more care-free man when off duty who enjoys times of peace with a hearty laugh. 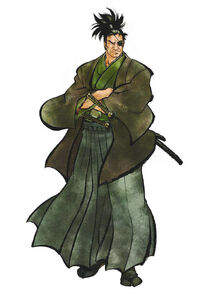 Retrieved from "https://hero.fandom.com/wiki/Jubei_Yagyu_(Samurai_Shodown)?oldid=2194288"
Community content is available under CC-BY-SA unless otherwise noted.