Judge of Mega-City One

To protect and rid Mega-City One of crime

Judge Dredd is the titular anti-heroic main protagonist from the sci-fi comic of the same name as well as a number of spin-off merchandise (including two live-action movies, where his character was altered heavily in the first one). He is a futuristic cop with the authority of judge, jury and executioner, trying to restore order and justice to crime-ridden, overcrowded Mega City One.

Judge Dredd is traditionally portrayed as a character that can either be seen as an extreme example of an anti-hero or a full-fledged protagonist villain depending on both the specific story and the reader's own moral views. Dredd and his fellow Judges rule over a dystopic future in which he and fellow "Judges" deal out instant justice to innumerable criminals, malcontents and monsters. While they do represent order and keep Mega City One from descending even further into chaos than it already has, the Judges are also text-book fascists and as such can and do indulge in ethically sketchy behavior now and again.

Judge Dredd is known to hold the law dear and will never bend the rules for anyone, however he does value innocent lives - in fact he will fight viciously against those who seek to harm the innocent (if only because one of the central rules of being a Judge is to safeguard the "innocent").

This doesn't mean Dredd is an easy character to get along with, he is easily considered just as anti-heroic as characters such as the Punisher or Spawn but in the end (much like both Punisher and Spawn) he fights on the side of good, or perhaps more accurately order. Indeed it is important to note that Dredd is traditionally depicted as fighting on the side of Law and not "Good" - making him a questionable hero but popular nevertheless.

Dredd appeared in appear in the 1995 with same name. He was portrayed by Sylvester Stallone, who also played Rocky Balboa, John Rambo, and Barney Ross.

In the 3rd millennium, much of Earth has become an uninhabitable wasteland. The majority of humanity resides in huge Mega-Cities, where the traditional justice system has been replaced by a corps of Judges whose role combines those of police officer, judge, jury, and executioner. The most dedicated "Street Judge" in Mega-City One is Joseph Dredd (Sylvester Stallone), who assists Judge Hershey (Diane Lane) in ending a block war. Herman Ferguson (Rob Schneider), a hacker recently released from prison, is caught in the firefight and hides inside a food dispensing robot, only to be arrested by Dredd and sentenced to five years' imprisonment for tampering with city property.

Rico (Armand Assante), a former Judge turned psychopathic murderer, escapes from prison and reclaims his Judge's uniform and "Lawgiver" gun as well as a decommissioned combat robot. A news reporter (Mitch Ryan) critical of Dredd is soon murdered, and Dredd is the chief suspect. Hershey acts as Dredd's defense lawyer in a trial before a tribunal of Council Judges including Dredd's mentor Chief Judge Fargo (Max von Sydow) and Judge Griffin (Jürgen Prochnow). Dredd is found guilty based on DNA evidence: The Lawgiver encodes the DNA of the wielder onto each round fired, and the DNA from the murder weapon matches Dredd's. Fargo steps down as Chief Judge, asking as his last request that the Council spare Dredd's life. Dredd is sentenced to life imprisonment while Fargo embarks on his "long walk", a tradition in which a retiring Judge ventures into the "Cursed Earth" wasteland "to bring law to the lawless". Griffin, who freed Rico and had him frame Dredd for the murder, succeeds Fargo as Chief Judge and instructs Rico to sow chaos throughout the city.

Dredd finds himself seated next to Herman Ferguson on a transport ship to the Aspen penal colony. While passing over the Cursed Earth the ship is shot down by the Angel Gang, a family of cannibalistic scavengers who capture Dredd and Herman. A squad of Judges tracks Dredd to the Angels' camp and a battle ensues. Fargo arrives just in time to save Dredd's life, but is mortally wounded by Mean Machine Angel (Chris Adamson). Before dying, he saw the Blind Lady and he tells Dredd that she was justice before the Judges was created. He tells Dredd that he and the Judges should never had taken justice out of her hands and created more chaos. Fargo reveals the secrets of Dredd's past: Dredd is the result of the Janus project, an experiment in genetic engineering intended to create the perfect Judge. DNA from the Council Judges was combined to create two clones, Dredd and Rico. Both were given artificial memories of childhood, and they became close friends.

However, while Dredd became the ideal Judge that the Council hoped for, Rico's personality twisted and he instead became the perfect criminal. Dredd was forced to judge Rico for murdering civilians, but instead of being executed Rico was sent to Aspen by Griffin. Since he and Rico share the same DNA, Dredd deduces that Rico framed him for the reporter's murder. Fargo concludes that Griffin is trying to reactivate the Janus project, and begs Dredd to stop him. Dredd looks up to the Blind Lady and he vows to bring justice by stopping Rico.

Back in Mega-City One, Rico creates panic by assassinating 108 Judges in two days. Griffin uses this to convince the Council Judges to unlock the Janus files, but when they refuse to reactivate the program he has Rico kill them. Arriving immediately after this, Dredd and Herman are accused by Griffin of murdering the Council. They evade the Judges and seek help from Hershey, who has been investigating Dredd's past. Dredd tells her about the Janus project, and the trio head to the Janus laboratory at the Statue of Liberty.

Rico betrays Griffin, having the robot kill him, and replaces the DNA for the Janus clones with his own. Herman uses his hacking skills to save Dredd and Hershey from the robot. Rico orders his clones activated prematurely, but they are incomplete and unable to stop Dredd. Dredd pursues Rico to the top of the statue, and after a final struggle sends Rico falling to his death. Central, the city's controlling supercomputer, has recorded the entire event and broadcasts the information, clearing Dredd's name. The remaining Judges ask him to become the new Chief Judge, but Dredd passes the title over to Hershey, preferring to remain a Street Judge.

Dredd is a famed and feared Judge. Producer Allon Reich described Dredd as "an extreme character, and he administers justice with an extreme lack of prejudice". Urban approached the producers about joining the film. He found the role challenging because the character never removes his helmet, requiring Urban to convey emotion without using his eyes. He viewed the character as an average man with an insanely tough job in a fragmenting society and likened Dredd's heroism to that of a fireman.

In a way, Dredd personifies the ends justifying the means. The role also demanded physical preparation; Urban undertook intensive physical training to become a "beast of a man". He also underwent weapons and technical training to learn how to operate under fire, how to arrest criminals and breach doors. He insisted on performing his own motorcycle stunts for the film. He played Dredd with a raspy and harsh vocal tone akin to "a saw cutting through bone", which he found difficult to sustain. 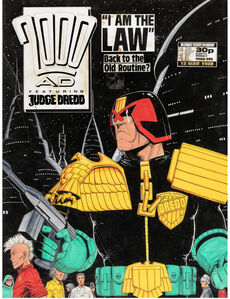