Leader of the zombies

Have Aggie Prenderghast executed.
Have the curse upon the town of Blithe Hollow stopped (both succeeded).

Judge Hopkins is the overaching antagonist of Laika's second full-length animated feature film ParaNorman. He is a former judge and the leader of a group of zombies who was actually responsible for the entire film's plot events, but he lives in regret for wrongfully sentencing Aggie Prenderghast to her death for the alleged crime of witchcraft in his mortal life. Despite having committed many villainous acts, he does feel remorse and does everything in his power to atone for the sins he had committed.

He was voiced by Bernard Hill.

Judge Hopkins was one of the original townspeople in Blithe Hollow. In the original settlement, there lived a girl named Agatha "Aggie" Prenderghast, who had the ability to talk to the dead. Having been brought up as Puritans, Hopkins and everyone else was afraid of her, believing that she was practicing witchcraft that she gained by making a deal with the Devil. They took her from her mother and sentenced her to hang. Angry at everyone's intolerance, Aggie unleashes her apparently hidden powers, swearing to make them suffer.

After their deaths, Hopkins and the other Puritans that condemned Aggie realized their mistakes and spent the next 300 years in guilt and regret. Aggie's curse was that they would rise from the dead as zombies and suffer like she suffered. The curse was prolonged because members of Aggie's family would read her fairy tales to keep her spirit asleep.

300 years later, when Norman Babcock, not understanding the whole story, fails to read the fairy tales to Aggie because he was distracted by a bully named Alvin. Aggie's angry spirit and the zombies began to rise, Alvin and Norman make a run for it, eventually catching up to Norman's sister, Courtney, his best friend, Neil, and Neil's older brother, Mitch. Mitch accidentally runs over one of the zombies and the kids make a hasty drive to get away from them. Judge Hopkins tries to personally climb aboard Mitch's van but Mitch floors it, leaving Hopkins hanging from the back, struggling to reach for Norman.

Hopkins and the other zombies move on into the town, where they are confused and terrified of the modern world around them. The people of Blithe Hollow think they are being attacked, create an angry mob, and try to fight the zombies, even through the storm Aggie personifies herself as causes more damage. Eventually, Norman and his friends look into the town hall, looking for Aggie's records, to no avail. Eventually, Norman is knocked unconscious when Aggie's storm strikes the building.

Norman has a magic-induced flashback of Aggie's trial, he eventually wakes up surrounded by the zombies. The Judge (who apparently is the only one who can talk to Norman) walks up to him, but Norman shouts at him, calling him out for what they did to Aggie. The guilt-ridden Judge admits his fears got the better of them and they do deserve their fate but are trying to make up for what they did, no matter how unforgivable it may be. Hopkins tells Norman the curse is their punishment and he must help the zombies.

Hopkins and the other zombies offer to take Norman to Aggie's grave so he can personally reach out to her, but they are cornered by the angry mob, who threaten to lynch Norman for being "in league" with the zombies, but Norman's friends, who realize how important Norman's goal is, calls them out on it. Norman's family decides to drive him to Aggie's grave, with Hopkins joining in to guide them (leading to a very awkward car drive) and the other zombies stay behind.

Around the end of the film, after Norman reaches out to Aggie and she goes back to sleep, Hopkins and the other zombies begin to crumble to dust and their spirits fade away, this time everyone else could see them as they move on. The Judge disappears in front of Norman's family with a sad and regretful look on his face, though he is grateful towards Norman for ending the curse for good. It's not clear if they go to Heaven or Hell when they moved on. Judging from the fact he and the rest of the zombie regret and show remorse for this misdeeds, they most likely are allowed to rest in peace rather than suffering eternal damnation.

In the flashbacks, Judge Hopkins appeared to be an authoritarian and abusive control freak with absolutely no empathy towards Aggie and her mother. Like most inquisitors from the period, he believed to do good and considered Aggie and her mother as freaks. However, he did not order their deaths by pure sadism but rather out of genuine fear of their powers. Once dead, Hopkins spent the next centuries in regrets and wished everything to be forgiven for what he has done. 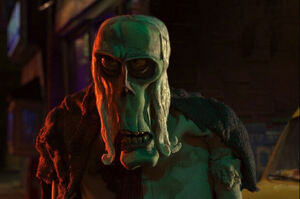 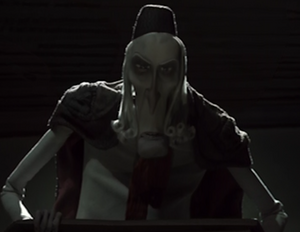