Judge Peckinpah
Your Honor (by Red)

Help Red get the eggs back (succeeded)

The Honourable Judge Peckinpah is character in The Angry Birds Movie. He is an owl who is standing on another bird name Cyrus to hide his true size.

He is voiced by Keegan-Michael Key, who also played Ducky in Toy Story 4, Murray in Hotel Transylvania, Dave in The Star and Kamari in the 2019 remake of The Lion King.

In Japanese dub from the movie he was voiced by Jin Urayama who also voiced Anger in Inside Out and Doc Hudson in Cars.

Judge Peckinpah is an extremely arrogant, biased, pompous, and unjust judge who loves the sound of his own voice, holding court even when he's not actually in court and sending birds to the anger management classes at the Infinity Acceptance Group (Matilda's House). He can be seen strutting around Bird Island like he owns the place. He is so small that underneath his robes, he stands on the shoulders another bird, Cyrus. But every bird knows the truth, so he's not fooling any of the citizens. He only believes he's the one with a higher calling one that requires a higher perch on Cyrus' shoulders. He is the first bad. But in the end, he reformed and helped Red get the eggs back. 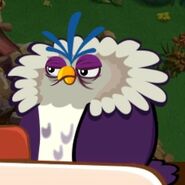 The citizens, including Judge Peckinpah, realizing how naïve they were and that not listening to Red was a tragic mistake, making them feel guilty for it after learning that Leonard and his minion pigs took out their village and stole their eggs.