Maintain peace and security amongst the students of Academy City, Assist and prevent corruption in Anti-Skill, Arrest and detain criminals and rogue/corrupt espers

Judgment (風紀委員ジャッジメント Fūki I'in (Jajjimento), lit. "Public Morals Committee Member") is a student-based polic agency that appears in A Certain Magical Index and is the main protagonist faction of A Certain Scientific Railgun. It is a police agency comprised entirely of students and is created for the soul purpose of maintaining peace and security amongst the schools and students of Academy City.

Judgment's main goal is to monitor the carious schools of Academy City and catch various delinquents and rogue espers who often abuse their powers and harm others. Since over 80% of Academy City's population is made up of students, Members of Judgement are also students and they will arrest criminals (whether they are kids or adults) and have them ready for Anti-Skill to take into custody. The overall role of a Judgment Officer is to be a civilian patrol officer and is go around the city keeping it and its citizens safe from crime. If a situation breaks out where Judgment can't interfere in, they will hand it over to Anti-Skill and the rest of Academy City's Security Forces. Judgement Officers are often limited to their specific school districts but they can contact branches in other districts in case of emergency. Other duties include helping lost children/citizens, cleaning up in case cleaning bots are offline, and monitoring Anti-Skill and vise-versa to prevent corruption amongst the organizations.

Members of Judgment are demanded by law to be students of Academy City in order to join however, it appears that they can be from any age as even elementary age students are seen to be members of Judgement. In order to become an official member of Judgment, a person must sign 9 contracts and go through 13 tryouts for over 4 months at the Judgement Training Center before becoming a member and once that is done, the person is then assigned the position as a Judgement Officer. Younger Judgment Members are often partnered up with older Judgement members and once an officer reaches a certain age, they can either patrol alone or form other partners within the same branch. Large groups can be formed in case of a large-scale operation. There are about 177 known branches with a chief to lead each of them. So far, only the 177th Branch Office has been seen however, Nayta Kihara is from the 49th Branch Office

Judgment members are given the needed resources to tackle crime from within their school districts. Common resources include handcuffs to arrest criminals so Anti-Skill can detain them along with riot gear including helmets and shields and flareguns to have nearby citizens evacuate in case of emergency. Each Judgement member has their own unique esper abilities depending on their power level and they can use them to stop criminals across the city. All members are to wear the green Judgment armband with green and white stripes and a sheild during operations but must hide them when their off duty to not draw attention to themselves. 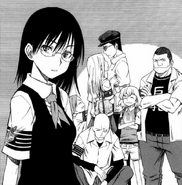 Mii Konori with other Judgment Members

Retrieved from "https://hero.fandom.com/wiki/Judgment?oldid=1612745"
Community content is available under CC-BY-SA unless otherwise noted.