Young Judy's parents are rather hesitant of her dream of being a cop instead of a carrot farmer—especially since NO rabbit has EVER been accepted to the police force.

Judy's parents nervously but willingly wish her the best of luck.

Judy on the train to Zootopia and on the very next step of making her dream come true.

Judy relaxes in her new apartment

Judy all suited up!

"Ready to make the world a better place?"

Judy demoted to being a meter-maid...and her vehicle isn't the fastest either.

"Don't worry! Officer Judy Hopps is on the case!"

Judy being scolded by Chief Bogo for leaving her post—despite the fact that she stopped a crook.

Judy promises Mrs. Otterton that she will find her missing husband Emmet.

Judy convincing a reluctant Nick to help her solve the Otterton case.

"Can we PLEASE just focus on this task?! We're in a really big hurry!"

Nick explains to Judy his tragic past of being rejected by the young scout troop just because he was a fox and the only predator.

"Actually, it's your word against yours. It's called a hustle, sweetheart. BOOM!" Judy and Nick exposing Bellwether.

Judy with her new partner Nick 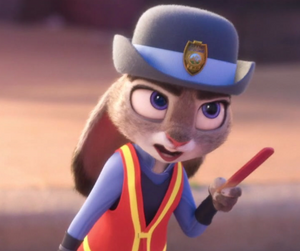 "You're gonna wanna refrain from calling me 'Carrots.'" 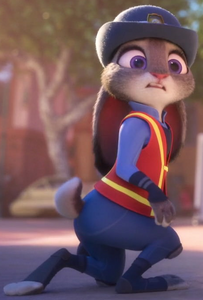 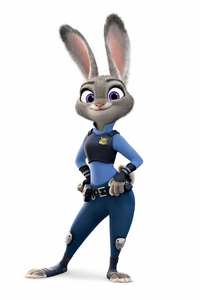 Add a photo to this gallery
Retrieved from "https://hero.fandom.com/wiki/Judy_Hopps/Gallery?oldid=1657245"
Community content is available under CC-BY-SA unless otherwise noted.