Find a boy whom she plans to marry one day and very loyal to her family and help them.

Judith "Judy" Angela Jetson is a fictional character in the futuristic Hanna-Barbara cartoon series The Jetsons. She is the very beautiful sixteen-year-old daughter of George and Jane Jetson who acts just like a normal teenage girl only with more futuristic tastes. Judy Jetson is the girl next door and more like the Audrey Hepburn of Orbit City.

Despite Judy still keeping modern-day "teenage girl" likes and dislikes, such as seemingly never-ending conversations on the telephone and shopping for futuristic outfits, she does not live exactly like a modern teenager, obviously because of the time the show takes place, because she enjoys taking advantage of the many gadgets at her grasp because of the technology (like controllable zero-gravity switches made for accomplishing popular dance moves of the show's time or for other uses). She also gives a summary of how her day went including her problems to a floating robotic diary, appropriately named, "DiDi" (voiced by Brenda Vaccaro).

Judy is also very fond of a futuristic rock singer named "Jet Screamer", whom George at first despised until Judy won a date with the heartthrob singer in a contest in which girls who wanted to win a date with Jet Screamer were to write songs, and the writer of the winning song would win the date. Judy won because George replaced her original song with her little brother Elroy's secret code. George came along to try to stop the date but failed and wound up as the drummer for the song and soon took a liking for Jet Screamer and his music.

Judy is depicted wearing a deep pinkish-purple, futuristic outfit and, like a few other Hanna-Barbara cartoon characters (such as Bamm-Bamm Rubble from The Flintstones and some background characters in various cartoons) has white hair that is colored to resemble platinum blonde or bleached blonde hair, which she wears in a ponytail on top of her head.

In Rockin with Judy Jetson, she is the main protagonist who wrote a song for Sky Rocker. She plays guitar in the band with Iona and Starr. 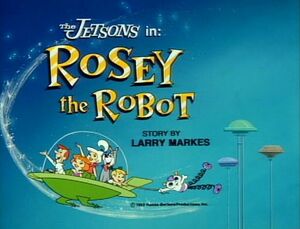 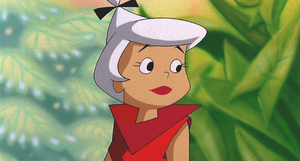 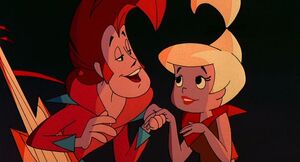 Judy with Cosmic Cosmo in Jetsons: The Movie 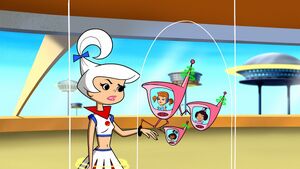 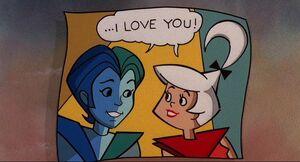 Retrieved from "https://hero.fandom.com/wiki/Judy_Jetson?oldid=1635860"
Community content is available under CC-BY-SA unless otherwise noted.