Writing novels
Spending time with his friends
Helping his family

Forsythe Pendleton Jones III (known primarily as Jughead Jones) (b. October 2, 2001) is one of the main protagonists of the CW/Netflix series, Riverdale. He is a loner and a heartthrob who is extremely intelligent, and often investigates crimes when they occur in Riverdale despite not being an official investigator, as well as being only 16 years old.

Jughead is the narrator of the series and is writing a novel about Jason Blossom's mysterious death.

He is portrayed by Cole Sprouse as a teen and Jack Moore as young Jones. Sprouse also played Cody Martin in the Suit Life series, and played FP as a teenager in the series.

Jughead grew up in poverty, as he lived in the Southside, with his father FP Jones being the leader of a group known as the Southside Serpents. Following Jason Blossom's murder, he wrote a book and began investigating it. During this, he fell into a romantic relationship with Betty Cooper, and they began solving the mystery alongside their friends, Archie and Veronica.

Jughead was a sophomore at Riverdale High School, but following the arrest of his father FP Jones, the leader of the Southside Serpents, he was placed into foster care and, as a result, had to transfer to Southside High. While attending the gang and drug infested high school, he re-opened the school newspaper, the Red and Black, where he is an editor, alongside new recruit, Toni Topaz, the newspaper's photographer. Jughead is a close friend of Archie Andrews and Betty Cooper, with whom he used to be in a relationship with, until she abruptly ended it. They soon got back together. He is also a member of the Southside Serpents, which he recently joined following his father's arrest.

With his father sentenced to do a hard time, Jughead now has to look after his mother and little sister, as his father stated to him during one of their man to man talks. After accepting the Serpents offer of joining the gang, it has allowed him to ask for favors, when needed to find out information. He currently lives in his father's trailer, rather than having to live with his foster parents. As he stated to Betty, living in his dad's trailer home, riding his bike, made him feel that his father would always be with him no matter what.

After Jughead transferred to Southside High, even though he wasn't officially a Southside Serpent yet, they still considered Jughead as family, due to his relation to the leader. As Toni pointed out to him, he was a "Serpent by blood", stating that it was his birthright. Even though he refused at first to be apart of the gang, the Serpents still respected him and would protect him by having his back whenever they're needed.

It wasn't long after joining the Serpents that Jughead came back in contact with Penny Peabody, otherwise known as the Snake Charmer, who trapped him into becoming her personal drug-runner, thus fulfilling the debt that his father failed to pay. Due to the surveillance video that Penny acquired of Jughead (and Archie) making a drug drop off, he is now forced to regularly traffic her drugs from the Southside of Riverdale to a warehouse in Greendale.

Should he misbehave or fail to comply, Penny threatened to send the surveillance video to the police. However, his father took his place as Penny's drug runner upon his release. With Jughead refusing to accept this as their only option, he rallied the younger Serpents and they took care of Penny by driving her out to Greendale, and removing her Serpents tattoo, thus banishing her from ever returning to the Southside.

Due to Penny's activities, Jughead broke up with Betty. Jughead and his Serpent friends were re transferred from Southside High to Riverdale High School after the former was shut down due to drug complications, thought it was actually Mayor McCoy doing it one behalf of the Lodges for their SoDale project while she was paid money for her re election campaign. He also helped Betty find her long lost older brother, Chic Cooper.

Chic was then brought home back into the Cooper's lives. When interviewing Toni Topaz's grandfather, he discovered that Riverdale's founder, General Augustus Pickens slaughtered most of the Uktena tribe to found Riverdale, and the remaining Uktena formed the Southside Serpents. He and the Serpents protested on Pickens Day at Pickens Park, only for Hiram Lodge to silence them.

Afterwards, Pickens' statue was decapitated and the Serpents were blamed. Sunnyside Trailer Park was put up for eviction following the incident. They called Penny to return to help them, who wanted revenge on Jughead. They eventually found out that Tall Boy had decapitated the statue on Hiram Lodge's orders in the hopes that he could usurp Jughead and FP. For his betrayal, Tall Boy was exiled.

Afterwards, Jughead and Betty reconciled as a couple and had sex. Jughead and FP organised a meeting between Hiram and Veronica Lodge, to which Hiram called off the Sunnyside eviction which they agreed to and asked to be pardoned for his crimes, to which Jughead and FP refused. Jughead was called in by Betty and she told him the death of the drug dealer who had business with Chic Cooper, her long lost older brother. He helped her dispose of the man's car, while FP dug a hole and hid the body in it out of support for his girlfriend and the Cooper family. 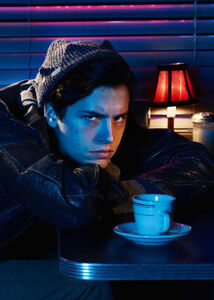 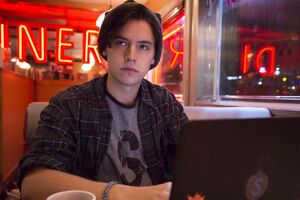 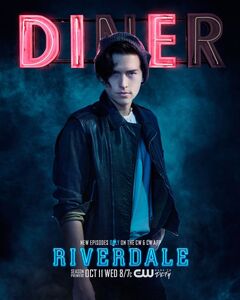 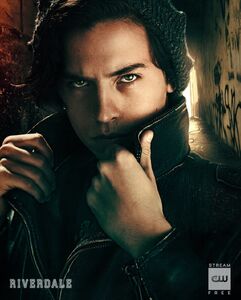 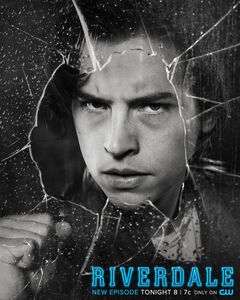 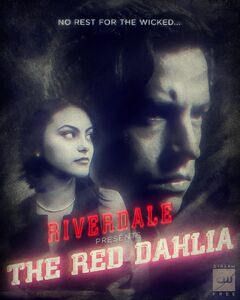 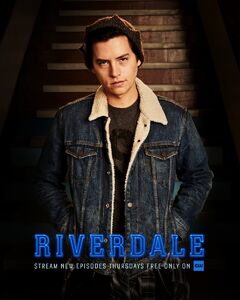 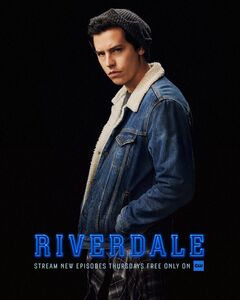 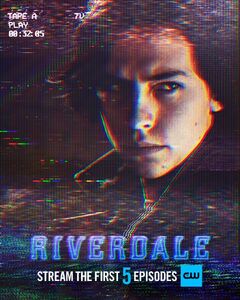 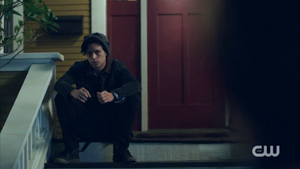 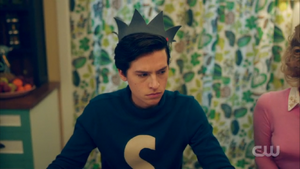 Jughead in his classic costume. 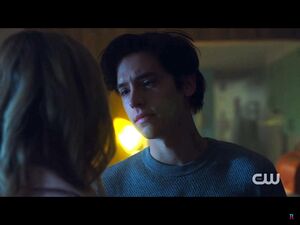 Jughead telling Betty he loves her. 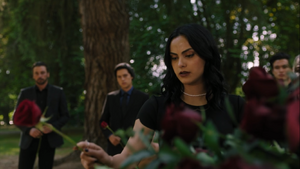 Jughead with his father, attending Fred Andrews' funeral as they see Veronica paying her respects.
Add a photo to this gallery

Retrieved from "https://hero.fandom.com/wiki/Jughead_Jones_(Riverdale)?oldid=1899803"
Community content is available under CC-BY-SA unless otherwise noted.