Stop the asteroid so he and Peaches can be married (succeeded).

Julian is a mammoth and is the fiancé and later husband of Peaches. He is the tritagonist in Ice Age: Collision Course.

Julian is a caring and fun mammoth who loves Peaches and is willing to do anything for her. He enjoys giving gifts and hugs. Julian is kind to all creatures. He has a brown pelt, with dark brown scalp hair and light blue eyes.

Julian, after watching his fiancée, Peaches, win hockey against her father, told her how great she was. He walked on the ice, and slipped. Peaches quickly tried to help him, and they lovingly slid around the ice together, laughing. Julian gave Peaches' mother, Ellie, buttercup flowers. Ellie really liked them and told Julian he didn't need to keep giving her presents. Julian said it made him happy. To Manny, Julian said he'd give the best gift of all. He gave Manny a giant bear hug. Manny was uncomfortable, and pushed Julian gently off of him.

At Manny and Ellie's Anniversary, Julian was very excited. Manny, though acting a little nervous, put fireworks in the sky. Though Julian didn't know this, Manny was taking credit for the fireworks and didn't do it. Julian spilled the beans and told Manny and Ellie that he'd miss them so much when Peaches and him left. Peaches choked on the apple she was eating and told Julian she hadn't told them yet. Julian backed up as Manny walked toward him and talked to both Peaches and Julian about it. The fireworks turned out to be a meteor shower. They ran and hid in an Ice Cave until they thought it was safe.

Buck, a weasel and old friend of the herd, returned from underground and told the herd of an asteroid, greeted Julian and the rest of the newer members of the herd, and led them after that. In a forest, during a electrical storm, Peaches was stuck as purple lightening zapped around her. Julian attempted to save her, but couldn't because the cliff would break. Peaches had a plan to get out, and did. Manny and Ellie, confused about why Julian hadn't helped her ran to Peaches and broke the cliff, though Julian warned them. Ellie and Manny were trapped but saved by their friend,  Diego, a Saber-tooth tiger.

Manny asked Julian if he wanted to play hockey with him, and Julian, shocked and very excited, said yes. It was hard for Julian to stop the puck. Finally, Julian stopped the puck and was so excited that he called out to Peaches she'd have a new hockey partner when they left. Manny hit the puck extremely hard and hit Julian in the head. Julian fell threw the ice and into the water. Cold and wet, Julian was comforted by Peaches. Later, in the morning, Granny, a ground sloth, who was Sid's grandmother, was missing. They heard her yelling and followed it.

Entering Geotopia, a place of crystals and where animals stayed in their youth, they found Granny getting massages from a prehistoric rabbit called Teddy. Watching animals zooming on hoverboards, Julian cheered. Brooke, a sloth, pinched Julian's cheek, making him laugh. She took him to their leader, Shangri Llama, on crystal hover boards. Julian and Peaches sat by Geotopian water. Peaches was upset about the end of world and possibly never marrying Julian. Julian comforted her, telling her that your life flashes before your eyes just before you die and that he'd fall in love with her again. Peaches, now a little happier, said he's the only one that could make that sound good, and they cuddled. Sid later broke the Geotopia wall, trying to get a crystal for his love, Brooke. The Geotopians agreed to give up their crystals to put in a volcano and change the direction of the asteroid. Manny and Julian managed to get a giant crystal in.

At Julian and Peaches' Wedding, Manny walked Peaches to him and passed her trunk to his, and Peaches and Julian lovingly looked at each other as a Hyrax married them together. They both said "I do." and Brooke sang My Superstar for their wedding as well. 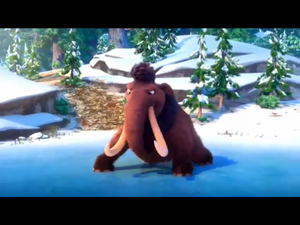 Julian Playing Hooky With Manfred While Peaches Watching Him

Julian And Peaches Are About To Get Married

Julian: Oh Yeah Woah (Manfred: Bring It In Bro-Son Welcome To The Family)
Add a photo to this gallery

Retrieved from "https://hero.fandom.com/wiki/Julian_(Ice_Age)?oldid=1684179"
Community content is available under CC-BY-SA unless otherwise noted.